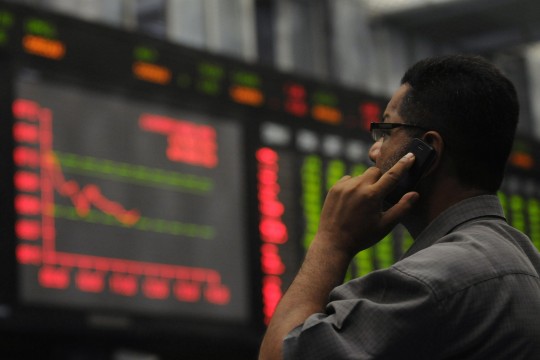 
The Pakistan Stock Exchange endured a range-bound trading session on Wednesday as the benchmark KSE-100 index faced both bullish and bearish pressures but ended the day on a negative note.

The trading session started on a positive note but it registered a sharp decline around midday as investors weighed the impact of global equity sell-off.

Moreover, the release of dismal data that showed Rs3.2 trillion fiscal deficit for Jul-Mar FY22 further dented the confidence of investors, leading to profit-taking later in the day.

Earlier, the KSE-100 index jumped as soon as trading began, touching intra-day high of 45,958.37 points. However, the bullish spell ended later as the market entered the negative territory towards midday.

From that point onwards, the bearish pressure continued to haunt the market, where the index ended the day on a negative note.

“On the flip side, Cnergyico, Habib Metropolitan Bank and Bank AL Habib saw some buying interest as they added 52 points collectively,” the report added.

A report of Arif Habib Limited stated that the PSX had a range-bound session and the KSE-100 index remained volatile throughout the day due to expectations of rate hike in the upcoming monetary policy as Kibor reached a 13-year high.

On the contrary, a rally was witnessed in the refinery sector due to rumours of approval of refinery policy, it said.

The last trading hour witnessed profit-selling across the board, which resulted in the session ending in the red zone, the report added.

Main board activity remained dull, although hefty volumes were witnessed in third-tier stocks.

JS Global analyst Neelam Naz said that correction continued at the stock market as the index closed at 45,533, down 284 points day-on-day.

Investors booked gains in Fauji Fertiliser Company after its result announcement where it declared a dividend of Rs3.7 per share and earnings of Rs4.9 per share for the Jan-Mar quarter, she said.

Overall trading volumes increased to 223.8 million shares compared with Tuesday’s tally of 210.2 million. The value of shares traded during the day was Rs5.6 billion.

Shares of 331 companies were traded. At the end of the day, 116 stocks closed higher, 186 declined and 29 remained unchanged.

Foreign institutional investors were net sellers of Rs11.9 million worth of shares during the trading session, according to data compiled by the National Clearing Company of Pakistan.