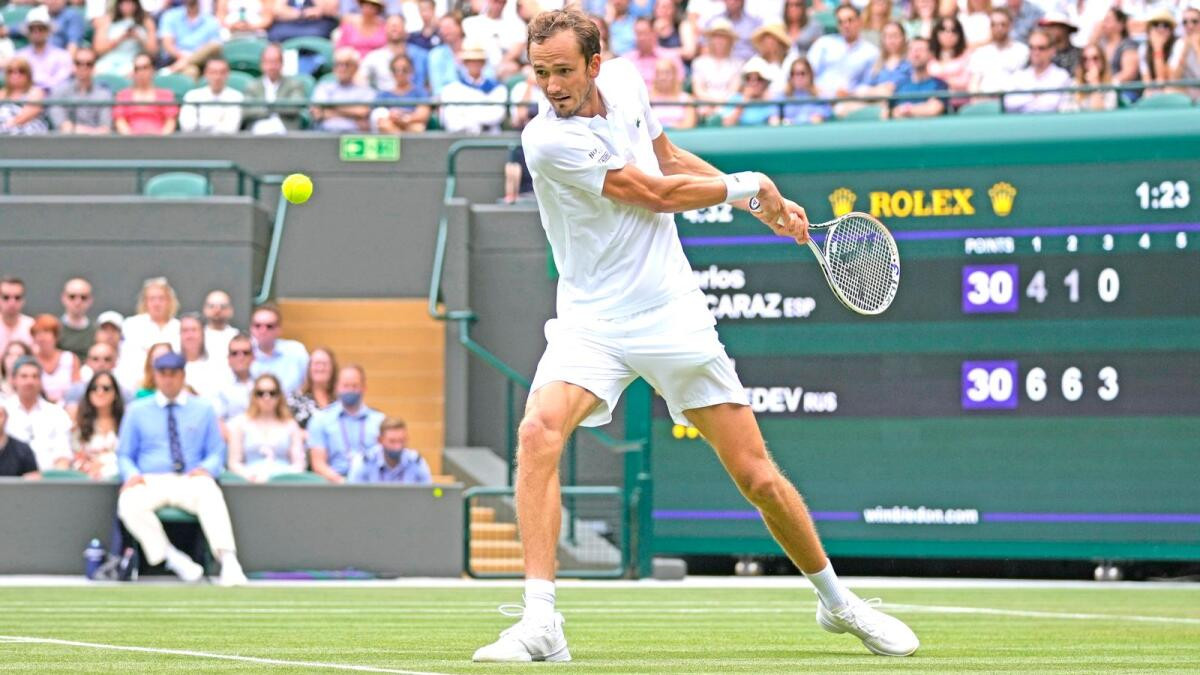 
Wimbledon banned Russian and Belarusian players from this year’s Championships to avoid “being used to benefit the propaganda machine of the Russian regime”, tournament chiefs said on Tuesday.

The All England Club (AELTC), which runs the grasscourt Grand Slam, announced the move last week in response to Russia’s invasion of Ukraine.

It means stars such as US Open champion Daniil Medvedev, Andrey Rublev, Aryna Sabalenka and Victoria Azarenka cannot play at the event, which starts in late June.

The decision was criticised by the ATP, which runs the men’s tour, and women’s tour organisers the WTA, while Rublev labelled it “complete discrimination” and defending Wimbledon champion Novak Djokovic said it was “crazy”.

But AELTC chairman Ian Hewitt defended the move, saying the decision was made after careful consideration, taking into account UK government guidance for sporting bodies with the aim of limiting Russia’s influence.

“These are in effect two options – declining entries or allowing entries but only with specific written declarations (against the invasion of Ukraine) from individual players,” he said at Wimbledon’s annual media briefing.

He added: “First, even if we were to accept entries from Russian and Belarusian players with written declarations, we would risk their success or participation at Wimbledon being used to benefit the propaganda machine of the Russian regime, which we could not accept.

“Second, we have a duty to ensure no actions we take should put players or their families at risk. We understand and deeply regret the impact this decision will have on every individual affected and so many innocent people are suffering as a result of this terrible war.

“But… we believe we have made the most responsible decision possible in the circumstances and that, within the framework of the government’s position, there is no viable alternative to the decision we have taken in this truly exceptional and tragic situation.”

Hewitt rejected accusations of discrimination, saying it was a “considered view” after a process that included conversations with players directly affected.

As the Grand Slam tournaments are autonomous, possible sanctions by the ATP and the WTA could include a refusal to award ranking points at the event, which runs from June 27 to July 10.

That could reduce Wimbledon to the status of a high-profile exhibition event.

Players representing Russia and Belarus are currently allowed to take part in ATP and WTA events but are barred from competing under the name or flag of their countries.

Their national teams have, however, been banished from the Davis Cup and BJK Cup competitions.

The WTA and ATP are holding meetings in Madrid this week to decide how to react.

AELTC chief executive Sally Bolton said officials were in daily communication with the tours, adding: “We continue to make the case for why we have made the decision we have made and the unique set of circumstances we find ourselves in here in the UK. They absolutely appreciate that.”

Bolton also revealed that discussions were taking place with the British government regarding Russian and Belarusian coaches and other officials but confirmed Russian media outlets would be banned.

Spectators and club members from the two countries will be able to attend.

World number one Djokovic will be able to challenge for his seventh Wimbledon crown after the officials confirmed players would not be required to be vaccinated against coronavirus.

The unvaccinated Serb was deported from Australia in January after losing a last-ditch court bid to stay in the country – denying him the chance to defend his Australian Open title.

Last year’s Covid-related restrictions at Wimbledon, which included reduced crowds for most of the tournament and strict conditions imposed on the players, will all be lifted.

“We are planning to return to a normal Championships this year,” said Bolton. “And so we don’t intend to implement any of the Covid-19 measures that we saw last year in any substantial fashion.”