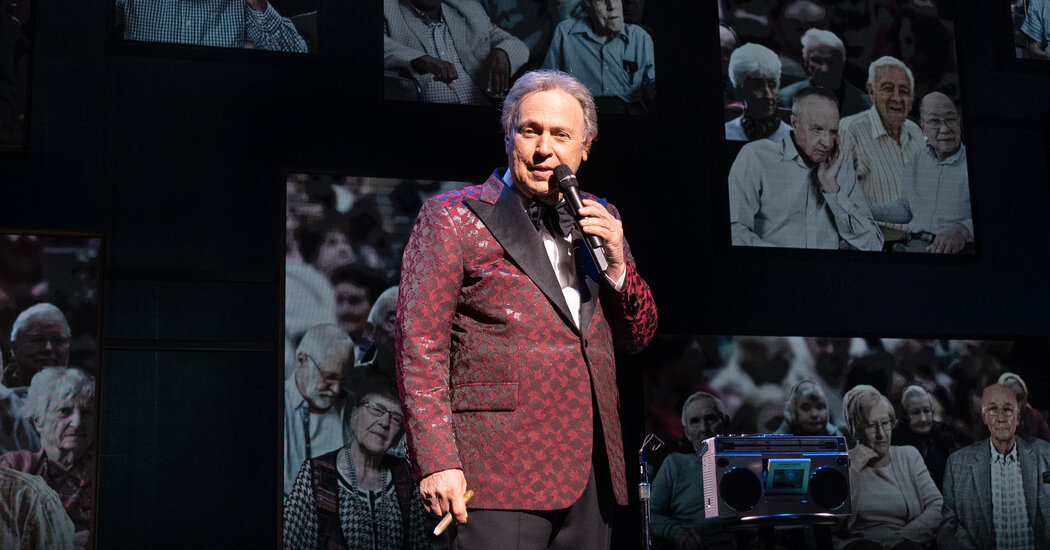 On the heels of “City Slickers,” just a few years after “When Harry Met Sally,” Billy Crystal was at the apex of his film stardom when he made the 1992 movie “Mr. Saturday Night.” If you watch it now, you can see why it flopped, not least because Crystal was playing against type as Buddy Young Jr., a ruthlessly selfish has-been comic with a vicious streak.

At the time, Crystal was in his 40s; for much of the film, Buddy is in his 70s. And Crystal embodied him with a middle-aged comedian’s idea of that later phase of life: under old-guy makeup so egregious that viewers couldn’t possibly suspend disbelief, and with the physical mannerisms of an ancient — like Miracle Max, Crystal’s indelible elder from “The Princess Bride,” but without the charm.

Three decades later, Crystal too is in his 70s, and in the new musical comedy “Mr. Saturday Night,” which opened on Wednesday night, he slips much more naturally into Buddy’s skin. As a piece of theater, the show is a bit of a mess; the jokes, even some of the hoary ones, work better than the storytelling, and the acting styles are all over the place. Still, it makes for a diverting evening — because it will almost surely make you laugh, and because of how acutely tuned into the audience Crystal is.

Ad-libbing his way through the script, fine-tuning the funniness, he feeds off the energy of the crowd at the Nederlander Theater. Like Buddy, who mopes around his New York apartment in a tragic cardigan, lamenting the gigs he’s been reduced to taking — the morning slot at a retirement center is, after all, no comedian’s dream — Crystal is utterly in his element performing live. If you are a fan of his, or simply someone who has missed that kind of symbiosis between actor and audience, it’s a pleasure to watch.

The musical, though, is an ungainly beast, by turns zany and sentimental. Directed by John Rando, with a mood-setting score by Jason Robert Brown (music) and Amanda Green (lyrics) that goes vocally easy on its star, it has a book by the film’s screenwriters, Crystal, Lowell Ganz and Babaloo Mandel. Less cynical and more hopeful than the movie, it gives us a Buddy who is still cruel but not so callous, and thus a better candidate for our sympathy.

That’s despite the myriad ways in which he has failed his brother, Stan (the immensely likable David Paymer, an Academy Award nominee for the same role in the film), who has sacrificed his own ambitions to be Buddy’s manager; his wife, Elaine (Randy Graff, stymied by an almost total lack of chemistry with Crystal), who has put Buddy first for half a century; and their daughter, Susan (Shoshana Bean, in a beautifully calibrated performance), who at 40 has been justifiably angry with her father since she was 5.

“Mr. Saturday Night” traces Buddy’s second chance at life and fame, set creakily in motion one night in 1994, when he catches the in memoriam montage on the Emmy Awards broadcast and sees his own face and name appear right after John Candy’s. Buddy gets booked on the “Today” show to crack wise about the error.

As his career wobbles toward possible resuscitation, he gradually notices that he’s been a schmuck to the people who love him. “Hurt them” is the command he has always used to psych himself up before he goes onstage, but however many audiences he’s killed, he’s done lasting harm at home.

In the film, the brothers’ relationship is paramount. In the musical, the father-daughter fracture comes to the fore, while Elaine — whose only solo, a fantasy about going to Tahiti, is the show’s most cuttable song — is again strikingly under-imagined. (The six-piece orchestra, which sounds terrific, is conducted by David O.)

“Mr. Saturday Night” means to be a valentine to both the bonds of family and the comedians of a bygone age — pros like Buddy, who got his big break in the 1940s at a Catskills resort and hosted a hit TV show on Saturday nights in the ’50s, before he blew a hole in his career with his loose-cannon arrogance.

As for Crystal’s singing, he doesn’t have the range to play Fanny Brice, but he doesn’t need to. He does OK. Paymer, in Stan’s one emotional outburst set to music, kind of, sort of, almost approaches singing but doesn’t have those chops. Which works on a meta level, because Buddy is the brother who’s at ease onstage.

What’s surprising is how unpersuasive the show is when the principals play decades-younger versions of their characters — a transformation that in theater, so much less literal a medium than film, can require no more than an altered demeanor. Bean is the only one to tap into that simplicity.

But most of the show unfolds in 1994. By then, Buddy’s old sidekicks are fixtures at the Friars Club, and so is he. Though if Lorraine is a member, she must be a relatively recent one; in the real world, the Friars Club of New York admitted its first female member, Liza Minnelli, in 1988.

This is where nostalgia gets tricky. That boys’ club territoriality is the backdrop to an encounter at the Friars that the authors have kept largely, and unwisely, unchanged from the movie: when Buddy, expecting a powerful male agent to join him for lunch, is met instead by a smart young female agent, Annie (a sunny Chasten Harmon, who has a fizzy chemistry with Crystal).

Annie, who will prove to be a godsend for Buddy, handles comics for a major agency. Yet she has never heard of any of the comedy greats whose names he fires off at her in a bullying pop quiz, or even, apparently, of the Friars Club — implausible for an industry professional, and almost impossible so soon after the Friars’ infamous 1993 roast of Whoopi Goldberg. Annie is written as ignorant just so that Buddy can school her, which carries a strong whiff of dinosaur on the authors’ part.

Of course, Buddy himself is a caveman. When his old pals called him and Elaine “Fred and Wilma” — as they did, affectionately, at the performance I saw, Crystal not being the only one enlivening the script with variations — it was funny because it’s true.

But Buddy does want to evolve, at least a little. If his epiphany about his need to change seems to arrive out of nowhere, buoyed by piano and brass in a lovely, impassioned solo, we root for his redemption anyway.

This is a musical that wants its guy to get a happy ending. Despite all of the show’s faults, and all of Buddy’s, it turns out that so do we.