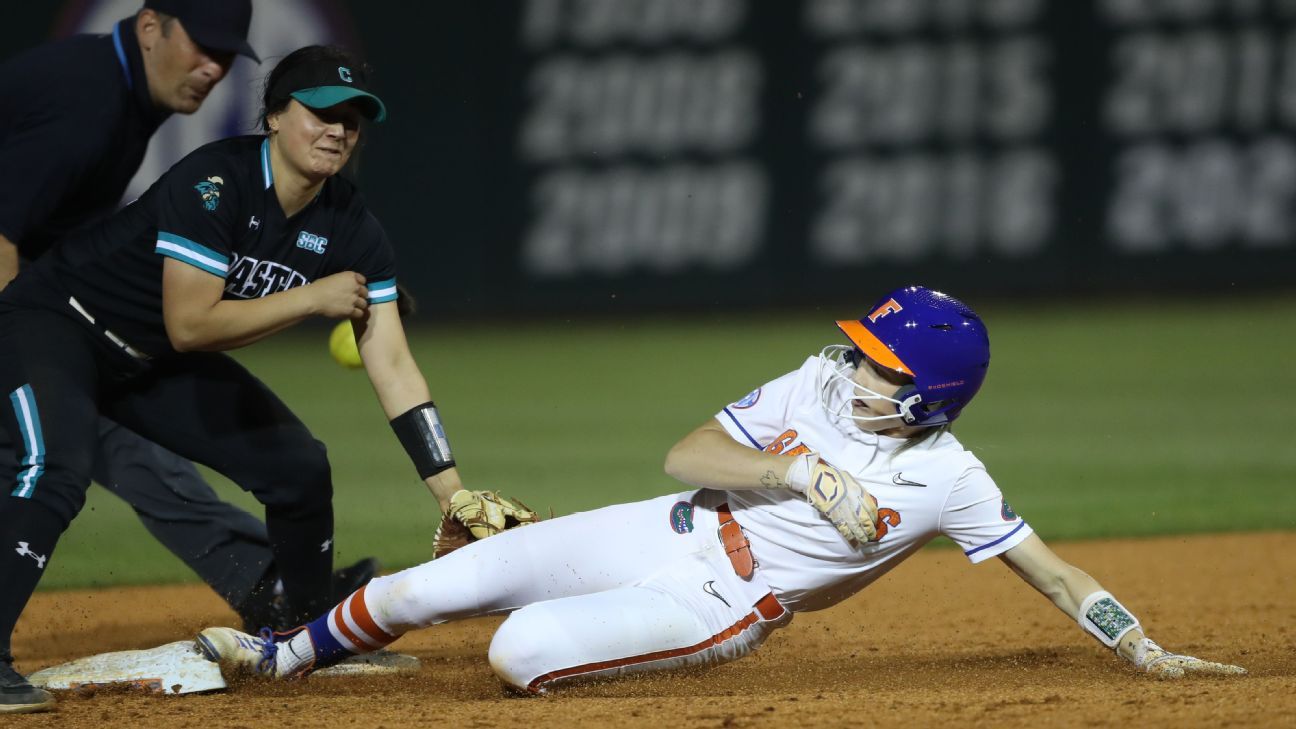 TIM WALTON HAS a drill he likes to run during fall camp. Every Tuesday, Florida’s softball coach for the past 18 years gathers the top six hitters and runs an offensive simulation against the pitching staff.

Then he steps back — like way back. As in, the players call their own signs.

“It’s really cool,” Walton said, “because it gives them a little more ‘This is what I want to do,’ as opposed to, ‘This is what Coach tells me to do.'”

As he looked on this past fall, he saw a lineup capable of producing runs in a variety of ways. While the Gators had decent power, they also had a habit of stretching singles into doubles and doubles into triples. They stole bases and laid down bunts, sacrificing the runner into scoring position or catching the defense off guard for an infield hit.

Three-quarters of the way through camp, Walton started to realize this wasn’t going to be anything like the 2011 team that hit 124 home runs. Nor would it be like the 2021 team that was conservative on the basepaths.

So he found the dry erase board he keeps in the batting cage and wrote his entire sign card on it — a laundry list of plays like bunt, squeeze, hit-and-run. Then he handed batters different colored markers to put down one of three options beside each sign:

The whole exercise, from the six-person lineup to rewriting the sign card, brought into focus what the team wanted to be, which to Walton’s way of thinking might as well be the same thing as what it needed to be.

His favorite manager of all time is Earl Weaver, who led the Orioles to a World Series in 1970 and was later inducted into the Baseball Hall of Fame. Like Weaver, Walton would love nothing more than to start out every game with a walk, a hit by pitch and a three-run homer. It’s the easiest way to coach, he said, and a reflection of what modern softball has become, shirking so-called “small ball” in favor of high-percentage plays and power.

To play to his team’s strengths, the Gators would need to buck that trend. Instead, they’d be built on speed and aggressiveness on the basepaths. They’d be a lineup of slashers who would test Walton’s resolve.

But honestly, he said, coaching that way, “It’s a lot more fun.”

THE ONLY PERSON who’s unhappy these days is Florida’s equipment manager because the team is going through pants at a record pace, shredding the fabric around the knees and sides from so much sliding in the dirt.

But the shift in philosophy is working. The Gators, fifth in the country in RPI, are currently the only team in the D1Softball Top 25 poll that is also among the top 25 teams in stolen bases per game.

No. 6 Arkansas, No. 16 Tennessee and No. 17 Clemson each have one player in the top 50 of stolen bases nationally. No. 10 Florida, meanwhile, has two in the top 20: Skylar Wallace and Kendra Falby.

Wallace was already something of a known commodity in the SEC entering this season. A former top prospect in the state of Georgia, she began her career at Alabama, where she started 90 of 92 games as a freshman and sophomore in 2019-20. After redshirting last season, she was one of many new faces expected to make an immediate impact.

Falby was the other. And to hear Walton tell it, it was clear right away that the true freshman from Odessa, Florida, had what it took to be a difference-maker.

“I’ve never had a player of her speed,” Walton said. “I mean, it’s world-class speed. And she can actually catch the softball, throw the softball, hit the ball. She’s just something that’s so unique.”

Falby is so fast, he added, “If you blink, she’s gonna be on second base.”

But it’s not just her speed that blew Walton away. He could dish out jaw-dropping figures, like how quickly she can run to first base, or first to third. Instead, it’s her 36-inch vertical leap.

“You look at her and you see this girl who is about 5-7, 5-8 and looks like she’s like 100 pounds,” she said. “But her strength and her speed is insane. I was there when she hit the vertical jump … To float in the air and to hold your ground and just kind of elevate even more when you’re up in the air was cra-zy.”

During the fourth game of the season, against South Florida, Falby ended the game with a highlight-reel catch in center field.

“It was like she was climbing an escalator to catch a ball in center field — on a full sprint!” Walton said.

During that tournament at USF, Falby went 9-for-17 at the plate with two walks and nine runs scored in six games. She also went a perfect 7-for-7 stealing bases.

Wallace, meanwhile, went 4-for-4 stealing bases. She said Falby and she are competitive in that respect and “really feed off each other.”

But it’s a friendly competition because if one of them sees something in the defense that she can take advantage of, she’ll tell the other. Like when they played Tennessee and they both noticed how the third baseman was cheating in and would have a hard time getting back to cover the base.

So in Game 3 of the series, with two outs, a lefty at bat and the catcher’s throwing lane wide open, Wallace stole third.

Asked the age-old question, “Who’s fastest?” Wallace said it depends. Home to first, it’s Falby. But put the race down to distance, and it’s going to be “really close.”

“It’s awesome to see her growth right now,” Wallace said of Falby. “She can do some wicked, wicked things.”

Walton said he tries to be cautious when it comes to freshmen. He remembers his first season playing college ball — how the game was moving too fast for him; how he was overwhelmed; how he couldn’t control his heartbeat.

History indicates, he said, that the freshman season is a player’s worst year.

After she went hitless just once during her first 22 games, SEC play began in mid-March, and over nine games against Mississippi State, Texas A&M and Tennessee, she went hitless five times. And because she wasn’t getting on base regularly, her stolen base numbers dipped from one per game to one overall.

Florida, which started out the season a blistering 21-1, fell back to earth at 27-5.

In the middle of that rough stretch, Falby spoke to ESPN about how defenses were playing her differently than they had earlier in the year. Suddenly the outfield had a shift on, the pitch selection had changed and the defense was playing in to try to negate her speed.

But she didn’t come across as overly worried. She said it was up to her to block it out and take what the pitchers gave her.

Even though Walton had dropped her from leadoff to the middle of the order, she was upbeat. The day-in, day-out grind of playing in the SEC was pushing her to new levels, she said.

And it showed up: Over her next 10 games, she had 10 hits, walked twice and scored eight runs.

Falby is trying not to get caught looking ahead, but she can’t help but feel excited about the sense of untapped potential on the team.

“It’s good that we’re still growing and learning each other and figuring it out,” she said. “Because once it does come together, I feel like it’s going to come together at the right moment.”

More inspiring is the fact that Florida doesn’t have to be perfect in order to win. While the Gators have some power, they don’t have to use it to score runs. As long as someone reaches base, they’re a bunt or a steal away from being in scoring position.

Wallace has preached to the younger players like Falby not to worry if they don’t get a pitch they like during an at-bat; take the walk. If they pitch you inside, she said, “Wear it because that [hit by pitch] is going to be huge.”

On Tuesday, in the sixth inning of a scoreless game against USF, Wallace didn’t press. She took a walk on five pitches and promptly stole her 37th base of the season — a new record at UF. And when the throw to second bounced into center field, she took third base and then went for home, scoring the winning run.

Wallace said the Gators’ mini-slump to start out SEC play came down to letting distractions get the best of them. While she doesn’t want to downplay the losses, she knows there’s time to improve.

The only goal, she said, is a championship.

“I absolutely think we’re on that path,” she said. “It’s just a matter of time until we get there.”

Walton has hammered home a simple phrase to his team all season: “Speed doesn’t slump. Confidence does.”

“The fate of Florida softball for the 2022 season is … if and when we get it going consistently, we’re going to be a tough team to beat because of the ability to put pressure on you over and over and over again,” he said. “And then you’re worried about the speed and maybe you don’t want to throw a change-up and maybe you hang a pitch over the plate and someone’s gonna hit it over the fence.