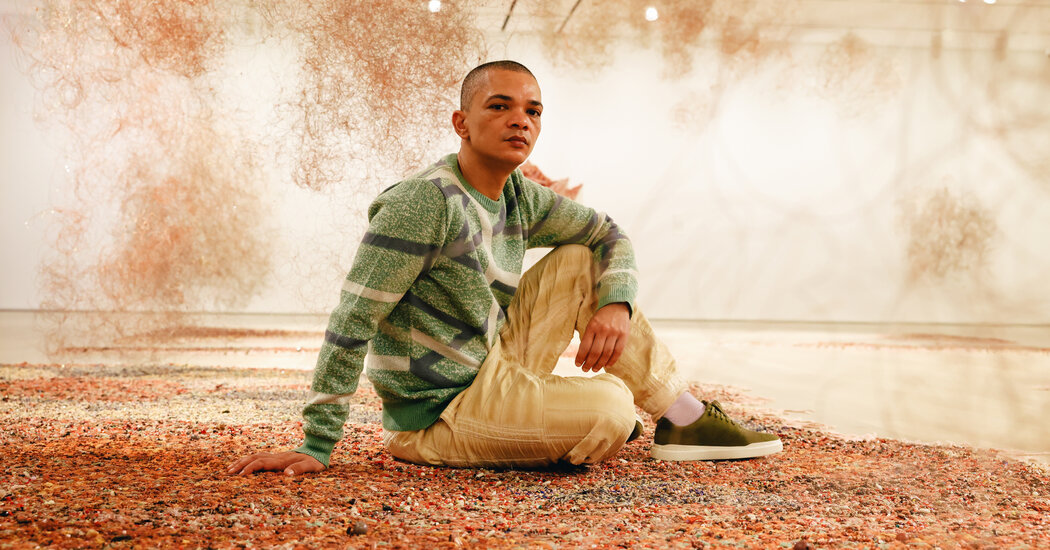 His path passed through a woman-led Sufi community, graphic design studies at a technical college, and eventually an art-school diploma. By then much had changed. For his graduation show he recreated his grandmother’s living room; she came and sat there, “watching her soapies” on TV beneath his embroidered self-portraits.

The Chicago show includes a hall tiled with linoleum squares he collected from homes in Bonteheuwel. Many families, even poor one, replace their linoleum every Christmas, he said. “That act I find quite hopeful. But a part of me also identifies with things being of no value, and making them valuable.”

Hendrik Folkerts, a former Art Institute curator who organized the show (he is now at the Moderna Museet in Stockholm), said that Adams’s art has grown outward, coming to terms with the home first and gradually the world. “He has gone from a very interior space to the actual land,” Folkerts said.

Their land is fraught but to them it is compelling. Although Cape Town is known to Black South Africans for its unbothered white privilege, in comparison to Johannesburg, Katz, who has tried both cities, said she found it necessary to stay there. “It’s important to take up space in Cape Town,” she said.

As for Adams, though his desire lines have taken him far, he has never truly left his Bonteheuwel community, where for every social ill there was also some offsetting mechanism of solidarity. Now it’s his turn. His atelier employs friends, neighbors, aunties. His studio manager, Morné Roux, is a childhood pal who got his first passport for the trip to Chicago.

At the atelier, they call Adams “Pa,” or father. He can’t stand it; they won’t stop. “It’s a beautiful community,” he said. If his output is prolific, it’s also because he’s looking after his people. “It’s a massive responsibility,” he said, no complaint in his tone. “I can’t drop the ball.”