Canvases, Clay and Cameras, Preserving the Spirit of Ukraine 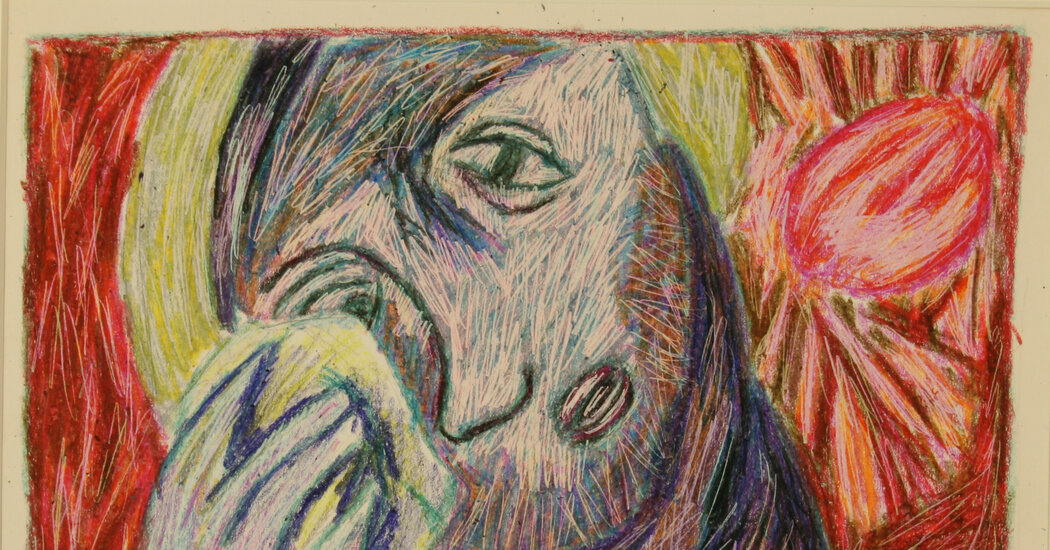 This article is part of our latest special section on Museums, which focuses on new artists, new audiences and new ways of thinking about exhibitions.

Nikita Kravtsov, a Ukrainian artist born in Crimea and now based in Paris, recently traveled to New York, where he completed nine brightly painted works on paper. A 1909 publication of “The War of the Mushrooms,” illustrated by the prominent Ukrainian graphic artist Heorhii Narbut, inspired Mr. Kravtsov’s new creations, which reimagine that classic Slavic fairy tale of good and evil through scenes of Russia’s current war with Ukraine.

Mr. Kravtsov’s work portrays Ukrainian soldiers as mushrooms, the Russians as peas. One illustration depicts Vladimir V. Putin, the president of Russia — King Pea — at one end of a long table in a bunker, isolated from his advisers. Another represents Ukraine’s battle for Snake Island in the Black Sea, a strategic spot in its territorial waters.

“It was very important for me to show the reality of what is happening,” Mr. Kravtsov said in an interview, “to show the heroic fighting for the freedom of my country. Putin is trying to change the past, but there is no future without the past.”

Maria Shust, the director of the Ukrainian Museum in New York, where Mr. Kravtsov’s series “The War of the Mushrooms” is on view through the summer, said there was a strong tradition of displaying Ukrainian art in the United States. It became a means for Ukrainians in the diaspora to prove their country’s existence, she said, an effort stemming from the early 1930s. “Four million Ukrainians died in the famine instigated by Stalin, and Putin is doing the same thing,” she said, referring to the disaster known as the Holodomor.

There is also a strong tradition among Ukrainians — and not just wealthy ones — of supporting artists. “If you are an immigrant fleeing the country, what do you take with you, especially during a war?” Ms. Shust said. Many bring artwork with them, she said, such as dozens of rare pysanky — Ukrainian Easter eggs — that were taken when their owner escaped during World War II, which are in the exhibition “In Bloom: Nature and Art.” Other shows include “The Impact of Modernity,” with rarely shown 19th- and early-20th-century works and avant-garde experimental art from 1910-30, and “The Ceramic World of Slava Gerulak,” an artist based in New York.

Two exhibitions are expected to open by early May. One will feature photographs of the war by Maks Levin, a Ukrainian photojournalist who was found dead on April 1 in a village outside Kyiv. Another will consist of rotating displays in the lobby about museums that have been bombed during the war, with photographs taken before and after the destruction.

A number of institutions across the country focus on Ukrainian culture and history through permanent and special exhibitions of archival material, traditional folk arts and fine art. Many offer workshops, lectures and other events. Here is a roundup:

The Ukrainian Art Center, a one-room museum and gallery nestled in the Ukrainian Cultural Center in Los Angeles, lacks the organization — and the space — of more established institutions, but its president, Daria Chaikovsky, is often on hand to share information with visitors. The collection, she said, includes works by the Ukrainian artists Alexis Gritchenko, Kateryna Krychevsky-Rosandich and Bohdan Borzemsky. It also houses large-scale contemporary pieces by Ola Rondiak, an Ohio-born artist who explores her Ukrainian heritage through vibrant painted portraits of women, as well as sculptures modeled after traditional Ukrainian motanka dolls.

About 20 percent of the Ukrainian Museum and Library of Stamford’s extensive holdings — the book-and-periodical collection alone contains more than 60,000 items — is typically on view. Displays running through the summer include a selection of painted landscapes, Byzantine icons, wood carvings and rare books, some from the 15th and 16th centuries.

Through June 4, at the Ukrainian Institute of Modern Art in Chicago, the interactive exhibition “Protest Art Call for Participation” invites the public to share its responses to the war in Ukraine through drawings, writings and poetry. Tables are set up with supplies, and protest-themed works from the permanent collection by Ukrainian artists like Anton Kandinsky and Jurij Solovij are hung nearby for inspiration. In early June, the institute will host a survey of the modernist painter Michel Andreenko, a Ukrainian-born refugee who lived in Paris. Before his death in 1982, he asked the Chicago-area owners of the collection “to be keepers of his work in the United States, because he was scared of Soviet reprisals,” said Adrienne Kochman, the institute’s curator, referring to incidents of artists’ “being picked up by the K.G.B. and disappearing, to be found dead later.”

At the Ukrainian National Museum in Chicago, the subjects of exhibitions on view now through the end of the year include genocide in 1932-33, refugees fleeing after World War II and paintings by Ivan Marchuk, an 85-year-old artist in Kyiv known for creating a technique of applying paint in intertwining fine lines. “At the beginning of the war in February, he wrote that he was happy ‘his children’ — his paintings — were protected in the U.S.,” said Maria Klimchak, the museum’s curator. “He is the van Gogh, the Monet, for Ukrainian culture.” A presentation on the impact of war on children through the eyes of Ukrainian journalists and photojournalists will open in May.

The Ukrainian American Archives and Museum near Detroit currently features “Treasures of Our Homeland,” a collection of decorative and utilitarian cultural artifacts like traditional festive embroidered garments and textiles, and “Batik Designs and Creations,” -comprising the work of Chrystyna Nykorak, a local textile designer of Ukrainian descent.

How the Ukraine War Is Affecting the Cultural World

Valentin Silvestrov. Ukraine’s best-known living composer, Mr. Silvestrov made his way from his home in Kyiv to Berlin, where he is now sheltering. In recent weeks, his consoling music has taken on new significance for listeners in his war-torn country.

Alexei Ratmansky. The choreographer, who grew up in Kyiv, was preparing a new ballet at the Bolshoi Theater in Moscow when the invasion began, and immediately decided to leave Moscow. The ballet, whose premiere was set for March 30, was postponed indefinitely.

Highlights at the Ukrainian History and Education Center in Somerset include religious and audio materials, as well as a genealogy group that helps participants research their Ukrainian heritage. A current exhibition, “Autonomy Lost and Regained,” which opened in 2021, “has proven to be eerily prescient,” said Michael Andrec, the center’s archivist. “It deals with the fraught relationship between Ukraine and Russia in the realm of religion, but also touches on geopolitics, culture and art.” Forthcoming exhibitions will explore the Holodomor, “particularly the representation of that genocide in art,” he said.

The Ukrainian Institute of America in New York features exhibitions of Modern and contemporary artists from Ukraine and of Ukrainian descent. A midcareer survey of paintings, sculptures and graphics by Oleh Denysenko, currently living in Lviv, will be on view from May 20 to June 19. The artist, who is best known for his intricate etchings that depict fantastical and metaphorical subjects, will have recent works in the show that are rendered in a new technique he has created. The technique, which he calls “gessography,” combines the age-old methods of engraving with gesso and painting. An exhibition of sculptures, paintings and drawings by the 20th-century artist Alexander Archipenko is on view through Dec. 31.

Thousands of photographs depicting life in Ukraine and the diaspora, newspapers and periodicals dating from 150 years ago to the present, and 17th-century maps are among the items at the Ukrainian Museum-Archives in Cleveland. The current exhibition features work by Sasha Maslov, a Kharkiv-born photographer living in New York. Titled “Ukrainian Railroad Ladies,” it spotlights the women who work as traffic officers at railroad crossings and explores their lives and why their profession still exists in the 21st century.

Olga Liskiwskyi, the executive director of the Ukrainian American Archives and Museum, said that since the war broke out, she and colleagues at other institutions have seen renewed public interest in visiting and in helping refugees. In Ukraine, museums, libraries and archives are rushing to safeguard their treasures. Saving Ukrainian Cultural Heritage Online, an international group of more than 1,300 cultural heritage professionals, is helping Ukrainian institutions preserve documents, artworks and other materials digitally.

“For many decades, the Ukrainian diaspora has been the keepers of the flame,” Ms. Liskiwskyi said, “because so much was deliberately destroyed in Ukraine.”