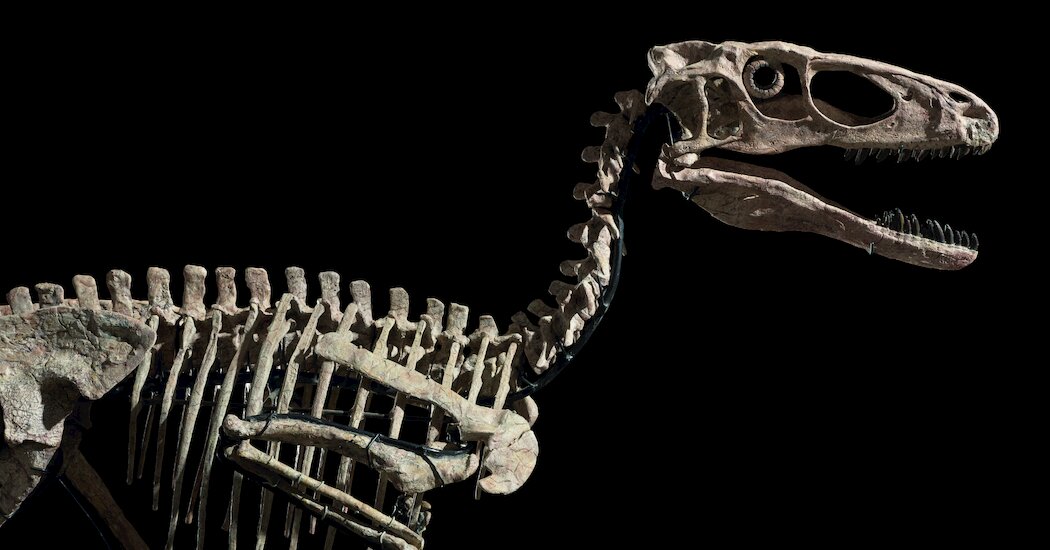 Many people know them as agile bipedal dinosaurs with menacing claws and scrunched-up arms, hunting children through a kitchen in “Jurassic Park.”

In the 1993 movie, they’re called velociraptors, but those creatures were more like a different, related species, Deinonychus antirrhopus — a name that the author of the novel “Jurassic Park,” Michael Crichton, considered a less dramatic choice.

The movie helped turn velociraptors (well, technically Deinonychuses) into one of the most recognizable dinosaurs, alongside the T. rex. And now, dinosaur enthusiasts can bid on one of their own.

The auction house Christie’s announced on Friday that it would be selling a Deinonychus skeleton it calls Hector, which was excavated from Montana several years ago. The company said it would be the first public sale of such a specimen. The estimated price tag is $4 million to $6 million, likely prompting most “Jurassic Park” fans to put their paddles down.

“It’s the dinosaur that everybody wants to see,” James Hyslop, the head of science and natural history at Christie’s, said in an interview. “As memorable as that moment is with the water glass shaking from the T. rex, the bit that really scares us is the bit with the raptors hunting those kids.”

Paleontologists have mixed opinions on the practice of auctioning off dinosaur skeletons; some are fiercely opposed to the practice, as it opens up the possibility that specimens can fall into the hands of someone who has no interest in scientific and public access but has the money to outbid a museum. (Hector was exhibited at the Natural History Museum of Denmark for a year and a half, starting in June 2020.)

“It would be a huge shame for science, and for the public, if this disappeared into the basement of an oligarch,” said Steve Brusatte, a professor of paleontology and evolution at the University of Edinburgh.

In 2020, a T. rex skeleton, nicknamed Stan, brought in a record $31.8 million, nearly quadrupling its high estimate of $8 million. The buyer was anonymous, remaining a mystery until this year, when National Geographic reported that officials in Abu Dhabi were planning to include Stan in a new natural history museum.

The auction house is taking a page from Crichton’s book in calling this lot “the raptor” and naming it Hector, both easier to pronounce than Deinonychus. Dating back roughly 110 million years ago to the Early Cretaceous period, the specimen was excavated by a commercial paleontologist, Jared Hudson, on private land at Wolf Canyon in Montana about nine years ago and was later acquired by its current owner, who is anonymous, according to the sales catalog. Of the skeleton, 126 bones are real, and the rest are reconstructed.

Meeting Hector — at about four feet tall and 10 feet long, with its tapered tail — is not like meeting the 13-foot-tall Sue at the Field Museum in Chicago. Hyslop compares it to the experience of meeting a kangaroo at the zoo, rather than an elephant.

The bones that are not real are cast or 3-D printed, making the creature something of a piece of art as opposed to purely a fossil. Most of the skull is reconstructed, which Christie’s said is common with dinosaurs of this type and size. Even Sue and Stan’s skeletons aren’t 100 percent whole.

The species’ fossils were discovered by the paleontologist John H. Ostrom in 1964, and he gave it the name Deinonychus, meaning terrible claw, after the sharply curved tool that the dinosaur, he posited, used to slash its prey. Ostrom’s discovery was foundational to how scientists understand dinosaurs today — that some were less reptilian and more birdlike: fast-moving and possibly warm-blooded and feathered.

“Before this, we were looking at them as lumbering lizards, and now we know them as very active, predatory carnivorous birds,” said Peter Larson, a veteran commercial paleontologist who mentored Hudson and helped to identify Hector’s bones when he discovered them in Montana.

Larson is a central character in the debate around fossil ownership, having led the excavation team behind Sue in 1990, before the F.B.I. seized Sue and other specimens, asserting that the team had failed to obtain a federal permit to dig. Years of court battles followed, eventually clearing Sue for auction, but Larson was prosecuted on currency violation charges involving overseas fossil sales and was sentenced to two years in prison. (He has sought a pardon.)

The Field Museum bought Sue for $8.36 million — nearly $15 million in today’s dollars — and Larson said he saw value in the high price tags: that more people would be interested in digging for new specimens. But that way of thinking is criticized by some paleontologists because they fear it will cause illegal digging to proliferate and drive up prices so public institutions can’t bid competitively.

When the dinosaur goes up for auction on May 12, Hyslop said he hoped it would go to someone willing to share it with the public, noting, “that little boy inside of me wants to see it again and again.”