HomeLife Style‘The Red Studio,’ Matisse’s Masterpiece, Gets a Life All Its Own
Life Style

‘The Red Studio,’ Matisse’s Masterpiece, Gets a Life All Its Own 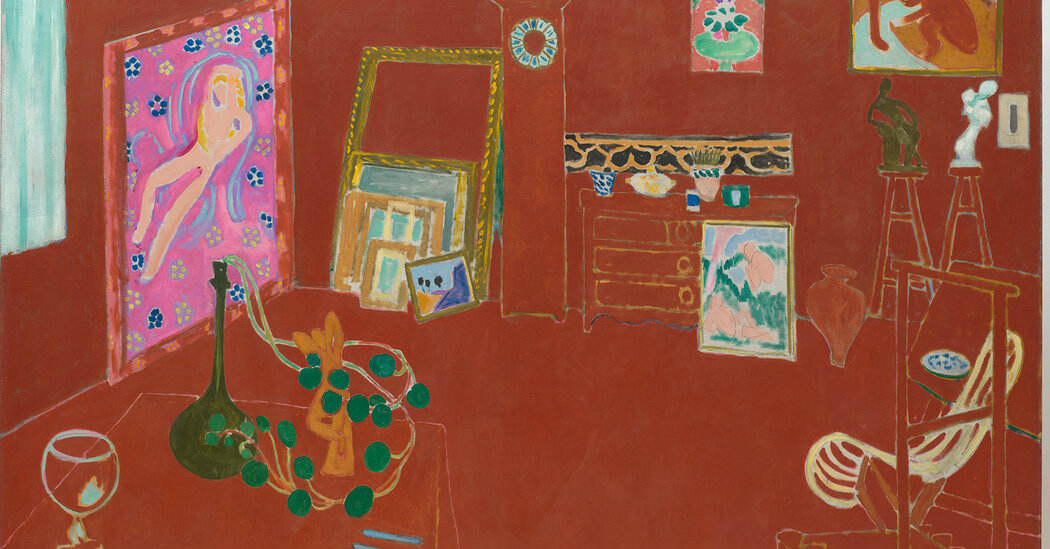 The Museum of Modern Art’s latest excursion into modernist art history by way of its astounding collection is “Matisse: The Red Studio,” a small but spectacular exhibition that dissects one of the artist’s greatest early paintings.

This show reunites — for the first time since they left the artist’s studio in the Parisian suburb of Issy-les-Moulineaux — all the surviving works that Henri Matisse depicted in “The Red Studio,” a painting whose seductive radicalness has attracted admirers since it entered the museum’s collection in 1949.

Bringing together six paintings, three sculptures and a ceramic plate in “The Red Studio” turned out to be a marvel of detective work on the part of its curatorial teams, which were headed by Ann Temkin, MoMA’s chief curator of painting and sculpture, and Dorthe Aagesen, who holds virtually the same title at SMK, The National Gallery of Denmark, in Copenhagen. Its loans come from museums and private collections near and far — including three from SMK — some that have never been exhibited before. Notable among these is a small but powerful terra cotta figure that few knew existed, even though MoMA owns the bronze cast from it.

The show is a meticulous examination of the inner and outer life of a single painting set forth in a remarkably spacious setting where each life gets its own large gallery. In the first, “The Red Studio” appears with the works it depicts, which encapsulate the artist’s early development. In the second gallery, quite a few documents, photo-murals and wall texts trace the painting’s journey from Matisse’s studio to MoMA — including a prolonged stop at a glamorous London nightclub. But there is plenty of art here which shows how the interior and studio themes, the color red and the use of monochrome recurred in Matisse’s later work, culminating in the 1948 “Large Red Interior,” the last painting he completed before liberating color from canvas in his paper Cut-Outs.

“The Red Studio” was finished in December 1911. Describing it to the Russian textile merchant Sergei Shchukin, who had commissioned it, and whose patronage enabled Matisse to build the studio, the artist wrote “The painting is surprising at first. It is obviously new.” (Many found it too new, especially its shocking color. It was among the works most reviled by critics and visitors alike in the Second Post-Impressionist Exhibition in London in 1912 and in the historic 1913 Armory Show-, seen in New York, Chicago and Boston.)

Whether Shchukin, whose great collection of early 20th century Modern art included 37 Matisses and would be confiscated by the state after the Russian Revolution, agreed or not, is lost to history. Either way, he declined to buy it. Instead, this singularly sublime painting remained in the West. At the Modern it provided a kind of polar opposite to Picasso’s singularly savage painting, “Les Demoiselles d’Avignon” of 1907, which had entered the collection a decade earlier, in 1939.

This meant that the painting was essentially free, in the cultural sense, to thrill, influence and inspire the present and to become part of history. It presages one of the staples of postwar modernity — the monochrome, or one-color painting — and arrived in New York just as several painters were getting their Abstract Expressionist chops in order. You can feel it in Barnett Newman’s blazing red “Vir Heroicus Sublimis” (“Man, Heroic and Sublime”) of 1950-51, and in some of Mark Rothko’s airy blocks of dark, smoldering color.

The obvious newness of “The Red Studio” lies in the extent of its dominant color: most of its surface is covered with Venetian red, a deep, sumptuous if slightly rusty tonality, pushing the entire scheme toward abstraction. And yet the painting is full of facts. It is a kind of manifest of one corner of Matisse’s newly built studio.

And it is also a statement of the artist’s values. The things that matter most to Matisse — from paintings and sculptures to an open box of blue pastels — are depicted here in their true colors. But most of the painting’s bulky items — two tables, two chairs, a chest of drawers and a grandfather clock whose face lacks hands, as if time stood still in the artist’s studio — appear almost as phantoms: They exist only as ocher outlines in the mass of red, brightened here and thereby little glimmers of pink and blue, felicitous leftovers from an earlier version of the painting.

For Matisse, the studio was the place where the real world receded, where magic could be made and art ruled. Once he absorbed what Fauvism had to teach him about natural light and pure color, Matisse didn’t get out much. He was essentially an artist of interiors and especially of the studio: the spaces where he lived and worked, where he painted portraits, worked from live models, sometimes including views out windows, sometimes simply portraying the rooms themselves.

In the first gallery, “The Red Studio” is surrounded by the works it depicts, which encircle it rather like a flotilla of boats around the mother ship. It is a unique experience to stand in the middle of the gallery and look back and forth from the actual works to their portrayals, as the great distiller of reality further distills his own images.

In the small, luscious “Corsica, The Old Mill” of 1898, both the influence of pointillism and his genius for color are evident in the extravagant dappled shadow of pinks, purples and grays on a stone wall. In “The Red Studio,” where this painting sits on the floor, the shadow is boiled down to a brushy purple shape.

Matisse’s penchant for bold color coalesces into big flat shapes like the dark blue and green on pink of the original version of “Young Sailor II” (1906). The palette of the magnificent “Le luxe (II)” (1907) is far more subtle, but reprised in “The Red Studio” its colors are electric. And its three pale nudes turn Venetian red.

This season New York has had more than its share of large, exhausting exhibitions, among them MoMA’s Cézanne and Joseph Yoakum shows and the Metropolitan Museum of Art’s Surrealism survey. Seeing them was a challenge from which I emerged feeling drained, retaining a blurred experience and wondering “Who is this for?” Specialists who are at least 5-foot-10 and run marathons? In contrast, “Matisse: The Red Studio” gives you many fewer artworks but allows deeper concentration. You come away feeling restored, like you have been given a gift.