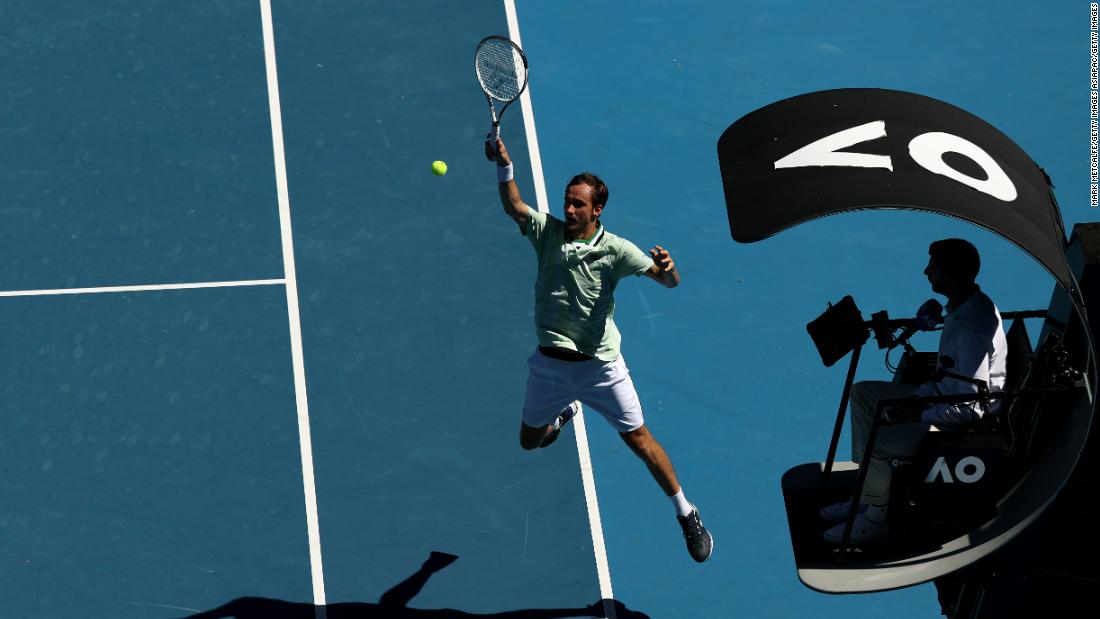 Russian Medvedev barked at French chair umpire Renaud Lichtenstein over the recently updated rule which limits players to a maximum of three minutes off the court, with an additional two if they opt for a change of clothes.

After closing out a tough 6-2 7-6(4) 6-7(4) 7-5 win over American Cressy on a sweltering day at Margaret Court Arena, the second seed said players needed more leeway to freshen up on days of extreme heat.

“The thing is that I know that in the 35 (degree) heat, when you’re playing in the sun, I’m going to want to change after two sets because you’re going to get wet,” he told reporters.

“I’m going to want to change my shorts, underneath my shorts, my socks, my shoes. You need like a good four minutes to do it, and my body wanted to pee after the first set.

“So I don’t see any logic in these rules, so hence I can call this stupid.”

After dropping the third set against serve-volleyer Cressy, Medvedev grew ill-tempered in the fourth as he failed to take the American’s serve through eight break points.

But he said he was already in a mood about being put on the Margaret Court Arena second showcourt for a second match in a row, rather than the Rod Laver Arena centre court.

“I was quite mad today because of a few things,” said the U.S. Open champion, the highest seed at Melbourne Park after world number one Novak Djokovic was deported from Australia.

“First of all is where I really don’t know, like, what should I do to play on centre courts in Grand Slams.

“Because I won the last Grand Slam. I mean, I’m the highest seed here, and to play against Maxime would be easier on Rod Laver (Arena), more space.

“When you play on a smaller court it’s tougher to play somebody who does serve and volley than on a bigger court.”

Medvedev, runner-up to Djokovic last year, will play Canada’s Felix Auger-Aliassime for a place in the semi-finals.