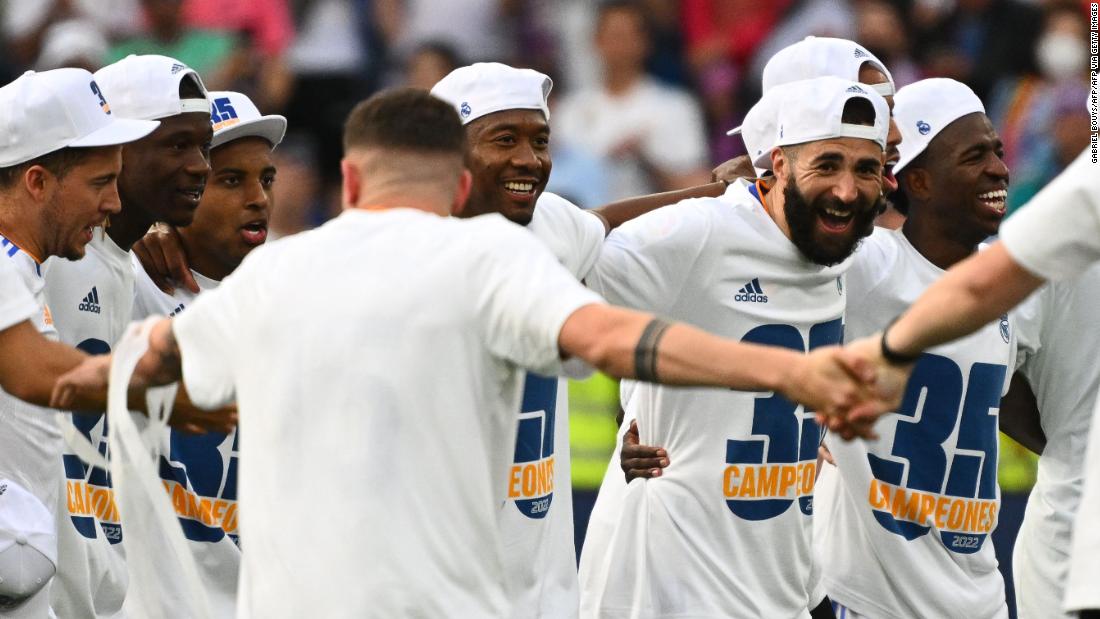 It is Real’s second league title in three years and one Carlo Ancelotti’s side has claimed with relative ease having moved an unassailable 18 points ahead of Barcelona — which has five games left to play this season.

Rodrygo scored twice in the first half before Marco Asensio and Karim Benzema added two more goals in the second half to complete a comfortable victory at the Estadio Santiago Bernabéu.

Real has now won 35 league titles — nine more than rival Barça — and it means Ancelotti has become the first manager to win the Premier League, the Bundesliga, Serie A, Ligue 1 and La Liga in his coaching career.

“Celebrating with the fans is the best thing there is, the party is theirs,” defender Marcelo, who is now the most decorated player in Real’s history with 24 trophies, told Spanish broadcaster Movistar.

“This is the biggest joy a player can have, celebrating with their fans, a match at home … there’s only joy.”

Real has been the dominant side in Spain this season — so far winning 25 league games and losing just three — with Benzema’s 42 goals in 42 games spearheading that success.

Real next faces Manchester City at the Bernabéu on Wednesday in the second leg of the sides’ Champions League semifinal.

The tie will be tightly contested after City won an entertaining first leg in Manchester 4-3.

“I’m proud [of the players]. I want to keep winning titles with Real Madrid,” Ancelotti told Real Madrid TV. “Congratulations [to the players and fans], we’ll see each other Wednesday. I’ll say this to the fans, Wednesday we need this atmosphere.”

Ahead of Saturday’s game, tennis star Rafael Nadal also took to the field to take the honorary kickoff.

Nadal, a 21-time grand slam champion, is a huge Real Madrid fan and has been an honorary member of the club since 2011.