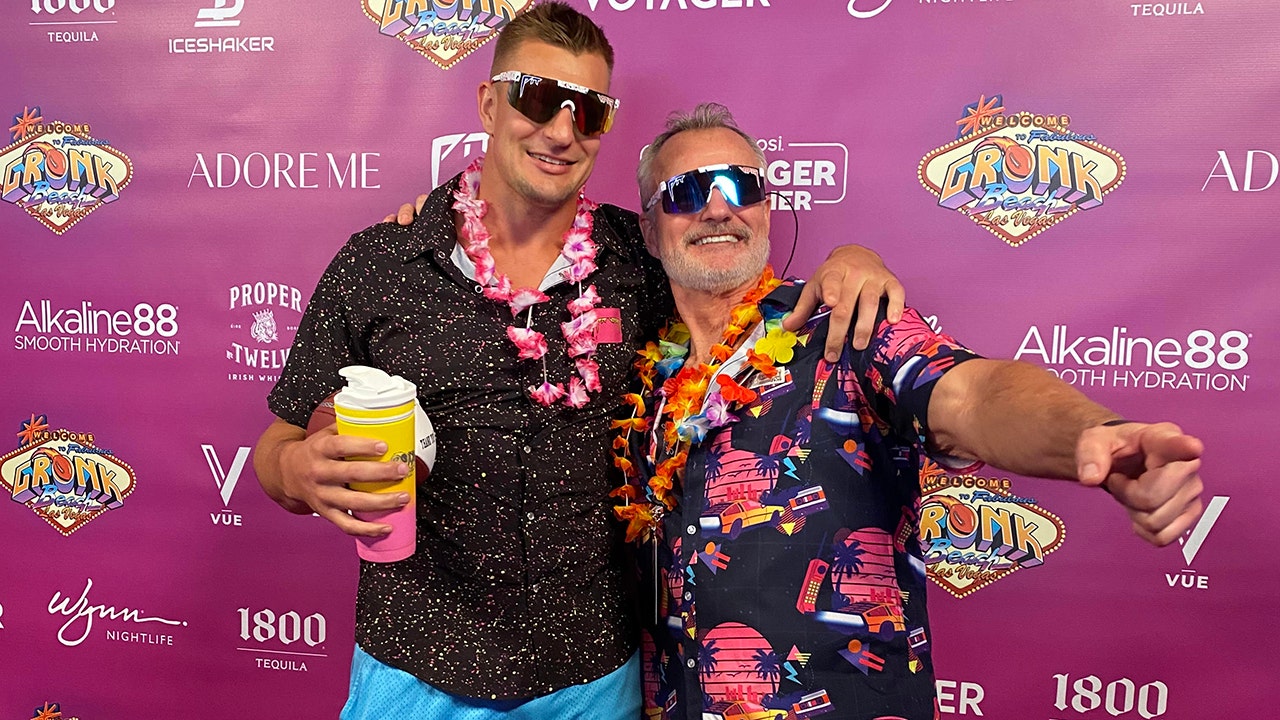 The superstar NFL tight end danced on stage while DJs spun hits, and fans packed the beach club to get a glimpse at the four-time Super Bowl champion and his famous family.

Amid the partying, Gronkowski led “USA” chants and signed gear for military veterans in attendance.

“Thank you for coming out and showing us some love here at the Encore Beach Club,” Gronkowski said before thanking the military.

With Pit Vipers covering his eyes, Gronkowski then launched autographed footballs into the cheering crowd.

It wouldn’t have been a party without the Gronkowski family in attendance.

Gordon Gronkowski, affectionately known as “Daddy Gronk,” wore a classic Hawaiian shirt with what appeared to be the image of a DeLorean. He also sported Pit Vipers over his eyes. He told Fox News Digital the Gronk Beach party is one of a kind.

The Gronkowski brothers do a chest bump on April 29, 2022, in Las Vegas.
(Fox News/Ryan Gaydos)

“If you’ve never been at it, you’re missing out. It’s really one hell of a time,” he said.

Chris Gronkowski was also in attendance for the party. He was wearing a Gronk Nation Youth Foundation tank top while holding an Ice Shaker cutout.

He told Fox News Digital the party was already off the chain before 1 p.m. local time.

GIANTS’ KAYVON THIBODEAUX ‘HUNGRY’ FOR START IN NEW YORK, TEAM GETTING ‘A GUY WHO WANTS TO WIN AT ANY MEANS’

“They haven’t seen something like this ever before. It’s gonna be crazy. The vibe is already popping,” he said. “I’m excited for this one.”

Chris Gronkowski said he hasn’t been to Vegas in a while but was thrilled to be back.

“You won’t see anything like this anywhere else,” he told Fox News Digital.

Rob Gronkowski’s future is still very much up in the air. He told TMZ Sports in a recent interview he still hasn’t decided whether he will return to play for the Tampa Bay Buccaneers.