HomeLife StyleAfter a Tempest, Philip Guston Shines in a Show True to His...
Life Style

After a Tempest, Philip Guston Shines in a Show True to His Spirit 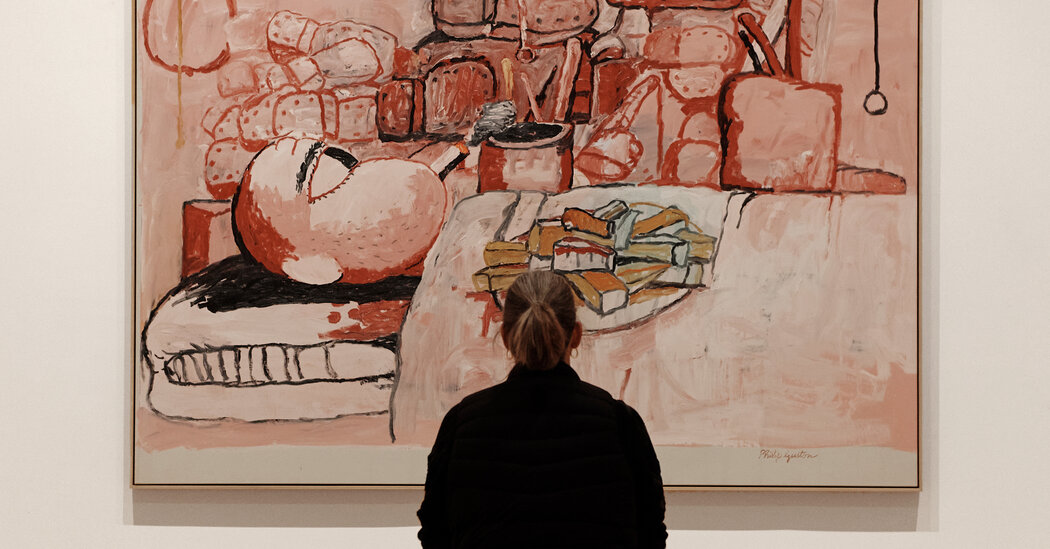 BOSTON — On Oct. 16, 1970, the American painter Philip Guston, who is the subject of a potent and controversial retrospective at the Museum of Fine Arts here, committed career suicide. Or so it seemed. In his late 50s, he was a star of the Abstract Expressionist movement, then still considered the mandarin market style. But that year, he filled a New York gallery not with his signature flickery, emberlike abstractions, but with paintings of goony, cartoonish figures wearing white Ku Klux Klan hoods. Instantly he plummeted from art world grace.

Guston had touched a nerve, though not what might have seemed the obvious one. The Klan images themselves weren’t the primary source of offense; his betrayal of “high” art was. At a point when the pre-eminence of abstraction was steadily being submerged under the plastic tide of Pop, Guston had joined the polluters.

As it has turned out, the work that got him canceled in 1970 ended up cementing his place in the art historical pantheon, where it continues to inspire generations of artists with its critique of racism, anti-Semitism and bigotry. And recently the same work — specifically the paintings of Klansmen — has been the source of another, different controversy, one that has brought anathema down on the art establishment itself.

In September 2020, four major museums, including the National Gallery of Art in Washington, D.C.; the Museum of Fine Arts, Boston; the Museum of Fine Arts, Houston; and the Tate Modern, London, announced that a jointly organized comprehensive survey called “Philip Guston Now” — its itinerary set, its catalog printed — was being postponed for four years. The reason: After the national turbulence generated by the police killing of George Floyd, the presentation of Guston’s work, and particularly its Klan imagery, required rethinking.

The National Gallery, its first stop, was careful to say that the decision to postpone in no way reflected lack of faith in the artist, but a concern about the reception of his work in a politically combustive time. But, for good historical reason, our big, conservative museums have little to no political credibility. Critics, artists and curators pounced, crying censorship and demanding the survey proceed as planned. Caught between fight or flight, the National Gallery reduced the delay to two years, and the itinerary was revised, making Boston the initial venue, where the show — now wrapped in the equivalent of caution tape — opens on Sunday.

Actually, it’s a logical starting place. M.F.A. Boston has become acutely alert to matters of audience inclusion and sensitivity since 2019, when a visiting group of Black middle school students claimed that they had been mistreated by staff, and the allegations became national news. An apology from the museum’s leadership followed, along with a promise to “make sure that everyone feels welcome here.”

For sure the museum has taken pains in its Guston installation to head off upset. A handout statement by a trauma specialist warns of disturbing content ahead. A detour out of and back into the galleries allows visitors to skirt potentially triggering material. Archival photographs of Nazi concentration camps and Ku Klux Klan meetings — of a sort openly displayed in many history museums — are here hidden away in slide-top vitrines. If such cautionary features represented the sum total of a promised “rethinking,” the postponement would be a bust.

But really significant change came with an increase in curatorial personnel. Once the delay was announced, the M.F.A. expanded the number of organizers for its version of the show, from one to four. The diverse team consists of Megan Bernard, the museum’s director of membership; Ethan Lasser, chair of the Arts of the Americas department; and two guests, Kate Nesin (the original curator, who has an essay in the catalog) and Terence Washington, an educator and writer.

Working with a total of 100 paintings and drawings — Boston’s will be the smallest edition of the show — they have downplayed the chronological sequencing favored by the catalog, though you can still piece together a narrative from timelines placed high on the wall in each gallery.

The artist was born Phillip Goldstein in 1913 in Montreal, Canada, where his parents had come as refugees fleeing anti-Jewish pogroms in Ukraine. He grew up in Los Angeles. There he picked up art early — Jackson Pollock was a high school friend — and aligned himself with leftist politics, an involvement that led to brushes with militant right-wing groups, including the Klan.

He began as a figurative painter in the 1930s and ’40s, influenced by Mexican muralism, Picasso, Italian Renaissance fresco painting and comic strips (“Krazy Kat,” “Mutt and Jeff” and much later R. Crumb’s countercultural Zap Comix). Constitutionally restless, he shopped through styles, and in the 1950s shifted to gestural abstraction, then the vanguard mode.

By then known as Philip Guston, he became a fixture in Abstract Expressionist circles in New York, living both in the city and upstate in Woodstock. In the late 1960s, with Nixon in the White House, Americans napalming Vietnam, and racial violence in the streets, he returned to figure painting, retaining his brushy Ab-Ex moves but applying them to a lexicon of images — Klan figures, detached bug-eyed heads, severed legs and piled-up shoes seen in Holocaust photographs — which he reused and combined until his death in 1980 at 66.

Repetition and combination are the rhythm of the show. It’s a tremendous, roiling rhythm and one that never resolves into predictability. The curators establish its persistence by mixing early and late work throughout the galleries, so you see themes repeating over 50 years, ambiguous in mood and content, like recurring dreams. The result is art that’s unpindownable. It can’t be slotted into one-track categories: tragic or comic, abstract or representational; radical or conservative.

The show’s opening gallery, emblazoned with the phrase “What Kind of Man Am I?” — a quote from Guston — makes the point with a display of what the curators interpret as self-images from across his life.

One, dated 1944 and actually titled “Self-Portrait,” is a realistic likeness, soulful almost to the point of being a sendup of romantic melancholy. In “Head I” (1965), a mask-like tangle of dark paint floats against a light ground, under which traces of another form — a triangular shape (a Klan hood?) — can be detected. And in “Untitled,” a small, square painting done the year Guston died, a gray battered stone with one staring eye contemplates the Sisyphean task of rolling itself up an incline.

Much of the rest of the show expands on the idea of locating Guston’s questioning, questing presence in his art. All strange stuff. If you wanted to make Guston look semi-normal — conventionally, classically Modern — you would foreground his 1950s abstractions and hang them together, a wall of gestural elegance. The Boston show does the opposite. It includes just a few abstract paintings and mixes them in with everything else, making them parts of a great wildness.

Wild is what Guston’s art is, pretty consistently. And it’s politically fractious and haunted over most of its arc, as the show suggests through the inclusion of archival material that might have inspired him — the 1940s concentration camp photos, the 1960s videos of antiwar and racial-justice protests. In each gallery, timelines intersperse events in the artist’s life with news of the larger world, then and now.

He made art that is rich in its worldly references, yet resistant to readability; art that is ethically charged, but also ethically unfixed. This helps explain why he remains a liberating example for many contemporary artists. (Several, including Glenn Ligon, Trenton Doyle Hancock, Dana Schutz and Art Spiegelman, contribute to the catalog.) It may also explain why, in 2020, the four museums that organized his retrospective felt that they needed more time to figure him out.

Was postponing the Guston retrospective wrong? I was OK with it, and unsurprised. Big old museums, the most change-aversive of institutions, are way behind the times and are being prodded hard to move forward these days. The pandemic picked their pockets; the racial justice movement, and their fumbling response to it, left them shamed and perplexed.

But they seem to be waking up to the fact that, to keep afloat in a demographically shifting world, they need to court new audiences and that the new audiences may be different from older ones. They may want to find their own stories in museums, along with corrected histories. They may encounter a Guston Klan painting and, before seeing “art,” see an emblem of racist hate made by a white man, which is, of course, what the Guston painting is, redeemed only by the fact that Guston knew it.

(The ingrained expectation of almost anyone coming to a traditional museum is, still, that any artist given a solo show will be white and male, unless advertised otherwise. My initial objection to the Guston show was that it’s yet another confirmation of that reality.)

So, given the nature of the institutions involved, and the learning curve climb some of them appear to have signed on for, I was fine with them putting in extra time on Guston. Judging by the results in Boston, the M.F.A. spent the time well. Sure, the therapeutic hand-holding business could go, but the exhibition itself is absorbing every step of the way. It brings Guston himself to life, thrashingly, ferociously so. And the art is great.

You see the 1969 picture called “The Studio,” in which a Klansmen paints his own portrait (Guston called the piece a self-portrait), or the monumental “Painting Smoking, Eating,” from 1973, with its Cyclopean figure (another self-portrait?) lying in bed, a plate of food on his chest, a cigarette stuck in his mouth, and the stack of shoes beside him, lifted from concentration camp photos, and you think “Fantastic!” Walking through the show you think it again and again, and that’s what art should make you do.