Five big takeaways from the NFL draft: A new premium position, QB values and the Ravens are really good 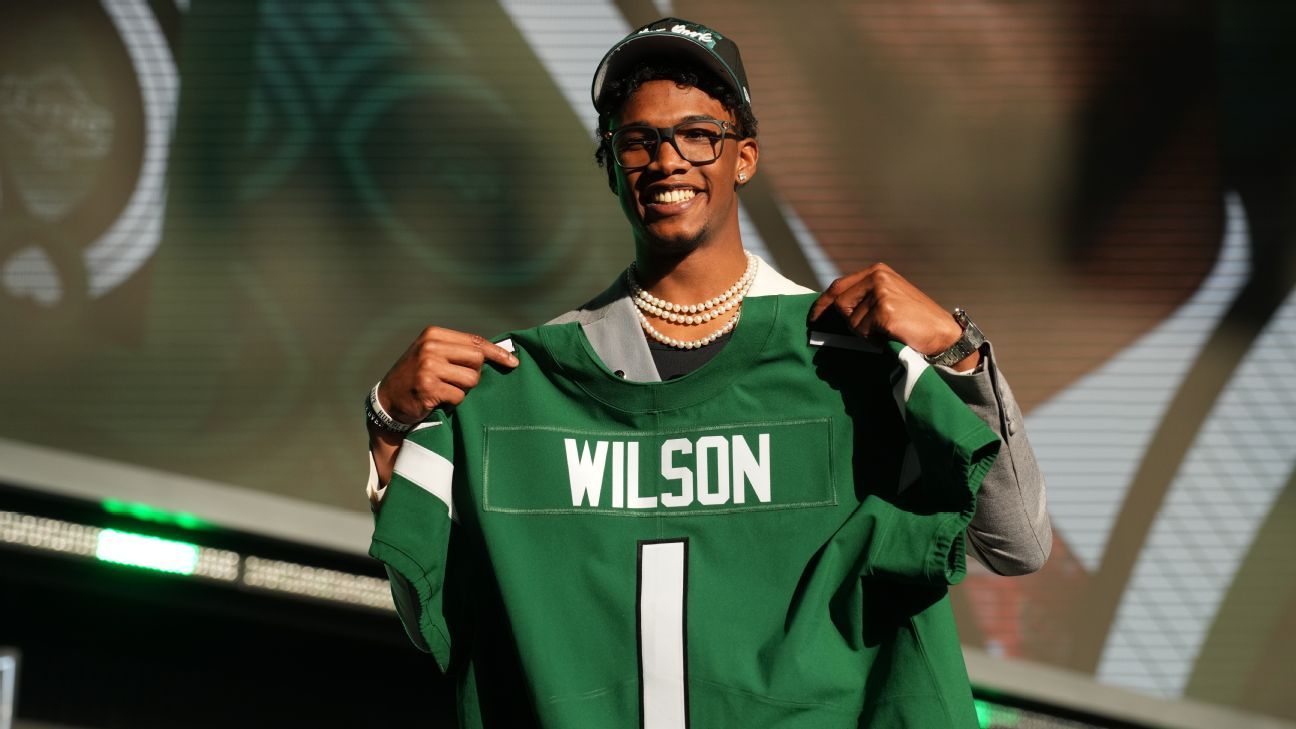 The biggest draft class in NFL history is officially in the books with 262 players joining the ranks of professional football players following the 2022 NFL draft.

What big takeaways are there from this draft? What lessons can be learned, studied and applied from the 2022 class?

This draft saw a record-number of trades involving first-round picks, a tie for the most wide receivers drafted in the first three rounds and a quarterback class that ultimately wasn’t valued by evaluators and decision-makers despite projections that teams would panic at the sport’s most important position.

Are these trends or one-off situations?

At least two trends that continue to hold true are the dominance of the SEC — notably Georgia and Alabama — in producing talent for the NFL draft, and the Baltimore Ravens‘ ability to own the draft board.

Here are the five big takeaways to consider as we pack up the 2022 draft and start to prepare for 2023.

For months, talk surrounding the NFL draft — both in league circles and on television — centered around the disparity between the quarterback grades in this class versus the expectation that teams would panic and reach for them much earlier in the draft than they were valued at.

But it never happened.

Instead of panicking and over-drafting this year’s quarterback class, NFL teams sought other avenues for acquiring new starters. Deshaun Watson, Russell Wilson and Carson Wentz were traded to new teams to become starters and Marcus Mariota was signed in free agency.

Another factor to consider: The 2021 NFL draft had five quarterbacks selected in the first round while the 2020 class had three. That’s eight teams — one-fourth of the league — currently tied to a young quarterback drafted within the last two years.

When it was all said and done, the 2022 class of quarterbacks largely went where projected outside of Liberty’s Malik Willis slipping to the Tennessee Titans in the third round.

As one NFL source told me, “None of these [quarterbacks] were seen as can’t-miss starters. And this league right now, you’re either a franchise quarterback or you aren’t, so why waste a pick on a guy you’re not convinced about?”

Wide receiver is a premium position

The general consensus among evaluators has long been that premium positions for roster building were quarterback, left tackle, pass-rusher and cornerback. Add wide receiver to that list.

Seventeen wide receivers were selected through Round 3 this weekend, which is tied with 1994 and 2007 for the most in the first three rounds in NFL draft history. Factor in marquee trades for Amari Cooper, Davante Adams, Tyreek Hill, A.J. Brown and Marquise Brown and no position has seen more movement this year than the receiver group.

There is talent coming out of the college ranks at the receiver position, and the players are pro-ready. Gone are the days of rookie receivers not impacting teams — just look at what Justin Jefferson and Ja’Marr Chase have done in back-to-back seasons. Instead, the growth of the passing game in college football and the exposure to more advanced passing concepts starting with 7-on-7 camps in youth football has caused an explosion of talent at wide receiver with 17 receivers being drafted in the first round in the last three years alone.

This trend is also tied to rising salaries as teams look to get younger and cheaper instead of paying a superstar upwards of $25 million per year. But it is also about the NFL being a copycat league. The Cincinnati Bengals went from “worst-to-first” in part thanks to the three wide receivers selected in the first two rounds — Chase (2021), Tee Higgins (2020) and Tyler Boyd (2016). That philosophy is now a proven winner, and teams are loading up on young receivers in an effort to rebuild what the Bengals have.

Who can replicate what the Bengals have done? Chris Olave teaming up with Michael Thomas on the New Orleans Saints is a great place to start. Jameson Williams joining Amon-Ra St. Brown once he returns from his ACL injury is another player primed to break out in Year 1.

Now they have to find their own Joe Burrow.

Check out Chris Olave’s best moments in college that make him a top prospect in the 2022 NFL draft.

Trading has never been so easy

A new record was set when 10 teams didn’t make a selection in the first round. The Miami Dolphins and Los Angeles Rams did not make their first selections until the end of Round 3. The 2022 draft taught us that trading among clubs has never been so easy.

Once considered an unwritten rule, the Minnesota Vikings traded twice within their own division — allowing the Detroit Lions and Green Bay Packers to move up and select wide receivers Jameson Williams and Christian Watson, respectively.

Why the change in trade philosophy? There are more general managers who came up through the front office ranks together and have close-knit relationships that allow for better communication to facilitate trades.

Another facet of the active trade market this year, is the fact that teams felt there were very few consensus top-tier players. The amount of parity among player grades this year also made general managers more aggressive in trying to move up boards to grab those few players considered elite.

In this draft alone, here are some of my favorite moves:

It probably won’t surprise you to learn that the SEC has the record for most draft picks made in Rounds 1-3 by a conference — that’s 40 picks in the 2020 draft. It came close again this year with 34 selections in the first three rounds, including a record seven defenders from Georgia’s defense alone in the 105 selections.

Georgia’s 15 total picks are the most by any school through seven rounds all-time, and is tied for the third-most for any school in draft history.

And we can’t forget about Alabama, which came in second place with six players selected in the first three rounds this year and now has 40 players drafted in the first two rounds since 2016, the most of any team.

A total of 65 SEC players were selected in 2022, which is tied with last year (SEC) for the most from one conference in a single draft.

As NFL teams prepare each summer to evaluate the upcoming 2023 class of draft prospects, the SEC is still the conference with the most potential.

Ozzie Newsome took over as the Ravens’ executive vice president of player personnel in 1996 as the team moved from Cleveland and became the Ravens. Newsome became the general manager in title in 2002, and had a run of drafts that makes him one of the best in league history.

When Newsome retired after the 2018 season and handed the reins to long-time lieutenant Eric DeCosta, no one knew if the long streak of excellent drafting in Baltimore would continue. Turns out, DeCosta learned well from his predecessor.

In the 2022 draft, the Ravens drafted three of my top 30 players and four in the top 40 overall. Each came at a position of need and represented an incredible value where they were selected.

Safety Kyle Hamilton (ranked No. 4 overall) was arguably the steal of the draft at pick No. 14. By trading Brown to the Cardinals, the Ravens picked up an extra first-rounder and used pick No. 25 overall to select center Tyler Linderbaum (No. 19) to anchor the offensive line.

But DeCosta and Co. were not done. In Round 2, the team stole Michigan pass-rusher David Ojabo (No. 28) and reunited him with former college coordinator Mike Macdonald, who is now running the defense in Baltimore. Ojabo, who tore his Achilles’ at the Michigan pro day, is likely to redshirt this season but was a projected top 15 pick before injury.

After being drafted by the Ravens, David Ojabo gets emotional while being consoled by family.

The Ravens sat tight and waited for UConn nose tackle Travis Jones (No. 37) to cement an A+ start to the class by drafting four players ranked inside the top 40 — and doing it without trading up in Round 2 or 3.

The award-winning class continued on Day 3 with Minnesota offensive tackle Daniel Faalele (No. 58) being selected at No. 110 overall — one of the best values in the entire draft — and filling an immediate need at right tackle. Even in Round 4, selecting a high-upside cornerback in Alabama’s Jalyn Armour-Davis was a steal.

In its first six selections, each player drafted by Baltimore was ranked as a top 100 player on my final rankings. That’s how you own a draft class.