Teen tennis sensation Coco Gauff is on a mission to inspire 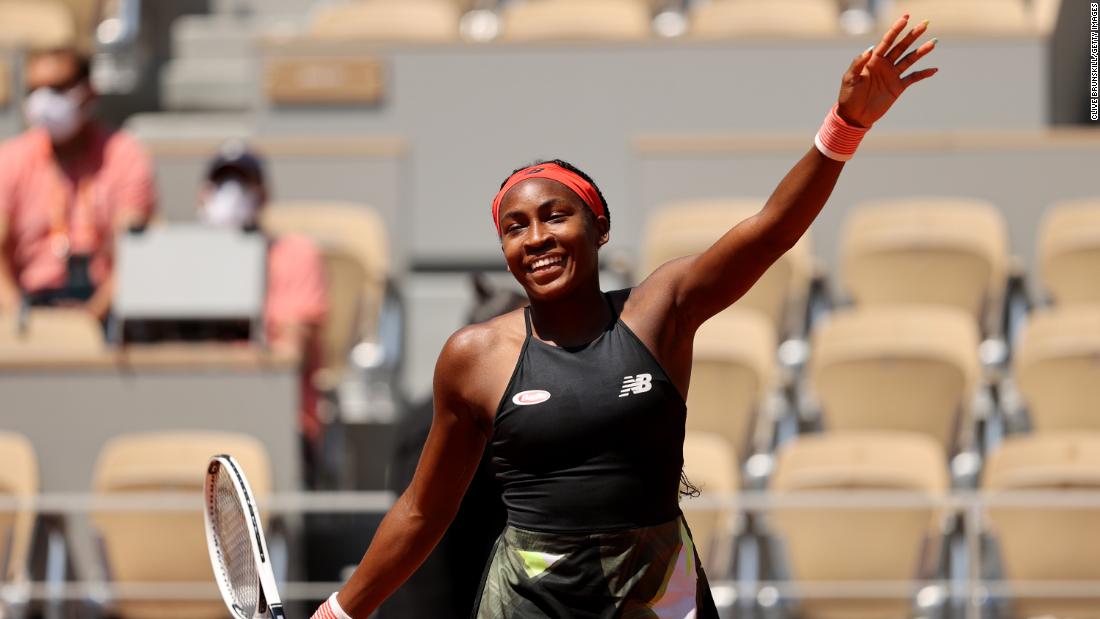 “I just remember walking out on the court blasting music with my head held down because I didn’t want to look at the crowd,” Gauff told CNN’s Becky Anderson in Dubai.

“It was such a long walk from the locker room. It was, like, 15 minutes,” she recalls. “Then they have all the walls of the champions, and obviously, I saw Venus there so many times. I was like, ‘Oh my gosh, she’s lifted this trophy so many times. And here I am like, about to go on against her.'”

What happened next was the stuff of fantasy, as the teenager swept her veteran rival aside in straight sets. Stone-faced, almost disbelieving, Gauff walked slowly towards a beaming Williams, who congratulated her warmly from across the net as the crowd erupted in wild applause.

“I’m inspired by both of them,” she says. “And I would say, I don’t know, I just think not only their games, but how they handled themselves off the court is something that I look up to.”

Gauff also acknowledges the importance of having two Black role models in a sport that has traditionally lacked diversity. “For me, there’s not much representation of people that look like me in this sport; so, for me as a young girl, just seeing them dominate and do it so elegantly, kind of just inspired me.”

Venus has also become something of a Coco Gauff fan, too. “I’ve gotten to have conversations with them, like Venus, I got to play doubles with [her]. That was just something I never thought of happening. And she’s always rooting for me.

“I remember her posting Instagram stories saying, people ask her questions like, ‘Who she’s rooting for?’ and she would say, ‘Serena,’ and then she will say, also me, and I thought that’s just really cool because I never thought that would happen.

“I mean, as a kid, I never thought I’d play either of them, let alone play doubles with one of them!”

Although she will only turn 18 in March, Gauff is already treading her own path as a role model for others. She spoke out during the protests following the murder of George Floyd and believes in using her position to inspire change.

“For me, I just feel like it’s not so much of responsibility, I feel like that’s just me, and that’s like my identity,” she told Anderson.

“I want to stand up for people who look like me and feel like they don’t have a voice. And I’m lucky enough that some people in the world care about what I have to say. So I try to make sure that I say it and say in a correct way, or in a way that people understand.”

She says she is mindful of setting an example to her two younger brothers. “I would say I just kind of try to hold myself to what I want my brothers to be, [and be] a role model for my brothers.”

‘Your mindset can change everything in your life’

The Atlanta-born star also draws her own inspiration from closer to home. Her grandmother survived cancer, and Gauff says watching that battle, and the positive mindset with which her grandmother approached it, was a learning experience.

“I think your mind kind of controls everything. Your mind controls, you know, how your body feels and how your mood is,” she explains.

“One of the things I learned growing up, my grandmother she had lung cancer when I was younger, and now she’s cancer free, but I just remember her never being too negative about it, and her always being positive.”

That attitude made a lasting impression on the youngster and her views on mental health. “I remembered my grandmother telling me that the only reason she thinks she conquered it — because she had stage four and the chances weren’t looking good — was that she would just wake up every day so mentally in a positive and happy light.

“You know, as a kid, I didn’t really understand what was going on. But I remember just never seeing her sad or upset or saying, ‘Why me?’ Instead, she was saying, like, ‘Why not me?’ So I think for me, now at this age, that showed me that your mindset can change everything in your life. So, if you’re not good mentally, you know, it could be as painful.”

A new pressure that young sports stars are born into now is the spotlight of social media, and Gauff says that she has learned to avoid spending too much time online.

“I’m really rarely on Twitter or Instagram. I’m just there to like my friends’ posts and comment and then log off again,” she says. “I would say TikTok is the only one that I’m on the most, just because I don’t see much tennis, I don’t see much about me on the app, which I like.”

Resisting the temptation to try and please everyone on social media is important, Gauff believes. “I feel like a lot of people have a lot of nice things to say, I would say definitely the positive outweighs the bad. But I guess, you know, I feel like as a human you kind of want to look at what people are saying to you and saying about you.

“As humans, we have it in our heads to please everyone, so you want to know what bad things people think about you so you can fix it. But some things are just, you just can’t fix it. And so I just kind of stay off it.”

It is a single-minded philosophy that seems to extend to other areas of her life, too. Gauff is a firm believer in following your own path for your own reasons.

“If you’re not doing it for yourself, then don’t waste your time doing it,” she says. “Because you have to remember this is going to be your life and you don’t want to spend the only life that you have being miserable.”

Making every moment count is a part of that, she says. “I think every day counts, whether it’s something little that you do every day, it’s a chance to improve. The sun goes up and down every day and you want to make sure you make the most of the time that matters in between.”