Demand for housing is outpacing supply across the globe. However, Pakistan has a particularly acute problem with this. Pakistan’s position as the world’s seventh most populous country has been confirmed by the most recent Housing and Population Census, which was conducted in 2017.

The country’s overall population is increasing at a rate of 2.4 per cent, while the growth of the urban population is even greater at 2.7 per cent. During the period between 2030 and 2040, more than half of Pakistanis will live in urban areas. As a result of the rapid increase in the world’s population, a housing shortage of close to 10 million units is now estimated. Urban housing shortages affect 62 per cent of the population, the majority of whom are from lower-income backgrounds, and are estimated to be as high as 3.5 to 4 million units each year. With ever growing issue and complexities behind the property, it is the structural reasoning that explains why Pakistanis do not have options of mortgaging or leasing the property.

Data from zameen.pk shows that between 2013 and 2018, the price of a home in Pakistan increased by 134 per cent. During the same time period, urban plot prices increased by 151 per cent. Pakistan’s per-capita GDP, on the other hand, has barely increased by 20 per cent between 2012 and 2018. House prices in Pakistan are much higher than in both developed and comparable economies, making this problem even more acute.

Though after all the numbers and forecasting, country is not moving toward other alternative options rather than buying the property. And the reason behind it is simple. Pakistan’s mortgage‐finance‐to‐GDP ratio is one of the lowest in South Asia; I-e 0.25 per cent. Pakistan’s cultural and religious setting is not conducive to credit financing. Islamic sharia compliant house financing products have a great opportunity in this space to enable home ownership and financial freedom for the masses but still they haven’t come up to fill up the open space. Secondly, Pakistan has perpetually been in a near stagflation situation with a 14 per cent year on year growth of money supply (M2) being a major contributor to rising commodity prices. Government deficit spending takes away most of the credit availability leaving very little for private sector and mortgage based products.

A controlled inflation with low interest rates and a favorable policy can trigger this growth in the coming few years. Another issue pertaining is the lagging behind of non-banking financial companies (NBFC). People are left with only option left of taking mortgage or lease under bank. It has a structural issue behind it. 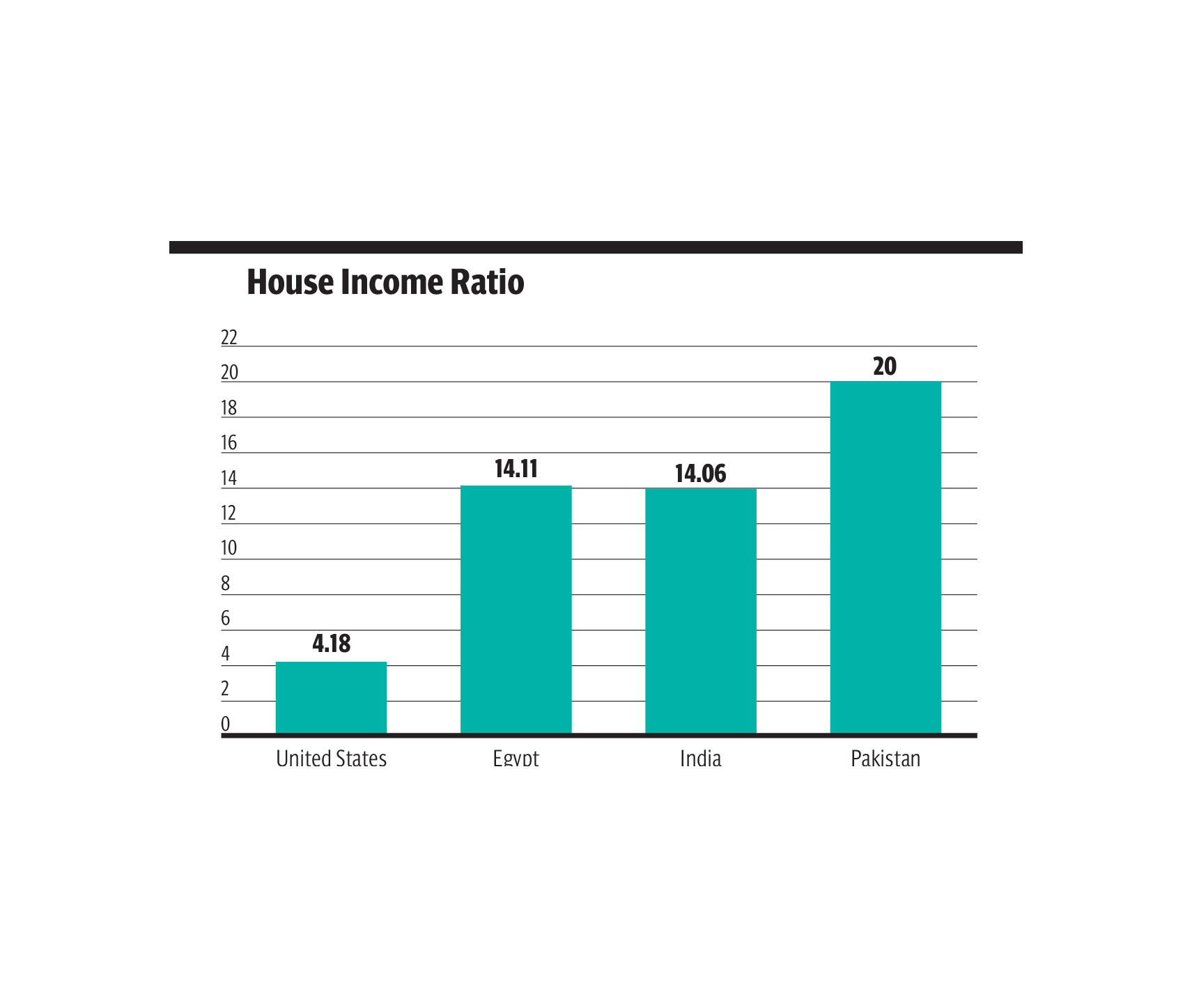 There is a handsome amount of cash flow and cash in the pocket. But the flow is informal. A lot of cash is floating in the real estate property files. Pakistan’s structural setup of financing or cash flow have enough amount of liquidity but there is a steep vacuum in adequate formal liquidity. If this happens, it can help push the problem of rising real estate pricing in the country which are getting out of hands of middle class households. Access to low interest finance fuels the growth and innovate for modern economies and drastically change the economic condition of its people in no time. In times of quantitative easing regimes this is a quick hack to a private sector led growth.

The smooth expansion of the real estate sector is dependent on the availability of adequate liquidity. A large portion of this investment comes from households, which account for three-quarters of all real estate investment. There has, however, been a decline in household investment due to rising property values and high interest rates. In the meantime, the flow of equity capital has also dried up since the economic recession of 2009. Thus, institutional lending has grown tremendously. 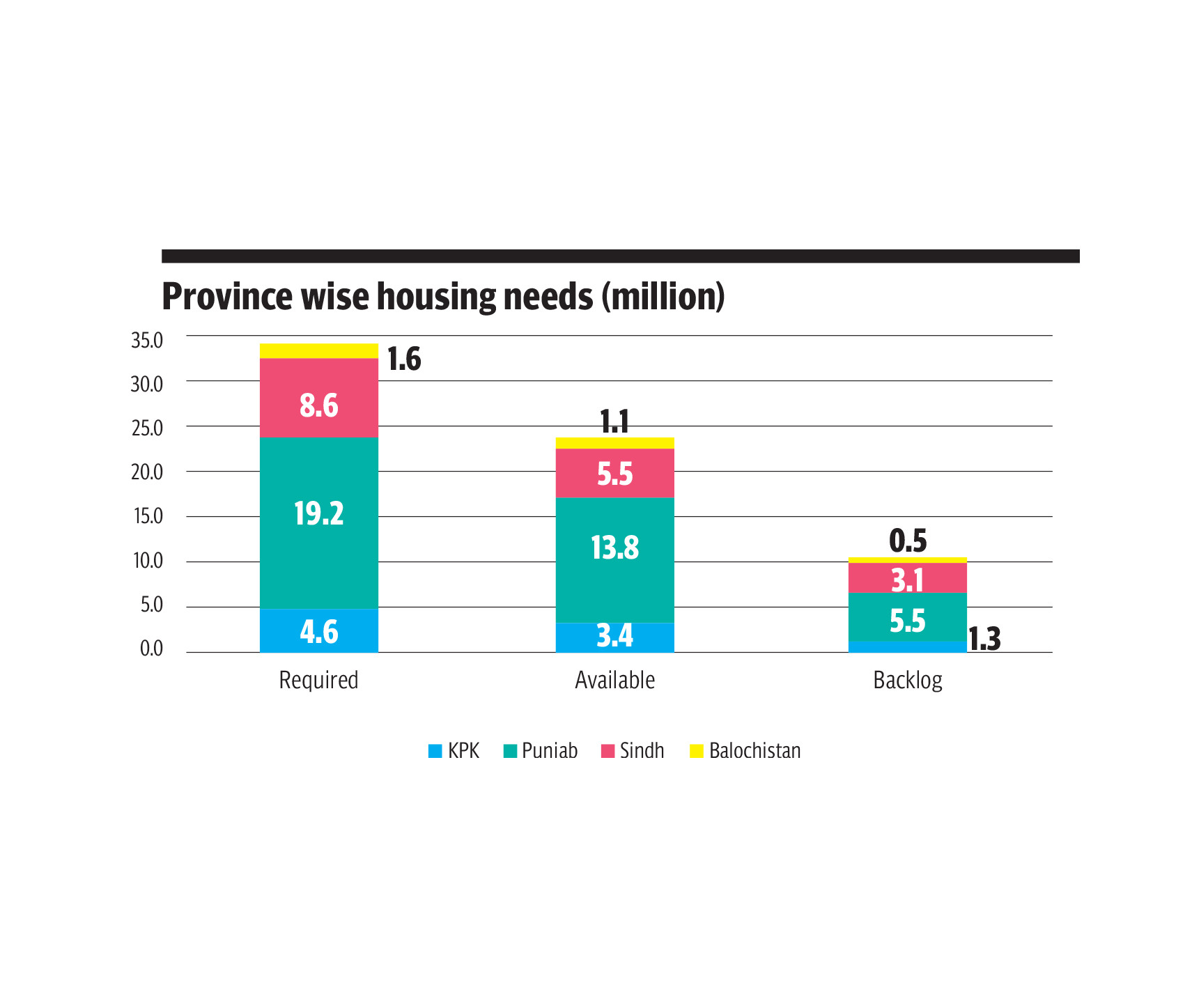 For Pakistan’s economic development, NBFIs and Modarabas are critical. A total of 5.2 million small and medium businesses are estimated to exist in Pakistan (SMEs). Their share in Gdp is guesstimated to be 40 per cent, while their impact to export markets is anticipated to be 25 per cent. Pakistan’s addressable audience for SME financing is between PKR3-4trn, with formal finance meeting only 15 per cent to 20 per cent of the industry, leaving the remainder to be funded via indirect channels or unfilled.

“Developmental project financing is required to fuel the development in early years and enable people to buy their homes at mortgage,” said Jawad Nayyar, co-founder and chief vision officer at DAO PropTech. “Controlled escrow mechanism and support for modern use case based projects with high social and environmental impact will fuel an unprecedented growth in this sector.” 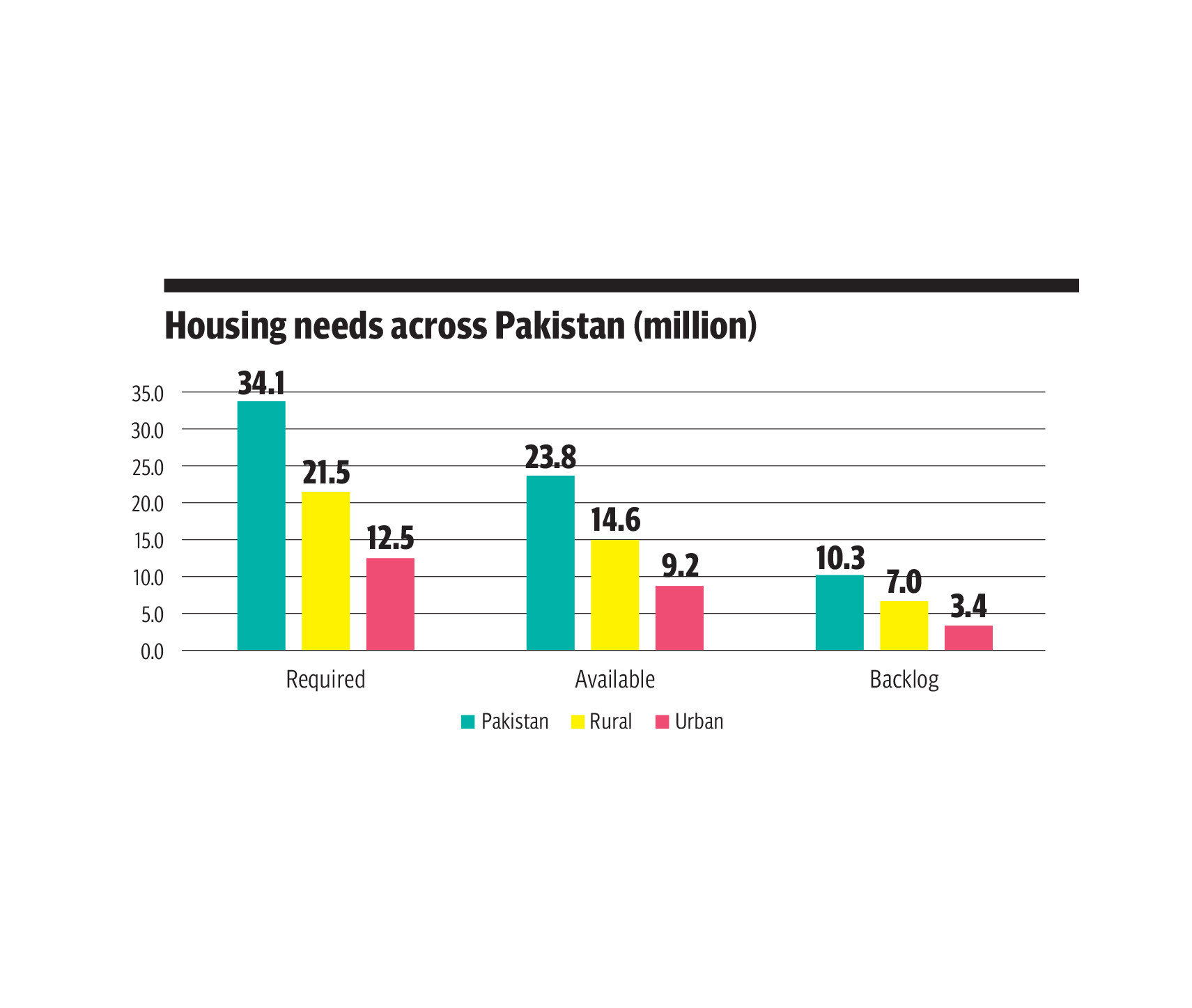 Abnormal real estate pricing and continuous growth in the price of land, and inflated interest on housing loans are two of the main reasons of unaffordable housing in Pakistan. In contrast, there is no other player in the sector. NBFIs are increasingly involved in providing real-economy credit facilities as well as managing household and organizational savings. The non-bank finance sector in Pakistan is constituted of both customary and Shariah-compliant quasi financial institutions, such as Modarabas, Collective Investment schemes, Retirement Funds, Real estate investment trusts, Leasing Companies, and Asset Financial Assistance.

Due to asset-quality pressure and higher capital requirements, banks have been unable to lend. Rural and semi-urban retail customers, who are underserved by banks, have better access to financial services because of the NBFCs’ improved distribution channels. Non-banking financial companies (NBFC) are one of the success stories in India with 23 per cent of real estate market share in fiscal year 2019; one of the highest share of system credit.

To launch a mega-development project, more than 12 regulatory licenses are required, which exclude financial licenses. NBFCs also have their own tedious reporting lines which adds another layer of must-haves, approvals etc. And people tend to stay away. On the flip side of this untidy regulatory framework lies the land of opportunities. According to PIDE, in order to get regulatory approval of a real estate development project, approximately 4 years of sludge has to be dealt with. The opportunity cost and the operational cost of all these bureaucratic requirements make most of the projects redundant and impossible to operate.

“NBFCs face a lack of funding,” said Ammar Habib Khan, chief risk officer for Karandaaz. “Our secondary market isn’t deep enough, making it difficult for NBFCs to raise debt that can then be used to lend out mortgages. There is a problem with asset-liability mismatch in every non-bank financial institution. While mortgages have a longer-term maturity, the liabilities they can raise have a shorter-term maturity.” 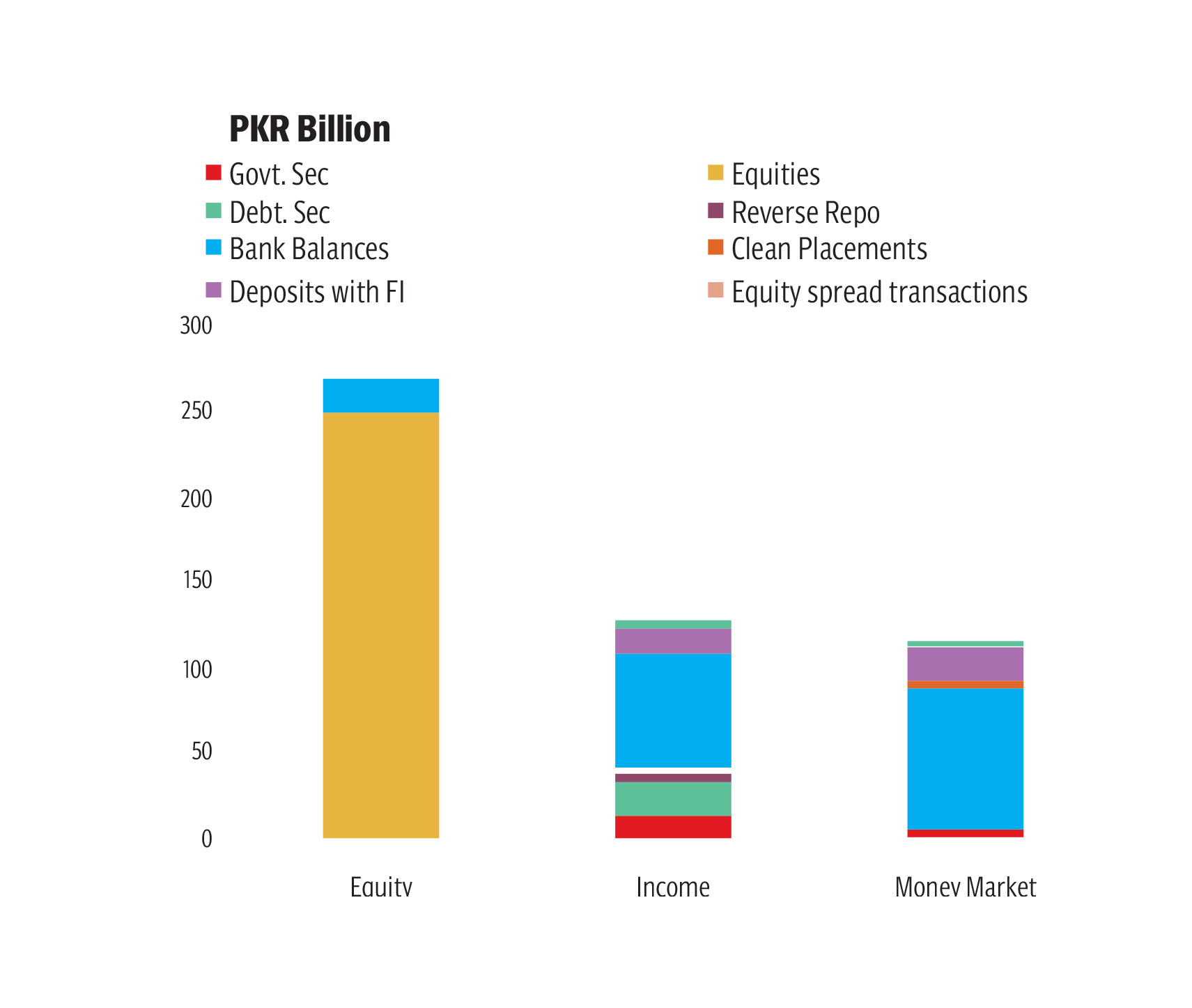 Equity and money market funds have made it possible for investors to make quick changes in their holdings based on shifting market dynamics, expectations, and appetite for risk on the fly. Despite the volatility of equity returns, this adaptability has allowed the industry to keep its AUMs in check. In light of its historical performance, the Modarabas & NBFIs industry’s prognosis remains constant. Despite the fact that the industry has plenty of time to expand, the progression is still slow. Since CY18, The total assets of the industry have grown only at a single-digit rate of 6 per cent, which is fat slow and less then neighboring India where NBFIs have taken the front seat and banks are now considered as a secondary option for mortgage, lease or financing. A rickshaw driver can go and get a mortgage or lease on a property in India, whereas good luck to a rickshaw driver on opening a bank account without formal taxable income.

It has proven to be the most secure on the domestic market. When there is no risky corporate debt, the primary interest rate-based investment avenues are risk-free government paper or deposits and placements with financial institutions. Under the rules of the Securities and Exchange Commission of Pakistan (SECP), there are provisions in place to protect against liquidity/maturity risks. As a result, investors have restricted themselves to shorter-term instruments in order to avoid reprising losses caused by anticipated changes in interest rates; which currently stands at 9.75 per cent and is at the brisk of going into double figures. And the Overnight Reverse Repo (Ceiling) Rate stands at 10.75 per cent per annum. It is because of asset liability mismatch. Long term investments require liabilities which have maturities of more than one year. 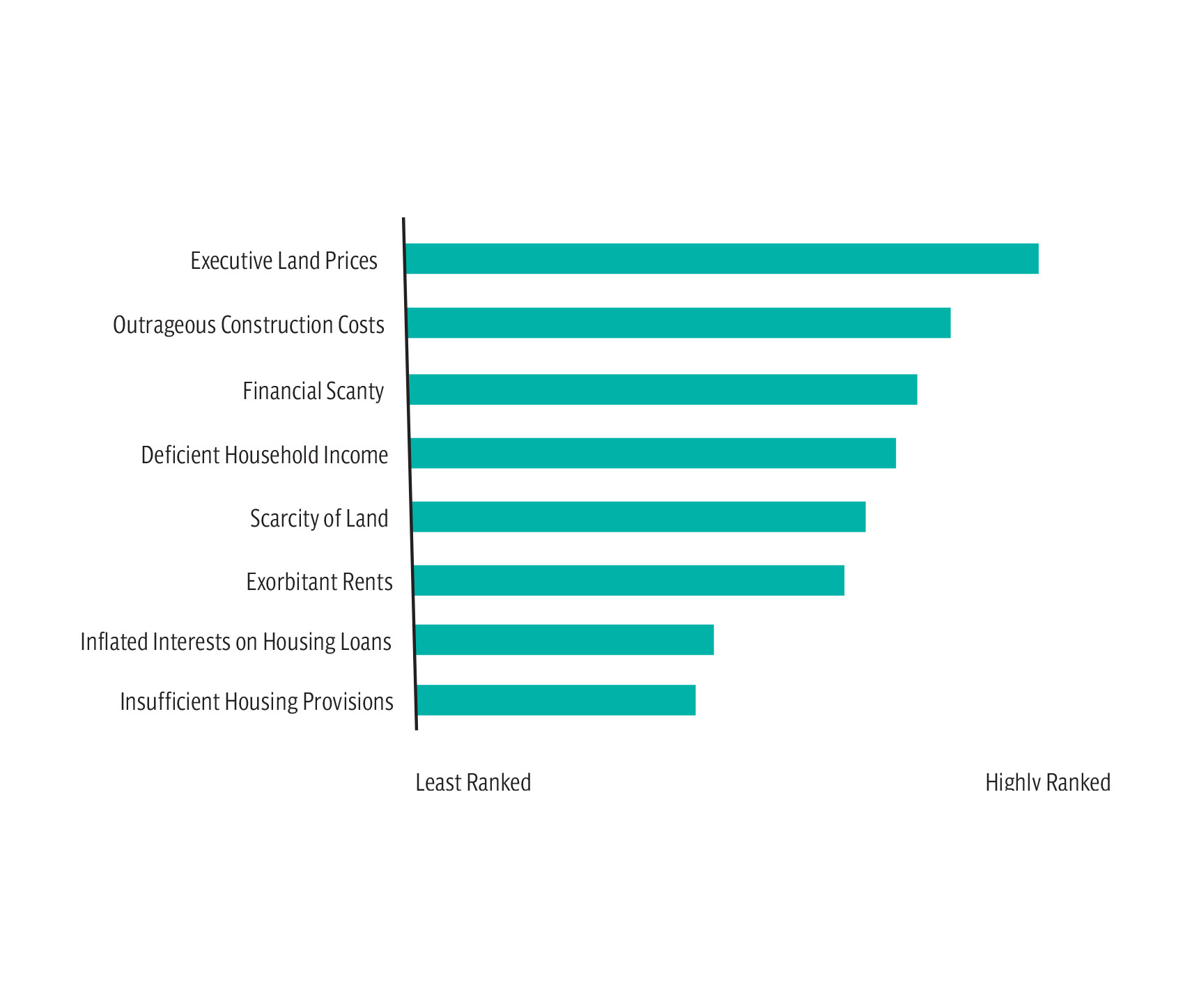 Unaffordable housing has been found to affect the population that spends more than 30 per cent of household income on housing costs. As a further example, a study found that more than 64 per cent of households spend all of their income on household expenses. Land prices must be reduced in order to address the issue of prohibitively expensive housing, which cannot be solved by simply proposing low-income plots (3 to 5 Marla’s) in housing projects. In order to make housing more accessible to the poor, the supply should be adjusted to the demand in terms of price, location, and quality to take population belonging to informal and unbanked sector in the mortgage or leasing sector.

In terms of home construction and improvement, the most critical issue is whether or not credit is available and under what terms. The question of whether a katchi abadi resident can get a house improvement loan or a house building loan based on the collateral of his or her informally developed home has been debated extensively. There’s a dire need to take this sector into account by inclusion of NBFCs via an easy mortgage and leasing structure. It’s a moonshot but doable.