You Hear the Musical Saw. These Mathematicians Heard Geometry. 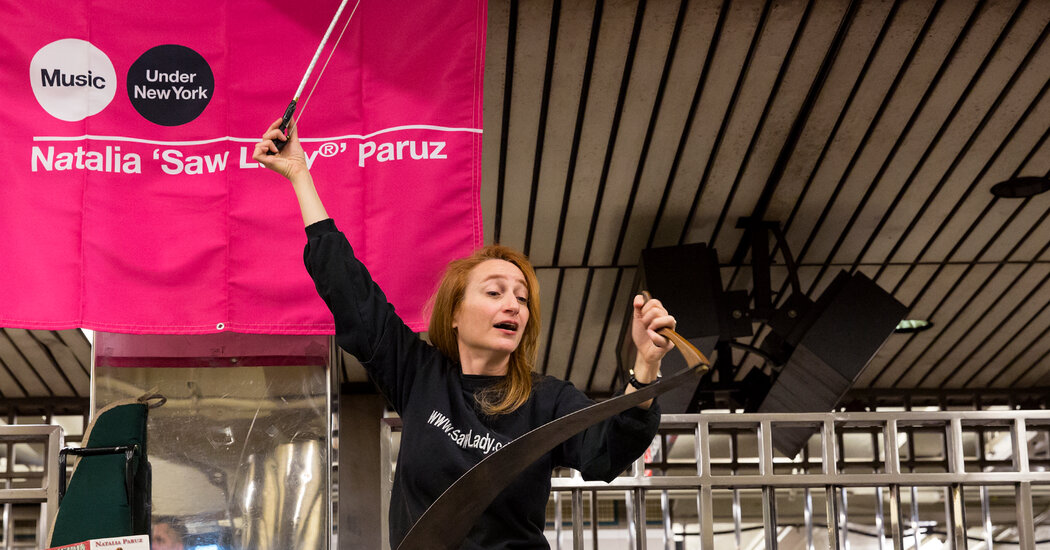 Early in the 19th century, an unknown musician somewhere in the Appalachian Mountains discovered that a steel handsaw, a tool previously used only for cutting wood, could also be used to produce full and sustained musical notes. The idea had undoubtedly occurred to many a musically-inclined carpenter at other times in other places.

The key is that the saw must be bent in a shallow S-shape. Leaving it flat, or bending it in a J- or U-shape, will not do. And to resonate, it must be bowed at exactly the right sweet spot along the length of the saw. Bowed at any other point, the instrument reverts to being a useful, but unmusical, hand tool.

The seated musician grips the handle of the saw between her legs, and holds the tip with either her fingers or a device called an end clamp, or “saw cheat.” She bends the saw into a shallow S-shape, and then draws the bow across the sweet spot at a 90-degree angle with the blade. The saw is then bent, changing the shape of the S to lower or raise the pitch, but always maintaining the S-shape, and always bowed at the moving sweet spot of the curve. The longer the saw, the greater the range of notes it can produce.

Studying musical saws may seem an odd choice for a Harvard professor of mathematics, but Dr. Mahadevan’s interests are broad. He has published scientific papers explaining falling playing cards, tightrope walking, coiling rope, and how wet paper curls, among other phenomena that may appear at first glance unlikely subjects for mathematical analysis. In such a list, the musical saw seems no more than a logical next step.

To understand the musical saw, imagine an S lying on its side, a line drawn through its center, positive above the line and negative below it. At the center of the S, he explained, the curvature switches its sign from negative to positive.

“A simple change from a J- to an S-shape dramatically transforms the acoustic properties of the saw,” Dr. Mahadevan said, “and we can prove mathematically, show computationally, and finally hear experientially that the vibrations that produce the sound are localized to a zone where the curvature is almost zero.”

That single location of sign-changing, he said, gives the saw a robust ability to sustain a note. The tone slightly resembles that of a violin and other bowed instruments, and some have compared it to the voice of a soprano singing without words.

Dr. Mahadevan acknowledges that while he set out to understand the musical saw in mathematical terms, “Musicians have of course known this experientially for a long time, and scientists are only now beginning to understand why the saw can sing.”

But he thinks research into the musical saw may also help scientists better understand other very thin devices.

“The saw is a thin sheet,” he said, “and its thickness is very small compared to its other dimensions. The same phenomena can arise in a multitude of different systems, and might help design very high quality oscillators on small scales, and even perhaps with atomically thin materials such as sheets of graphene.” That could even be useful in perfecting devices that use oscillators, such as computers, watches, radios and metal detectors.

For Natalia Paruz, a professional sawist who has played with orchestras worldwide, the mathematical details may be less significant than the quality of her saws. She began by playing her landlady’s saw when it wasn’t being used for other purposes. But now she uses saws specifically designed and manufactured to be used as musical instruments.

There are several American companies that make them, and there are manufacturers in Sweden, England, France and Germany. Ms. Paruz said that while any flexible saw can be used to produce music, a thicker saw produces a “meatier, deeper, prettier” sound.

But that pure tone, whatever its mathematical explanation, comes at a cost. “A thick blade,” she said, “is harder to bend.”