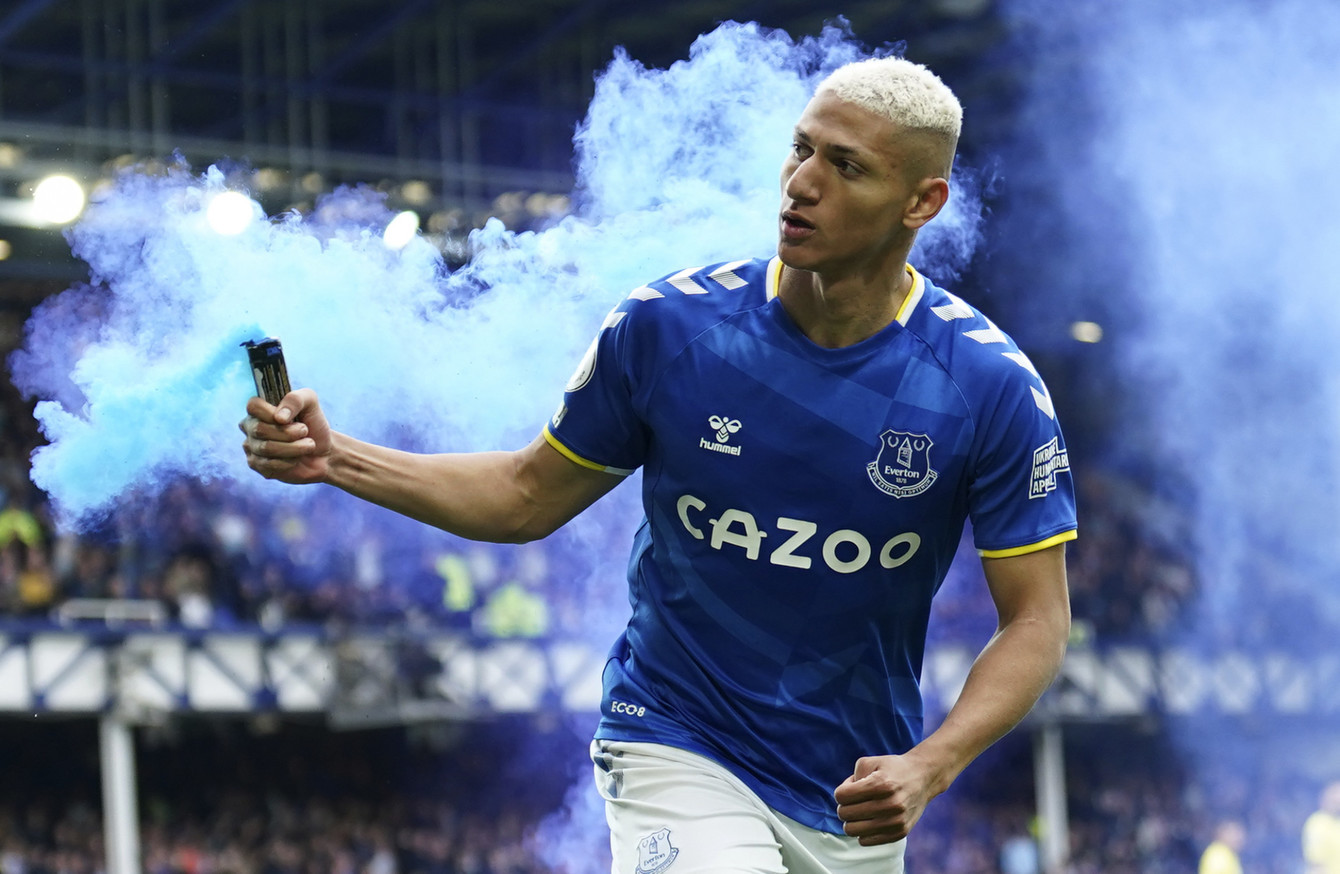 
Everton kept alive their hopes of Premier League survival by shocking Chelsea 1-0 on Sunday, as Arsenal maintained their two-point lead over Tottenham in the battle to qualify for next season’s Champions League.

Arsenal were 2-1 winners at West Ham to move back above Spurs, who earlier beat Leicester 3-1 thanks to a Son Heung-min double.

Everton’s huge win at a raucous Goodison Park means Frank Lampard‘s side are just two points from safety and have a game in hand to come over Leeds and Burnley.

The only goal arrived just a minute into the second half when Richarlison pressured Cesar Azpilicueta into losing possession and the Brazilian forward finished coolly from Demarai Gray’s pass.

Mason Mount’s shot hit both posts as Chelsea sought a response before man-of-the-match Jordan Pickford sprinted across his line to keep out Azpilicueta’s follow-up effort.

The England goalkeeper also denied Antonio Rudiger at point-blank range and kept out Matteo Kovacic in a nervy seven minutes of stoppage time.

Former Chelsea boss Lampard, who took over from the unpopular Rafael Benitez at the end of January, has struggled to revive the fortunes of the Merseyside giants, who last played outside the top flight in the 1953/54 season.

But he was delighted with the passion shown by his players and the supporters.

“The fans are in the middle of this,” he told Sky Sports. “I am pleased the players could see on the way in what it means to the fans.

“They know that and understand it. They got behind us, were nicely aggressive – this place has to be a hard place to come.”

Defeat leaves third-placed Chelsea still with work to do to seal their place in the Champions League next season.

The Blues’ lead over Tottenham is down to five points, but Thomas Tuchel‘s men have a comfortable run-in on paper.

Arsenal’s centre-backs got the job done to keep the Gunners on course to end a five-year absence from the Champions League.

Rob Holding’s header from Bukayo Saka’s corner put the visitors in front at the London Stadium.

West Ham had one eye on the second leg of their Europa League semi-final against Eintracht Frankfurt in midweek, but David Moyes named a strong side and was rewarded with an equaliser before half-time from Jarrod Bowen.

The Hammers’ strength from set-pieces has been one of the successes of their season.

But they were undone at the back from another corner as this time Gabriel Magalhaes turned in Gabriel Martinelli’s cross.

Tottenham took full advantage of Leicester naming a much-changed side ahead of their Europa Conference League second leg against Roma.

Harry Kane powered home a header from Son’s corner midway through the first half and Son doubled the lead on the hour mark after a pass from substitute Dejan Kulusevski.

Son scored a third in the 79th minute to kill the game, curling an unstoppable effort into the top corner for his 19th Premier League goal of the season before a late consolation for Kelechi Iheanacho.

“No-one could have imagined when I arrived in November we could be in this race still, but these players are deserving to fight for such an important place,” Conte told the BBC.

“It is not easy to qualify for the Champions League in England.”

The battle for fourth could come down to a north London derby between Tottenham and Arsenal on May 12.

But Mikel Arteta’s men will hope to extend their lead to five points next weekend when they host relegation-threatened Leeds, while Spurs face a daunting trip to title-chasing Liverpool.

Share
Facebook
Twitter
Pinterest
WhatsApp
Previous articleHealth astrology for May 2022: Taurus, Cancer, Leo should be careful about their health this month; check what this month holds for other signs | The Times of India
Next articleBest beauty looks from Bombay Times Fashion Week