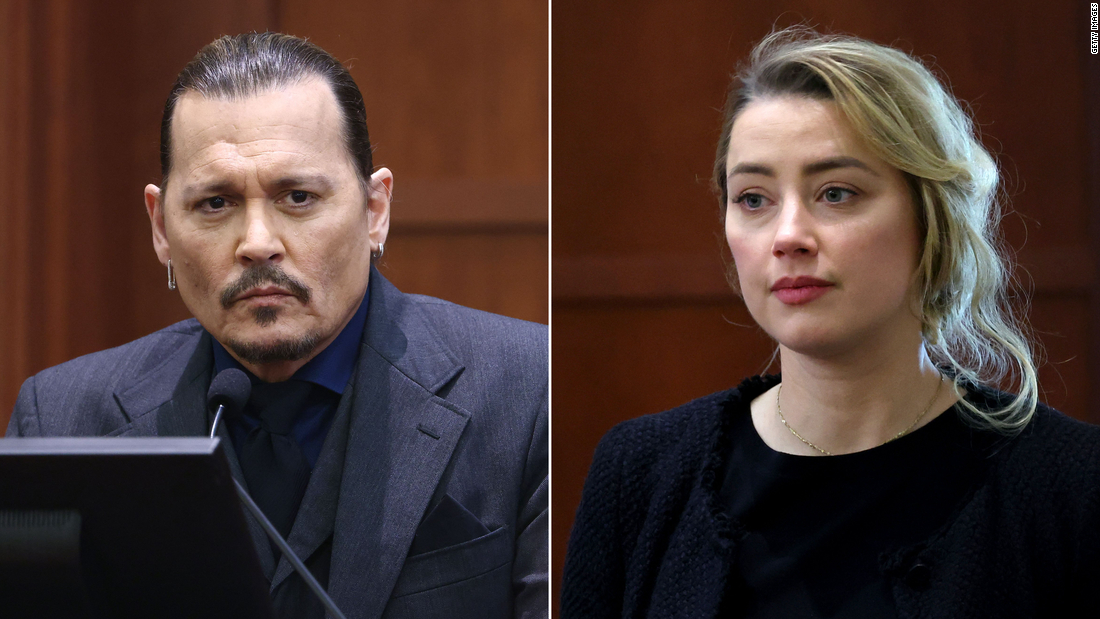 Depp is suing Heard, his ex-wife, for $50 million over a 2018 op-ed she wrote for The Washington Post in which she described herself as a “public figure representing domestic abuse.” Though Depp was not named in the article, he claims it cost him lucrative acting roles.

Heard and Depp, who met in 2009 and were married from 2015-2016, accuse the other of acts of physical violence during their relationship. They have both denied the other’s claims.

The trial, which started on April 11, is expected to last six weeks. Heard has not yet testified.

The actress has parted ways with Precision Strategies, the public relations firm that had been hired to handle media inquiries surrounding the trial, multiple sources familiar with the matter said Sunday.

CNN has reached out to a representative of Precision Strategies for comment.

Shane Communications, the firm newly hired by Heard to manage communications surrounding the trial, had no comment when contacted by CNN.

Ahead of Monday’s return to court, here’s a look at some of what took place last week in the trial.

Depp concluded his fourth and final day of testimony in the trial on Monday. Jessica Meyers, Depp’s attorney, played a 2016 recording of a conversation between the former couple in which Heard expressed concern about regaining her reputation after press reports about abuse in their relationship.

“What did you say in response when Ms. Heard said, ‘Tell the world, Johnny. Tell them, Johnny Depp, I, Johnny Depp, a man, I’m a victim, too, of domestic violence’?” Meyers asked Depp.

Throughout the week, the former “Pirates of the Caribbean” star was seen doodling during breaks.

Depp was seen drawing with pink and purple markers at one point. During another moment, he drew a sketch on a Post-it note and shared it with his attorney.

On Wednesday, Alejandro Romero, who worked as a doorman at Depp and Heard’s former apartment building, gave recorded testimony from inside his car in which he was seen vaping and driving at one point.

In a taped deposition played for the court, Depp’s former agent, Christian Carino, testified that he believes accusations of domestic violence made by Heard against Depp cost the actor future “Pirates of the Caribbean” films.

“My opinion is that Amber’s accusations would have had the most dramatic impact on his off-screen reputation. I’m not talking about any one specific accusation,” Carino said.

Carino began representing Depp in October 2016, and at one point represented Depp and Heard at the same time.

An attorney for Heard pressed Carino on other issues Depp may have had while working on previous “Pirates” films.

“I’m aware of him being tardy but he’s been tardy on everything his entire life,” Carino said. “I think it’s troublesome to everybody, but everyone has learned how to produce a film to deal with it.”

Terence Dougherty, general counsel for the ACLU, testified in a recorded deposition played Thursday about the close involvement of the ACLU in drafting and placing the op-ed written by Heard that is at the center of the Depp’s case.

Dougherty said that ACLU staff members wrote an initial draft of the piece for Heard, focused on bringing awareness to gender-based violence. Heard is an ambassador for the organization.

Dougherty said he recalled numerous emails back and forth with ACLU personnel and attorneys for Heard.

“They were suggesting edits to the op-ed relating to matters covered in the NDA (a non-disclosure agreement from Heard and Depp’s divorce),” Dougherty said.

ACLU staffers worked to place the op-ed in consultation with Heard’s team, Dougherty said, and Heard wanted the piece to come out just after “Aquaman” was released, a strategy the ACLU agreed with.

“From the ACLU’s perspective, Amber is about to receive an incredible amount of press and be in the public eye, so what better a time would it be than now to put out this op-ed so that it generates significant readership about our issues,” Dougherty said.

Dougherty also testified about donations received by or on behalf of Heard, after she’d publicly promised to donate the entirety of her $7 million divorce settlement from Depp to charities including the ACLU.

To date, Dougherty testified they have received $1.3 million from Heard or on her behalf. Payments stopped after 2019.

Dougherty said he has no indication that Heard does not intend to pay the rest of her pledged donation.