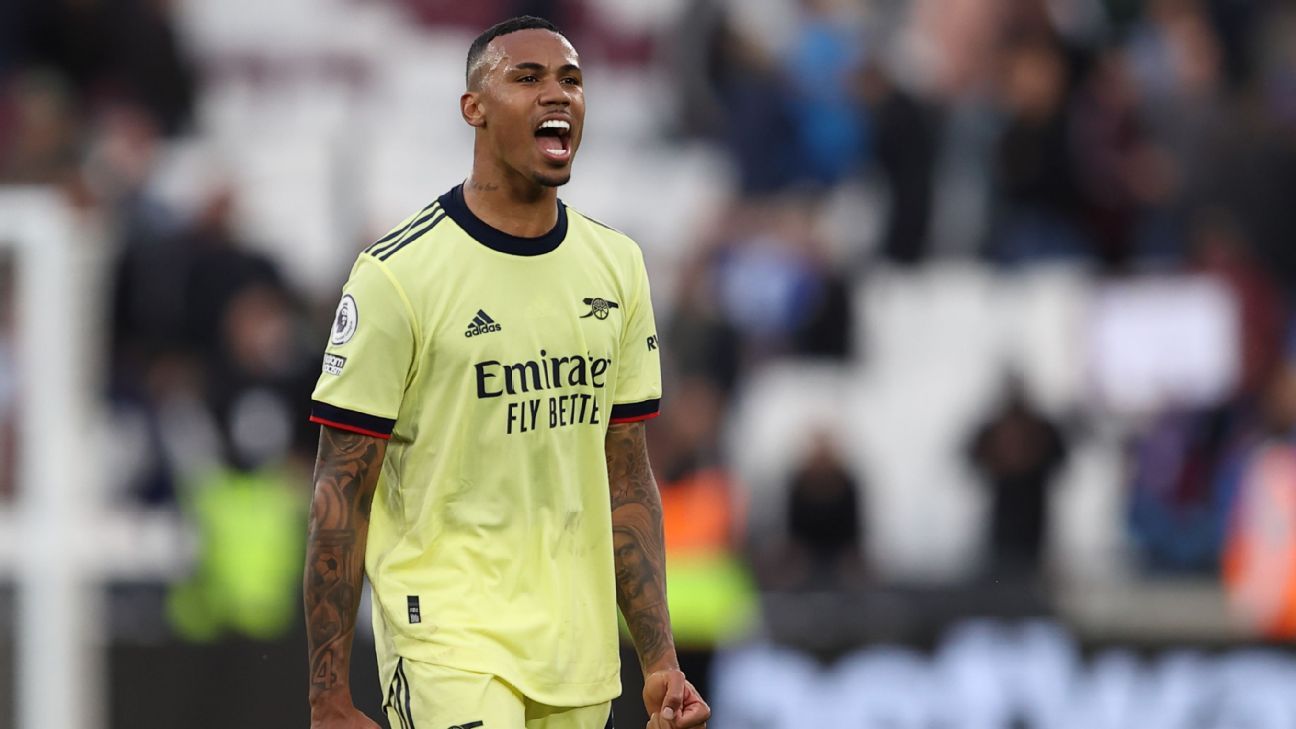 Juventus are lining up a summer move for Arsenal defender Gabriel Magalhaes, according to Italian journalist Gianluca di Marzio.

Gabriel was the match winner in the Gunners’ vital 2-1 win away at West Ham United on Sunday, and Di Marzio believes Juve could try and sweeten the deal by including 25-year-old midfielder Arthur Melo in exchange.

Juventus are desperate for a top centre-back ahead of the new season with Giorgio Chiellini deciding whether to leave the club after 17 seasons, and Gabriel is the player they’ve identified to fill his boots.

The 24-year-old has been a consistent performer for Arteta this season and on Sunday he played his 33rd game of the season.

Juve feel the former Lille man has all the necessary qualities to slot straight into boss Maximiliano Allegri’s system, and they’re keen to get a deal over the line to fend off interest from Barcelona, among others.

Gabriel is believed to be happy in North London, but Juve feel a swap deal could persuade Arsenal to part with the Brazilian.

– Tottenham Hotspur winger Steven Bergwijn is actively looking “for a solution” to his lack of game time under Antonio Conte, reveals the Athletic. The 24-year-old former PSV Eindhoven attacking player has struggled to establish himself in the side under a succession of managers, and current boss Conte has handed him just one start since his arrival as manager. Ajax attempted to sign Bergwijn in January, but their bid was rejected. Now, it looks as though crunch talks are looming between club and player as he looks to play more matches.

– Manchester United and Arsenal are monitoring 22-year-old midfielder Aurelien Tchouameni, according to the Sun. One of the hottest prospects in European football, the Frenchman is seen by United officials as a more realistic alternative to West Ham United midfielder Declan Rice. Tchouameni has impressed for AS Monaco and France this season, and the midfielder would certainly be an upgrade to United’s midfield. However, such has been his sparkling form that United face competition from Arsenal and Liverpool for his signature.

– New Manchester United boss Erik ten Haag will walk into a battle with Manchester City manager Pep Guardiola as he looks to improve United’s midfield, with the Dutchman keen to beat his Spanish counterpart to the signing of James Ward-Prowse from Southampton. That’s according to the Sun, who believe Ten Haag has made the England international one of his top targets. Saints skipper Ward-Prowse, 27, could command a fee of £75m, but Ten Haag sees him as a vital part of the rebuilding job he faces at Old Trafford.

– Barcelona are exploring a number of targets at left-back, with Chelsea‘s Marcos Alonso emerging as their latest option, according to Sport. Barca are looking to strengthen in several areas ahead of the 2022-23 season, with a new left-back high on the list. Current incumbent Jordi Alba isn’t getting any younger, and 33-year-old Alonso joins a list of targets that include Celta Vigo‘s Javi Galan, Benfica‘s Alejandro Grimaldo and Valencia‘s Jose Gaya. Alonso is contracted to Chelsea until 2023 but could be a bargain at €15m.

– Barcelona director Mateu Alemany dampered links between the club and Bayern Munich striker Robert Lewandowski. Speaking to Movistar after Barcelona’s 2-1 win over Mallorca on Sunday, Alemany said: “There was no meeting with Lewandowski’s agent. Also, I don’t like to speak about the negotiations process — it’s something private.”