A Sister and Brother Choose Repertoire by Feeling and Listening 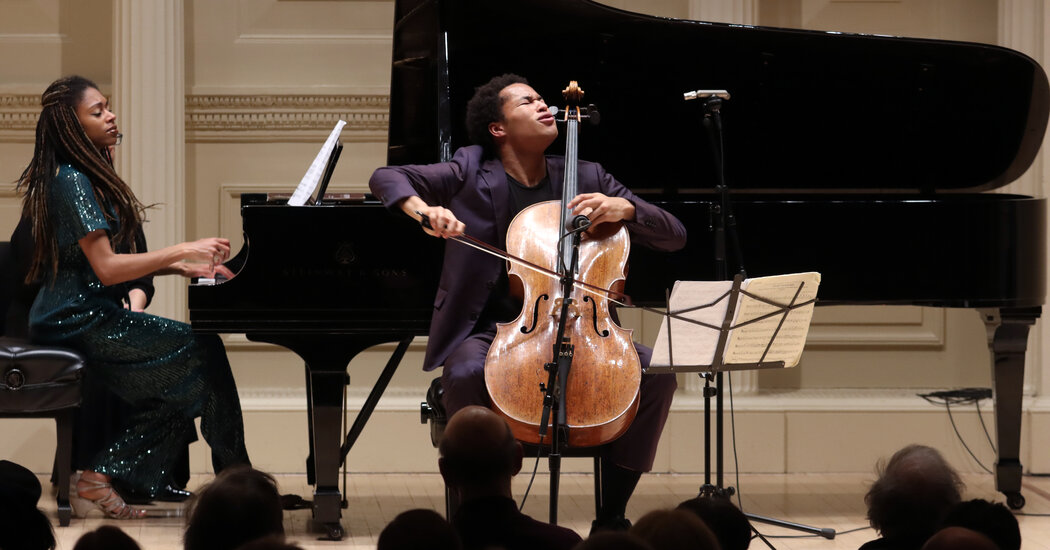 Are Sheku and Isata Kanneh-Mason those rarest of things: young superstars who might actually live up to their hype?

It certainly appears that way. The pair are two of seven British brothers and sisters, all musicians, who shot to fame when Sheku, a cellist, won the BBC Young Musician Award in 2016. Sheku’s exposure, in particular, has been extravagant since his star turn in the wedding of the Duke and Duchess of Sussex in 2018. But listen to more than the breathless reporting of their streaming numbers and you find musicians who, while still in the early stages of their careers, already have serious, distinctive things to say.

Sheku, 23, made his New York Philharmonic debut in November, playing Dvorak’s Cello Concerto, a performance that revealed him to be a “charismatic protagonist and a generous collaborator,” as Joshua Barone put it in The New York Times. Isata, 25 and a pianist, has recorded two outstanding solo albums, one filled with works by Clara Schumann, the other cleverly moving between composers including Samuel Barber, Amy Beach, George Gershwin and Samuel Coleridge-Taylor.

After an acclaimed appearance together at Weill Recital Hall in December 2019, they are returning for a duo recital at Carnegie Hall on Wednesday, part of a long, busy tour that continues in Boston and Atlanta before a European leg.

Speaking from Kansas City, Mo., they talked about their program of cello sonatas by Frank Bridge, Britten, Shostakovich and either Khachaturian or Beethoven, depending on the stop. Here are edited excerpts from the conversation.

You each have your own concerns as artists, so how do you go about compiling a program when you play together on a tour like this?

SHEKU The main criteria is music that we’ve heard or want to discover, that we enjoy and maybe have something to say with, and we want to spend time working on and perform many, many times. Also it’s always interesting to pick repertoire that perhaps is new to some of the audiences we perform for. The Bridge Sonata is an example: It’s music that I really love and think is special, and has been new to a lot of audiences.

ISATA Sometimes when we present pieces that aren’t so well known, you have to go through the difficulty of getting presenters to accept them and trust that the audiences will like them. We’ve found on this tour that the audiences like these pieces; they really respond to the music. That just shows that all good music can be communicated, whether it’s something popular or not.

Sheku, what appeals to you about Frank Bridge’s sonata, which is a rarity compared even to the Britten and Shostakovich?

SHEKU It’s an incredibly beautiful and at times heartbreaking piece of music. The sonata was split in terms of when it was composed, the first movement from before World War I and the second from toward the end of the war. Bridge was certainly affected by what happened, you can hear that. The first movement ends quite peacefully, and then the second starts in a completely different world. It’s like a lament, with some dark, harsh moments as well. It ends with the first movement’s theme, and when it does it’s quite like the Elgar Cello Concerto, it’s nostalgic, almost desperate. Although it ends on a nice major chord, it doesn’t feel resolved. It’s a really fascinating piece.

Did you intend the works to speak to each other, to draw connections?

And the Beethoven is there because some presenters think he is easier to promote than Khachaturian?

SHEKU It’s great music as well, I get it.

ISATA It is great music, and we were playing it before anyway. But yeah, it was originally because it’s more accessible than the Khachaturian.

Are these works that you have lived with for a long time?

ISATA The Bridge and the Britten we first played about a year ago. The Shostakovich we played a couple of movements of during childhood — actually we played the whole thing when we were about 18. We put it away for a few years and then came back to it.

The Shostakovich was written in 1934, after the premiere of “Lady Macbeth of Mtsensk” but before his political denunciation in 1936. How would you describe the sonata?

SHEKU He wrote it during a period of separation from his wife, but I don’t think the piece is about that necessarily. It has quite Classical elements in terms of the form of the whole sonata, the style of each movement, how the phrases are constructed, but harmonically, rhythmically and the colors he chooses to use are very distinctive of Shostakovich. The third movement is where he pours all of his heart and sorrow and soul. The outer movements are quite playful and quirky. He had a good sense of humor.

Do you have a favorite page in the score?

ISATA I actually could pick one! It would be in the fourth movement, about six pages before the end. The music dies down, there’s this moment of silence — and then the piano explodes with these semiquavers, with an E flat minor chord in the left hand. It’s just so Shostakovich to have such a dramatic mood change. When I was younger this passage always terrified me, because I was like, Oh, I’m going to mess up the semiquavers, but now, after many years of practicing, I’m usually just excited to shock the audience with this outburst.

You’ve both shown an interest in expanding the diversity of the music your audiences hear, whether Clara Schumann or music rooted in spirituals, but that’s not been the case with your Carnegie dates together. Is there scope for doing more of that in your chamber music programs, or is it harder in some areas than in others?

ISATA There is great repertoire in the chamber music world of female composers, of Black composers, but that will come to us naturally, the way any piece of music does — through listening and through feeling compelled to play them, rather than ticking boxes.

SHEKU What is potentially a shame is that a lot of the pressure to perform repertoire by female composers is placed on women, and a lot of the pressure to perform music by Black composers is placed on Black musicians. You don’t often see a white performer performing music by Samuel Coleridge-Taylor, for example. So us just being Black performers is, I don’t know, enough of a difference.