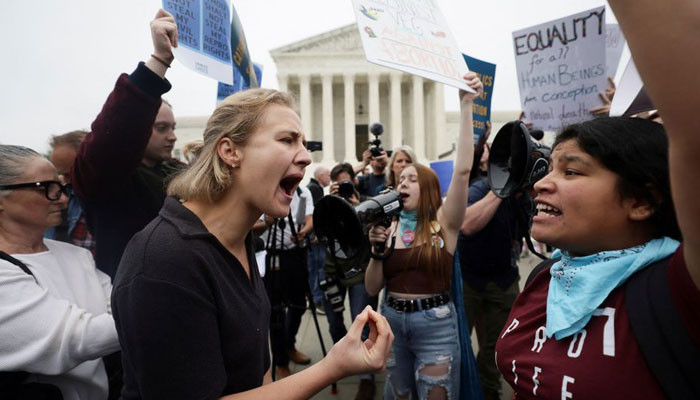 WASHINGTON: President Joe Biden on Tuesday criticised as “radical” a draft US Supreme Court decision that would overturn the landmark 1973 Roe v. Wade decision that legalised abortion nationwide, a bombshell that was denounced by Democrats and stunned even some moderate Republicans.

The court confirmed that the text, published late on Monday by the news outlet Politico, was authentic but said it did not represent the final decision of the justices, which is due by the end of June. Democrats scrambled to plan a response to the news that a half-century of abortion access for American women could come to an end.

“It’s a fundamental shift in American jurisprudence,” Biden said, arguing that such a ruling would call into question other rights including same-sex marriage, which the court recognised in 2015.

“It becomes the law, and if what is written is what remains, it goes far beyond the concern of whether or not there is the right to choose,” Biden added, referring to abortion rights. “It goes to other basic rights — the right to marriage, the right to determine a whole range of things.”

The Roe decision recognised that the right to personal privacy under the US Constitution protects a woman’s ability to terminate her pregnancy.

Biden urged voters to elect US lawmakers who support abortion rights so Congress can pass national legislation codifying the Roe decision. Democratic-backed legislation to protect abortion access nationally failed in Congress this year as the razor-thin majority held by Biden’s party was insufficient to overcome Senate rules requiring a supermajority to move forward on most legislation. Democrats tend to support abortion rights. Republicans tend to oppose them.

Chief Justice John Roberts said he has launched an investigation into how the draft — authored by conservative Justice Samuel Alito — was leaked, calling it a “betrayal.”

“This was a singular and egregious breach of that trust that is an affront to the court and the community of public servants who work here,” Roberts said.

Following the disclosure, Democrats at the state and federal level and abortion rights activists searched for ways to head off the sweeping social change long sought by Republicans and religious conservatives.

US Senator Lisa Murkowski, a moderate Republican who has been supportive of abortion rights, also voiced dismay.

“If it goes in the direction that this leaked copy has indicated, I would just tell you that it rocks my confidence in the court right now,” Murkowski said, adding that she supports legislation codifying abortion rights.

Democratic California Governor Gavin Newsom said the most populous US state will pursue an amendment to its constitution to “enshrine the right to choose.”

“Do something, Democrats,” abortion rights protesters chanted as they rallied outside the court against the decision, which would be a triumph for Republicans who spent decades building the court’s current 6-3 conservative majority.

Senate Republican Leader Mitch McConnell condemned the leak as a “lawless action” that should be “investigated and punished as fully as possible.” McConnell said the Justice Department must pursue criminal charges if applicable.

In the absence of federal action, states have passed a raft of abortion-related laws. Republican-led states have moved swiftly, with new restrictions passed this year in at least six states. At least three Democratic-led states this year have passed measures to protect abortion rights.

Abortion has been one of the most divisive issues in US politics for decades. A 2021 Pew Research Center poll found that 59% of US adults believed it should be legal in all or most cases, while 39% thought it should be illegal in most or all cases.

The anti-abortion group Susan B Anthony List welcomed the news.

“If Roe is indeed overturned, our job will be to build consensus for the strongest protections possible for unborn children and women in every legislature,” said its president, Marjorie Dannenfelser.

Abortion provider Planned Parenthood said it was horrified by the draft ruling but stressed that clinics remain open for now.

“While we have seen the writing on the wall for decades, it is no less devastating,” said Alexis McGill Johnson, the group’s president, in a statement.

The case at issue involves a Republican-backed Mississippi ban on abortion starting at 15 weeks of pregnancy, a law blocked by lower courts.

“Roe was egregiously wrong from the start,” Alito wrote in the draft opinion.

Roe allowed abortions to be performed before a fetus would be viable outside the womb, between 24 and 28 weeks of pregnancy. Based on Alito’s opinion, the court would find that Roe was wrongly decided because the Constitution makes no specific mention of abortion rights.

“Abortion presents a profound moral question. The Constitution does not prohibit the citizens of each state from regulating or prohibiting abortion,” Alito wrote.

The abortion ruling would be the court’s biggest since former President Donald Trump succeeded in naming three conservative justices to the court — Neil Gorsuch, Brett Kavanaugh and Amy Coney Barrett.

Four of the other Republican-appointed justices — Clarence Thomas and Trump’s three appointees — voted with Alito in the conference held among the justices, according to the draft.

If Roe is overturned, abortion would likely remain legal in liberal-leaning states. More than a dozen states have laws protecting abortion rights.