HomeSportsFrom a title fight at UFC 274 straight to her wedding: Carla...
Sports

From a title fight at UFC 274 straight to her wedding: Carla Esparza has big plans 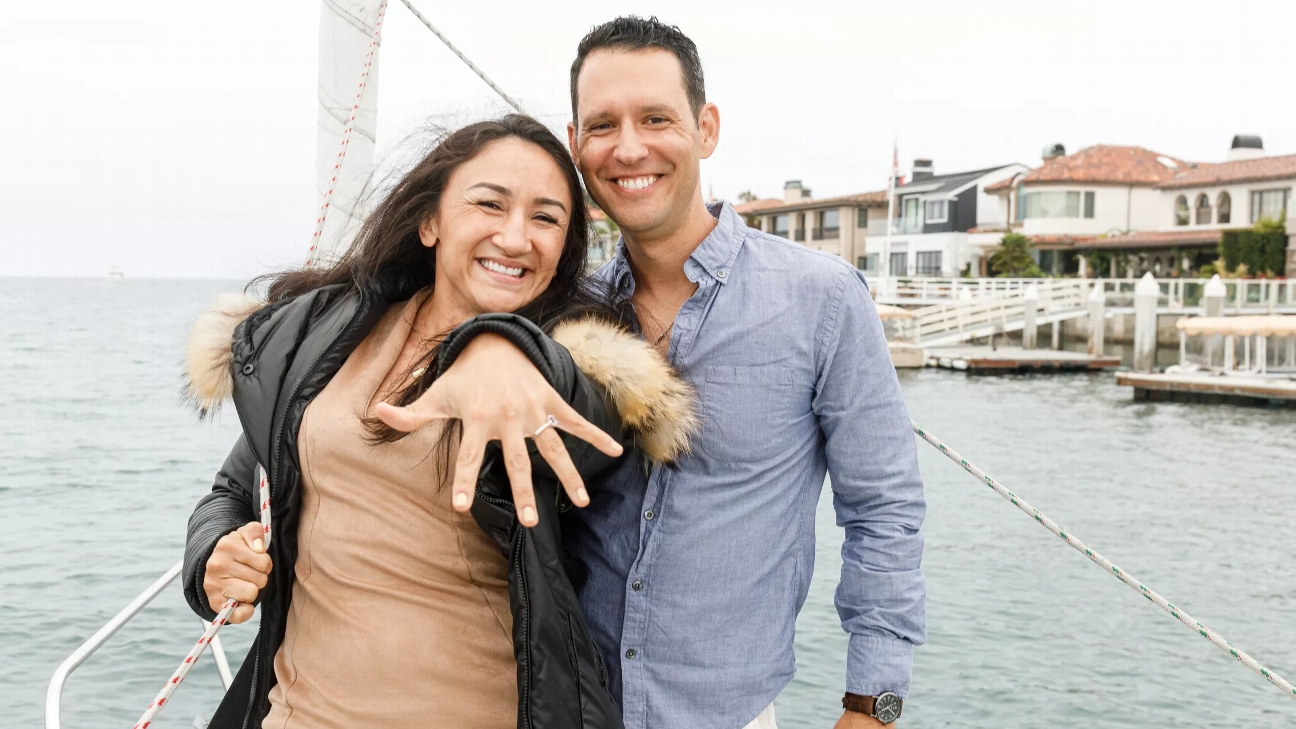 IRVINE, Calif. — Several cars pull up in front of what is normally a quiet Southern California home. The muffled voice of Matthew Lomeli, a practicing physician, can be heard coming from the house as he finishes up a Zoom call.

Lomeli considers himself to be a private person. He didn’t know what he was signing up for initially when he reached out to a potential match on the Coffee Meets Bagel dating app in 2020.

“Usually, I would do some research, make sure I’m not going to get murdered in a dark alley or something,” Lomeli joked. “The one time I didn’t look someone up and make sure [it would be safe], it was the one time I actually could have gotten beat up.”

His match on the app was former UFC strawweight champion Carla Esparza. Purposely hiding her profession in her profile, Esparza listed herself simply as a “professional athlete.”

“Being a professional fighter can definitely either steer people towards you or away,” Esparza told ESPN. “So I just kind of wanted to keep it open.”

Two titles are on the line at UFC 274. Charles Oliveira aims to keep his winning streak alive against one of the most exciting fighters in the sport, Justin Gaethje, and Rose Namajunas faces Carla Esparza in her latest strawweight title defense. Plus, Tony Ferguson faces Michael Chandler.

In lieu of the details of her having held gold in the most prestigious MMA organization, Esparza’s profile detailed her love of adventure and travel.

“I think he said, ‘Oh, Bora Bora is on my bucket list too; how’s your weekend?'” Esparza recalled of their first conversation. “We just started talking about traveling and everything.”

Lomeli had just driven home from a long weekend of wine tasting in Paso Robles when Esparza asked him to meet for drinks. He was a bit on the fence about this impromptu date, but a friend gave him the push he needed to get out the door.

“I walked up and there’s Felice Herrig all cut up [from her fight at UFC 252] and Carla too,” Lomeli recalled. “So I was a little confused and started asking questions and realized that yeah, she fights for a living. What do I even say? I know nothing about this arena. I know nothing about this sport. I’d watched a few fights here and there, but I didn’t really know anyone.”

The pair dated for two years before Lomeli asked Esparza to get married. The challenge with dating a fighter, however, is the unpredictability of when fights will be booked. After winning five fights in a row, Esparza was expected to be the next challenger for the UFC strawweight title. An opportunity that she knew, whenever it came, she couldn’t turn down.

But Esparza and Lomeli wanted to move forward. They spent months planning their wedding, and in the process, Esparza texted her closest family and friends, telling them of their May 14 wedding date. Her text was short and honest.

“Hey, this is the save the date,” she wrote. “But just so you know, I’m still waiting on this fight, so plans may change.”

The call from the UFC came on March 16. Esparza was to face Rose Namajunas at UFC 274 on May 7. One week before the wedding.

“It put me in a little bit of a spot where I had to make a decision, and it was like, do I cancel it or postpone it?” Esparza said. “And have to redo everything, maybe have to wait, like, months, and all the vendors won’t be available. Or do I go through with it and just hope for the best outcome in the fight?”

She was nervous about the decision. She wanted to look beautiful on her big day. She needed Lomeli’s help.

“I asked him, ‘What do you think I should do?’ He gave me a really supportive response: ‘I knew what I was getting myself into when I asked a fighter to marry me. Bumps and bruises come with the package.'”

Esparza’s title shot will come seven years after losing her belt to Joanna Jedrzejczyk in 2015. Esparza was devastated after that fight and admits getting her career back on a path toward the title was a struggle.

“I’d win a few, lose one, win a few,” she said. “So just getting to a place that I could really get a run going again after all those years took a lot of personal self-growth.”

She had lost two straight when everything seemed to click for her in 2019. Esparza rattled off five in a row, with statement wins over Michelle Waterson and Alexa Grasso, top contenders in the strawweight division.

“I think that my mindset and approach to things in life really changed a few years ago. And I think it’s just made the most difference.”

She also had the support she needed to keep her focused on her journey. Esparza recounts how Lomeli would leave notes around their house for her to find during camp. She knows he has been with her every step of the way leading into UFC 274.

“I feel that Matt is going to feel really connected to the experience [of fight camp] because he’s been here with me preparing for this fight. He sees my ins and outs when I come home and I’ve had a tough day at training or just all this sacrifice it takes.

“I definitely think that it’s pretty nerve-racking to be someone’s partner in this situation, especially for a fight of this magnitude.”

Lomeli says he’s stressed about the entire situation, not only because he doesn’t want to see her get hurt, but also because he has seen her compete live only once, in a Brazilian jiu-jitsu grappling match, which doesn’t allow striking. Esparza’s past few fights happened with no audience due to the COVID-19 pandemic. Lomeli will be sitting cageside with his best man — his brother — at UFC 274.

“I’m anxious because I just want to get to our wedding day. But we’re going to have a few fun events before that,” Lomeli said. “I think it’s cool. It’s almost like a dangling carrot, a little prize after the prize. Right?”

Instead of Esparza and Lomeli working together side by side on the final wedding details, the events of these last few weeks will keep them at a distance. Lomeli left for his bachelor party last week, and as he returns, Esparza will be making her weight cut and final fight preparations.

“I’m excited to kind of hear what his experience was like,” said Esparza. “Even though I am watching my close friends and doing training every day, when I see someone that I’m close to fight, I feel it through my whole body. I get so nervous and I feel it in my stomach. So I can only imagine how it’s going to feel for him.”

Esparza sent her fiancé off to his bachelor party with a pair of boxers with her face plastered all over them. One last gift to remind him what they’re celebrating.

“I think it’s going to be a crazy [next few weeks],” Esparza said. ” And I don’t think I really could be at a higher place in my fighting career or my personal life. I’m just super happy.

“Now we are going to Bora Bora for our honeymoon. I’m so excited that our story is coming full circle.”