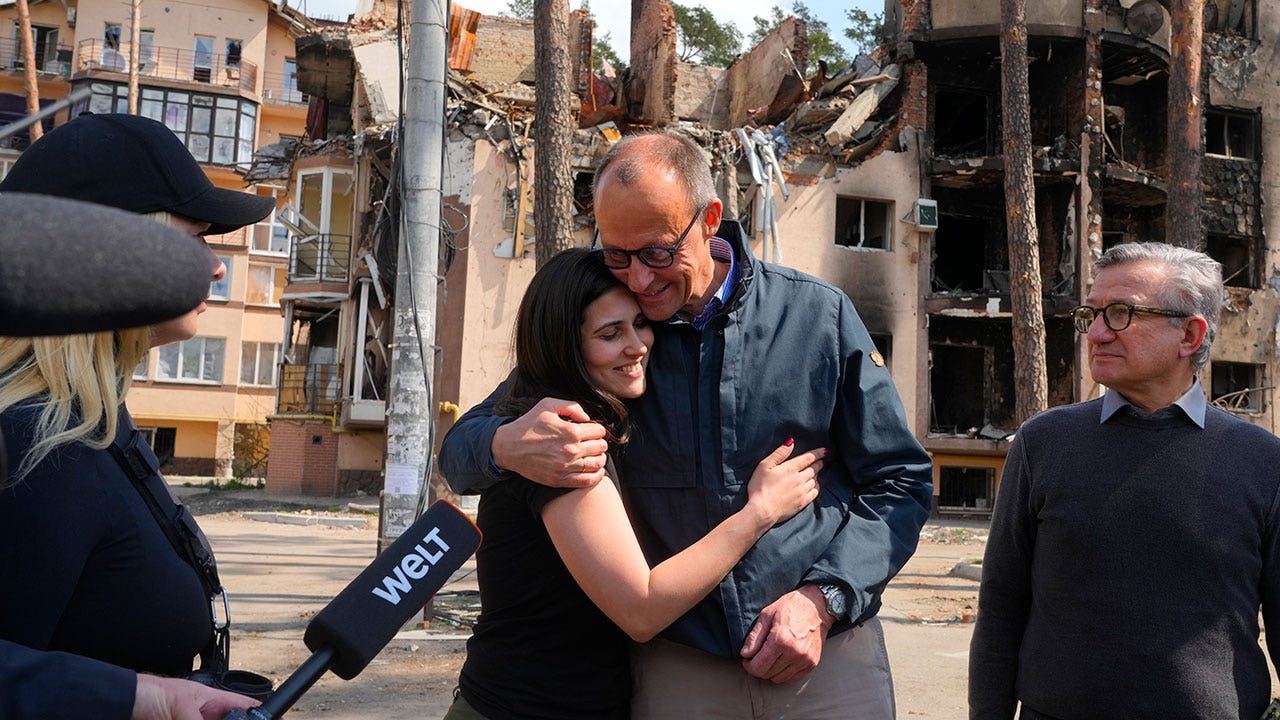 Germany’s conservative opposition leader traveled to Kyiv on Tuesday for meetings with Ukrainian officials including President Volodymyr Zelenskyy, as Chancellor Olaf Scholz made clear that he wouldn’t be visiting Ukraine any time soon.

Scholz has traded barbs with Ukrainian officials in recent weeks because of Kyiv’s refusal to invite Germany’s head of state, President Frank-Walter Steinmeier, whom Ukraine accuses of cozying up to Russia during his time as foreign minister.

“It can’t work that a country that provides so much military aid, so much financial aid … you then say that the president can’t come,” Scholz told public broadcaster ZDF late Monday.

“This is about the most brutal war of extermination since the Nazi invasion of Ukraine, it’s not kindergarten,” he said.

The Chairman of the German Christian Democratic Party (CDU) Friedrich Merz, center right, hugs with Halyna Yanchenko, a member of the Servant of the People political party, in Irpin, Ukraine, Tuesday, May 3, 2022. (AP Photo/Efrem Lukatsky)
(AP)

German opposition leader Friedrich Merz, who heads former Chancellor Angela Merkel’s center-right Union bloc, visited the town of Irpin, on the outskirts of Kyiv, to see the destruction caused by the Russian army.

Speaking to reporters against a backdrop of shelled buildings, Merz expressed his “full admiration” to the Ukrainian military for having halted the Russian advance at Irpin, and pledged to help the town rebuild.

German daily Bild reported that Merz later met for an hour with Zelenskyy at his presidential office. Merz’ visit to Kyiv comes days before two German state elections in which his Christian Democratic Union is hoping to retain power.

WHITE HOUSE SAYS BIDEN ‘WOULD LOVE TO VISIT UKRAINE,’ BUT THERE ARE ‘NO PLANS IN THE WORKS’ FOR A TRIP

Critics, particularly on the far-left and right, have argued against providing weapons to Ukraine, saying Germany risks being drawn into a conflict with Russia.

German authorities say they have recorded the arrival of some 400,000 refugees from Ukraine since the start of the war.