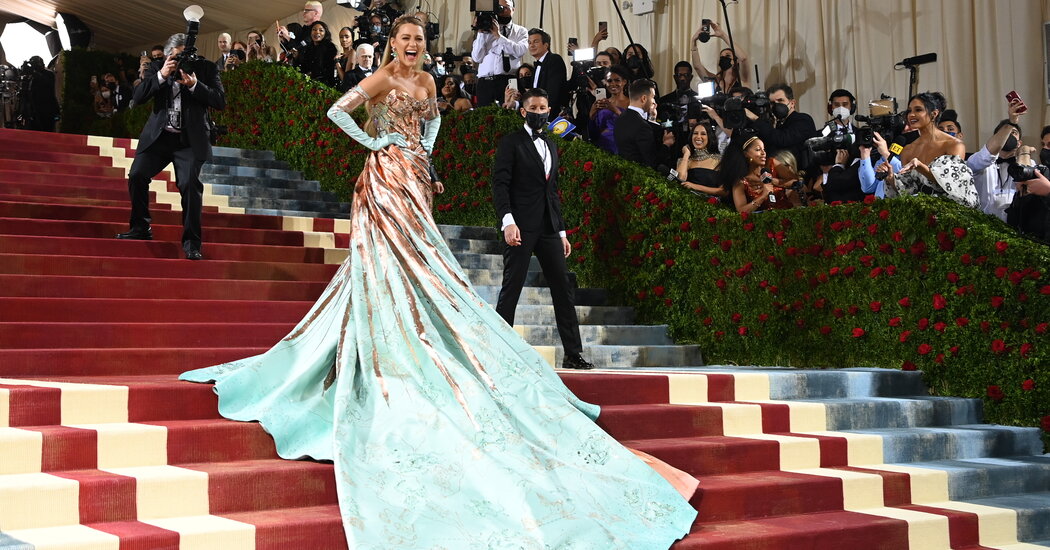 When “Gilded Glamour,” the dress code of the 2022 Met Gala, was announced, it seemed to be either a recipe for extravagant disaster or irony. After all, the current era has often been compared to the late 19th-century Gilded Age, that period between 1870 and 1900 when extreme wealth was concentrated in the hands of the very few, the robber barons came to the fore, and income inequality grew ever greater just beneath the gold veneer on the glittering surface.

That first gilded age came to a symbolic end with a famously ostentatious party, the Bradley-Martin Ball of 1897, in which many of the attendees, the good and great and greedy of New York society, dressed in full swag as Marie Antoinette. Also, Queen Louise of Prussia.

Was this really what the organizers were going for?

Or could it be, went one interpretation, that by evoking just such a moment, the orchestrators of the current famously ostentatious Met Gala were suggesting that guests dial it back, rewrite history, exercise some restraint. Stop dressing as if for a costume ball in which the goal is to out-Instagram one another.

That idea was blown off the table as soon as Blake Lively, a co-host, appeared in a gleaming copper Versace column festooned in swathes of bustled silk that later unfurled into a verdigris-toned train embroidered with the constellations of Grand Central Station. It was a medley of skyscraper dreams rolled into one magic morphing dress. Along with the gown she wore matching opera gloves and a tiara like the Statue of Liberty. Next to her, her husband (and co-host), Ryan Reynolds, in classic white tie, faded into oblivion.

It set the tone for the night.

Those who played it understated simply got lost in the excess. Even Elon Musk, richest man in the world, harbinger of the current gilded age, Twitter disrupter, doing his best to suggest a responsible steward of a public utility in his white tie and tails, barely made a ripple. There was just so much to see.

There was gold — gilt apparently without the guilt. (Of course; no one said interpretations of the theme had to be subtle.) So there was Cardi B, draped in more than a kilometer of body-conscious Versace chains and jewelry, and here was Megan Thee Stallion in gleaming feathers and brocade, like a 24-karat Moschino Valkyrie. There was Carey Mulligan, whose Schiaparelli bustier and train were embroidered with 79,000 gold sequins; and here was Chloe Bailey, whose metallic, strapless Area column recreated the exaggerated curves and hips of a corset and pannier without resorting to those body-shaping devices.

Though lots of others did.

Corsets were the accessory of the evening, along with capes, opera gloves (best on Kodi Smit-McPhee, who paired his red Bottega Veneta pair with a white tuxedo shirt and “jeans” made of leather), tiaras (Hamish Bowles wore a Verdura crown last seen in 1957 at Buckingham Palace) and trains.

In the waist-cinching stakes, the tightest statement may have been made by Billie Eilish as a sort of Gothic bordello madam in bustled Gucci satin and green lace — all upcycled from fabrics in the atelier. Lenny Kravitz, in leather and lace, Paloma Elsesser in a white Coach number, and Evan Mock in ice cream tones and a white neck ruff by Head of State, like a sorbet Little Lord Fauntleroy, came close.

Feathers were also a trend, on the honorary co-chair Anna Wintour (in Chanel), Nicola Coughlan (in Richard Quinn) and, in two relatively subtle looks, Emma Stone in a white Louis Vuitton slip dress and Hailey Bieber in white Saint Laurent.

They were the evening’s palate cleansers, the yin to the yang of the peekaboo black dresses with strategically placed period detailing of Vanessa Hudgens in Moschino, Phoebe Dynevor in Louis Vuitton and Precious Lee in Altuzarra wearing (yes) another corset. They were a reminder that, in fact, sometimes less is actually more, on an evening of rapacious ruffles seemingly dedicated to the opposite idea.

A reminder of a different sort came courtesy of Riz Ahmed, who said in a Vogue interview on the red carpet that his unbuttoned silk workwear shirt, tank top and trousers tucked into knee-high boots were “a homage to the immigrant workers that kept the Gilded Age going.”

The outfit was by 4SDesigns, but that the accompanying chain around his neck was an 18-karat white gold, platinum, chalcedony, turquoise and diamond necklace by Cartier somewhat complicated the point.

Less so Questlove, wearing a quilt by the Gee’s Bend quilters under his Zegna coat to represent “Black women who had sacrificed for their country.” Because, he said, “for African Americans in this country the gilded period’s a little bit different.”

They weren’t the only ones to try to add layers, at least conceptually, to their outfits. Hillary Clinton, attending the gala for the first time in two decades, wore a burgundy Altuzarra gown with the names of 60 American women who had inspired her embroidered on the hem, including Abigail Adams, Clara Barton, Rosa Parks — and her mother, Dorothy Rodham.

And Mayor Eric Adams of New York, whose decision to attend the gala was not without controversy given the state of the city, modeled a tailcoat by Laolu Senbanjo with the message “End Gun Violence,” as well as M.T.A. and other metropolitan symbols on the back and lapels.

As it happened, the city — or rather its skyline — was also the inspiration for Alicia Keys’s sparkling Ralph Lauren column and cape, which had the soaring silhouettes of the Empire State Building and the Chrysler Building picked out in silver on the hem, a nod to the equally soaring ambitions of the industrialists whose dicey legacy built this town. Ditto Kaia Gerber’s steel-silver Alexander McQueen, though the ripples of the Titian hair she wore with it evoked Lady Godiva even more than architecture.

Still, when it came to channeling history, Kim Kardashian, making the final entrance of the evening with Pete Davidson, topped them all. Not just because she managed to shoehorn herself into Marilyn Monroe’s famous “Happy Birthday, Mr. President” nude dress — literally, the same one, which Ms. Kardashian wore to climb the steps, immediately swapping it for a copy in order to move on to dinner. Not just because for the first time the entire Kardashian female clan had been invited.

It was because, in receiving the honor of being the last to arrive, she, a pop culture figure born of reality TV who had once been barred from the gala guest list, conclusively demonstrated that it is influence and fame, not just pedigree and filthy lucre, that are the real currency of success; the keys that unlock the doors of even the most exclusive events. Today, even more than in the original Gilded Age.