HomeLife StyleReview: Making a Beautiful ‘Case for the Existence of God’
Life Style

Review: Making a Beautiful ‘Case for the Existence of God’ 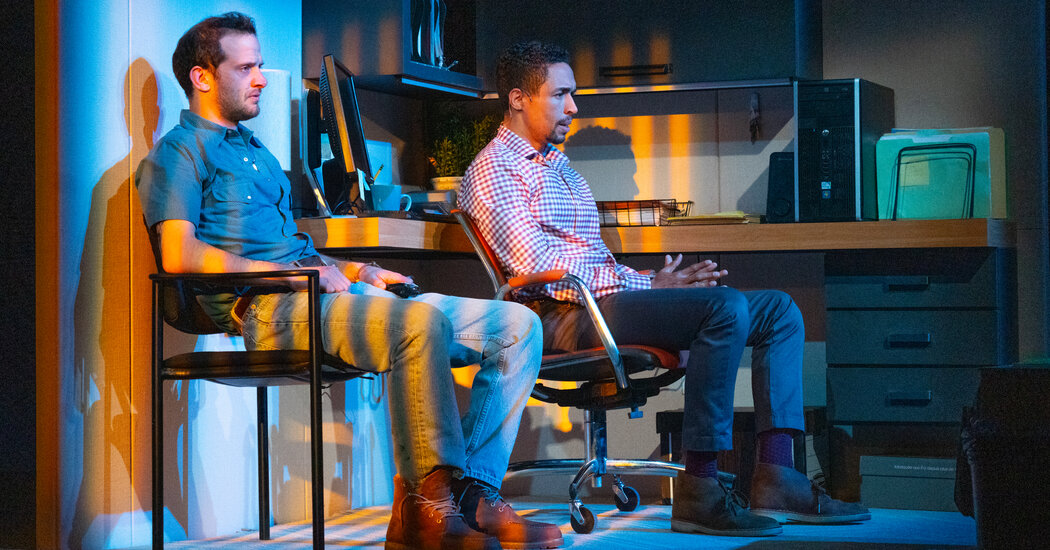 About a third of the way through “A Case for the Existence of God,” Samuel D. Hunter’s must-see heartbreaker of a play, one character, Ryan, tells the other one, Keith, “I think we share a specific kind of sadness.”

The insight would seem almost comically unlikely if it came any sooner. Ryan (Will Brill) has been introduced to us as a feckless screw-up: undereducated, hopeless with money, scraping by at a yogurt plant. Though he claims to have written a novella, he does not know what “harrowing” means.

He would seem to have nothing in common with Keith (Kyle Beltran), an uptight, button-down professional who uses the word casually. Financially savvy and culturally sophisticated, Keith has a dual degree in Early Music and English. For fun he listens to motets.

That Ryan is white and straight, and Keith is Black and gay, also comes into it. You could not make more neatly matched opposites if you were designing a new kind of magnet.

But by the time Ryan blurts out to Keith what he sees as their fundamental connection, Hunter’s meticulous plotting has led us to the same conclusion. We are somehow ready to understand that the unlikely statement is both powerfully true and, perhaps, universal. The question is: What is the purpose of a sadness you can share but not escape?

“A Case for the Existence of God,” which opened on Monday in a Signature Theater production directed exquisitely by David Cromer, is another of Hunter’s public explorations of his own private Idaho: a post-boom, existential vastness in which emotional and economic collapse are conjoined. Earlier plays set in Lewiston, Boise, Pocatello and others have dealt with people failing to thrive in the barrenness of Costcos, Hobby Lobbys and sub-Olive Garden restaurants.

And though “A Case” makes the connection between personal and societal calamity more explicit than ever — can it be just an accident that it’s set in Twin Falls? — it may also be the purest example yet of Hunter’s approach to playwriting as an experiment in empathy.

Ryan is the primary beneficiary of that experiment here. Except for his being human, there is nothing huge about him, either heroic or horrendous, that would suggest the makings of a typical main character. Indeed, he has come to Keith, a mortgage broker, with only a very small dream in his pocket: to repurchase 12 acres of property that once belonged to his family. By making a home there, he hopes to show the courts considering his divorce from his wife that he is stable enough to share custody of their 15-month-old daughter.

If Ryan is terrified of losing his child, Keith’s version of the same fear comes from a very different source. As the play begins, he has for more than three years been trying to become a father, first through surrogacy and, when that failed, through foster care leading to adoption. The girl eventually placed with him is about the same age as Ryan’s — the men met at their daughters’ day care — but the threat to Keith is entirely external. A relative of the birth mother has, at the last minute, expressed interest in raising the child herself.

The two processes depicted in the play — getting a loan, adopting a child — turn out to be similar, at least for men who, for different reasons, are outsiders to the systems that control their fate. Though Ryan feels that “money is the only real permission I have to be alive,” he is so naïve about how it works, never having had any, that he suggests sending photos to potential lenders to show he’s a “decent guy.” Keith has likewise staked his life’s happiness — his very legitimacy — on institutions that find single men, let alone gay ones, inherently unworthy.

As a parent by adoption myself, I have to say that the adoption plot felt absolutely authentic in a way it rarely does in plays. Less so the banking plot; I’ve been through that, too. Only a loan shark would dream of risking a dime on Ryan, as Keith would instantly have known.

But Hunter is too complex a playwright to let us bask for long in the procedural aspects of the story anyway — or, for that matter, in the awkwardly growing bond between the men. He is more interested in the misalignment of their needs and abilities; as is nearly inevitable for people damaged in different ways, they can help each other only so much. When you want Keith to be gentle, he lashes out; when you want Ryan to face facts, he can’t. And the world is neither man’s friend.

Or is it, eventually? Though the “case” of the title is not proved, it is argued beautifully by the surprising resolution, which suggests that failure may not be the end of the story. That thin thread of optimism depends on the extreme delicacy of Cromer’s production to produce its outsize effect. Most of the play moves in drolly inconclusive eddies of suppressed feeling, scene flowing into scene without pause or signpost, until, having pulled back from emotion for so long, it can’t be contained any longer. Even then, Cromer puts the lid back on as soon as possible; when Keith has a panic attack, why should we get a catharsis?

The design follows accordingly. The set, by Arnulfo Maldonado, depicts the cramped cubicle Keith occupies at his brokerage; framed like a cell by the vastness of the Pershing Square Signature Center stage, it could induce a panic attack all by itself. The men never even get out of their chairs until the play suddenly evolves near the end, at which point the set evolves too, producing an almost geological change in atmosphere. The costumes by Brenda Abbandandolo, lighting by Tyler Micoleau and sound by Christopher Darbassie are equally subtle and affecting.

The same can be said for Brill and Beltran, always fine on their own but never better and more in sync with an acting partner than here. Perhaps only when people are so comfortable together (the actors were roommates at Carnegie Mellon School of Drama) can discomfort be played and transcended so authentically. Even negotiating Hunter’s slight writerly tics — the way he sometimes spins gears to delay the next development — they backfill each moment with a depth of feeling that gives a quiet play, in many ways a comedy, the density of tragedy.

It’s the kind of tragedy, though, that hurts by means of hope, like land broken up to take seeds. If Ryan began the play not knowing that’s what “harrowing” means, he soon learns — as do we.

A Case for the Existence of God
Through May 15 at the Pershing Square Signature Center, Manhattan; signaturetheatre.org. Running time: 1 hour 30 minutes.