Amber Heard Testifies About a ‘Pattern’ of Violence by Johnny Depp 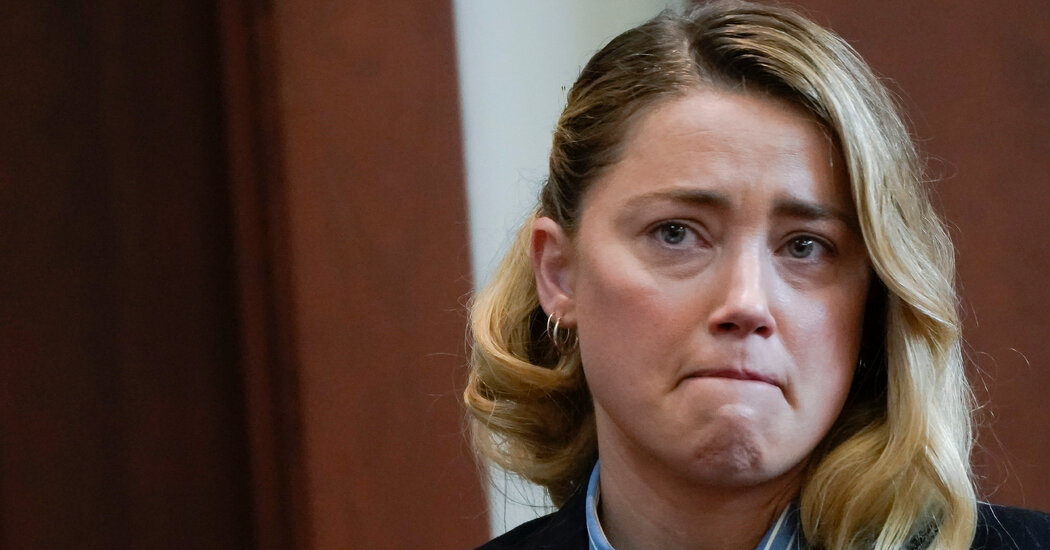 Amber Heard, an actress defending herself against a defamation lawsuit filed by her ex-husband, Johnny Depp, took the stand on Wednesday, recalling how a whirlwind romance that started on a movie set descended into a “pattern” of violence perpetrated against her by the actor.

The couple first got to know each other in 2009 on the set of “The Rum Diary,” a movie that Mr. Depp produced and starred in, and they fell in love on the movie’s press tour, Ms. Heard testified. But by 2012, she said, Mr. Depp was repeatedly accusing her of infidelity and his anger would often escalate to physical attacks, despite her denials.

“He would explode,” Ms. Heard said, recounting how Mr. Depp would punch walls next to her head, shove her to the ground and slap her repetitively.

Ms. Heard often grew emotional during her testimony as she explained the physical confrontations in graphic terms, at times appearing chagrined as she gave reasons for staying in the relationship despite her misgivings.

“He was the love of my life,” Ms. Heard said. “But he was also this other thing. And that other thing was awful.”

In four days of testimony earlier in the trial at Fairfax County Circuit Court, Mr. Depp denied ever hitting Ms. Heard or any other woman. He accused her of being the aggressor in the relationship, describing instances in which he said she punched him and threw objects at him.

But Ms. Heard has also denied ever hitting Mr. Depp, except in self-defense or in defense of her sister, and she provided a very different account of their relationship, which ended in divorce in 2017. In her account, it was Mr. Depp who would often erupt into fits of jealous rage, especially when he had been using drugs or alcohol.

Once in 2013, Ms. Heard recalled, Mr. Depp accused her of an affair and then slapped her with the back of his hand, on which he wore rings.

“I remember kind of just feeling like my lip went into my teeth,” she testified, “and it got a little blood on the wall.”

The trial revolves around an op-ed from Ms. Heard, published by The Washington Post in 2018, in which she described herself as a “public figure representing domestic abuse.” Mr. Depp sued Ms. Heard over the op-ed, saying that even if the article did not name him, it was clearly alluding to their relationship, and that its publication had a devastating effect on his movie career.

Ms. Heard, 36, countersued Mr. Depp, 58, alleging that he defamed her when his former lawyer released statements saying her allegations of abuse were a hoax.

In the first three weeks of the trial, Mr. Depp’s lawyers called witnesses with the intention of proving that Ms. Heard’s domestic abuse claims were fictions that had severely damaged Mr. Depp’s career. They have also sought to prove that Ms. Heard was the primary abuser, playing audio of the couple discussing an incident in which Mr. Depp said Ms. Heard kicked a bathroom door into his head.

Ms. Heard’s lawyers have argued that her statements in the op-ed are true, and that even if the jury determines it doesn’t have enough evidence to show Mr. Depp physically abused Ms. Heard, “domestic abuse” can include verbal and emotional abuse as well.

“If Mr. Depp abused Ms. Heard physically, verbally, emotionally or psychologically, even one time, then she wins,” said Ben Rottenborn, a lawyer for Ms. Heard, in court on Monday. “It’s that simple.”

But Ms. Heard testified that Mr. Depp abused her far more than once.

The first time he hit her, she said, was about two years before they were married, when the actress laughed at one of his tattoos. He slapped her across the face three times, she said, a gesture so stunning that she initially responded with a laugh because she thought it must have been a joke.

But when he objected to her laughing, she said she realized he had not been jesting and just stared at him silently. Soon Mr. Depp began crying, she said, and got down on his knees to tell her, “I thought I put the monster away.”

In the courtroom. A defamation trial involving the formerly married actors Johnny Depp and Amber Heard is currently underway in Fairfax County Circuit Court in Virginia. Here is what to know about the case:

Ms. Heard’s op-ed. Mr. Depp’s suit was filed in response to an op-ed Ms. Heard wrote for The Washington Post in 2018 in which she described herself as a “public figure representing domestic abuse.” Though she did not mention her former husband’s name, he and his lawyers have argued that she was clearly referring to their relationship.

The domestic abuse claims. In the 2020 trial, Ms. Heard accused her former husband of assaulting her first in 2013, after they began dating, and detailed other instances in which he slapped her, head-butted her and threw her to the ground. Mr. Depp has since accused her of punching him, kicking him and throwing objects at him.

Ms. Heard remembered going to her car, leaning her head against the window and sitting there for a while before she drove home. Days later, she said, Mr. Depp was calling and texting to apologize profusely for what had happened, and then showed up with a couple cases of wine and said it would “never happen again.”

“I knew it was wrong and I knew that I had to leave him,” Ms. Heard testified, “and that’s what broke my heart because I didn’t want to leave him.”

In his testimony, Mr. Depp had denied slapping her, saying, “I’m certainly not going to strike a woman if she decides to make fun of a tattoo I have on my body.”

Another time, Ms. Heard testified, Mr. Depp engaged in an invasive search of her body for drugs that he thought she was hiding from him. That search occurred after Mr. Depp had smashed objects in a trailer where the couple was vacationing, enraged that another woman who was with them had gotten too close physically to Ms. Heard, she said. (In his testimony, Mr. Depp said the woman had been “very affectionate” with Ms. Heard and so he had removed the woman’s hand from Ms. Heard. That led to an argument later between the couple in their trailer, during which he said he punched a sconce in the bathroom.)

At the beginning of her testimony, Ms. Heard said it had been difficult to sit in the courtroom as Mr. Depp presented his case, listening as her ex-husband and others testified about their tumultuous relationship.

“This is the most painful and difficult thing I have ever gone through,” Ms. Heard said.