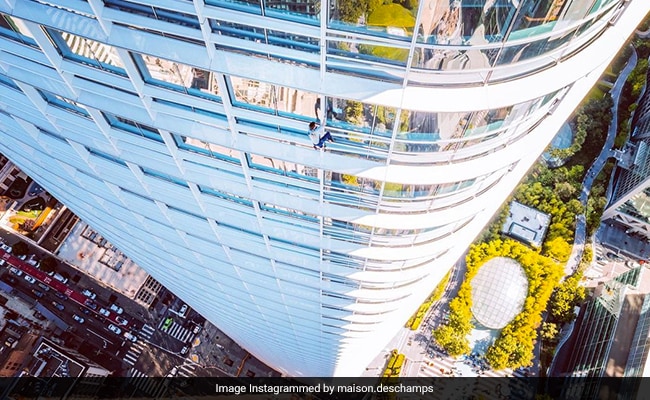 A video is going viral on the internet, which shows a man climbing San Francisco’s Salesforce Tower without a harness or safety rope. He has been identified as Maison DesChamps, who calls himself “pro-life Spiderman”.

He scaled the 1,070-feet tower on Tuesday, May 3, to protest against abortion. Maison was arrested after successfully completing the feat.

Videos circulating on social media platforms like Twitter and Instagram show the 22-year-old climbing the building floor-by-floor till he reaches the top. He was first noticed by people around the skyscraper at around 9:21 am on Tuesday, who then called the police.

Maison kept posting pictures and videos of himself on Instagram while trying to scale the building. He later explained in one of the videos on his Instagram handle the reason for performing this dangerous stunt – to raise money for anti-abortion charities.

His target was Dr Cesare Santangelo, an abortionist, who is facing the heat over recovery of the remains of 115 aborted babies outside his clinic last month.

“Dr. Cesare Santangelo is an abortionist from Washington DC. Over a month ago pro-life activists with help from a whistleblower obtained the bodies of 5 murdered babies that had come out of Dr. Santangelo’s clinic. These babies were murdered during late-term abortion and it is believed that some even survived their abortions and were left to die,” Maison said in his post.

“Dr. Cesare Santangelo is not in jail and there is currently no investigation. The recovered bodies were not examined but instead discarded as medical waste. Dr. Cesare Santangelo needs to be held accountable. The goal of this peaceful mission is to spread the word and get Dr. Santangelo put in jail,” the post further said.

“Love you Mais, just saw you made the summit,” one user said. “Glad you made it safe,” another commented.

“Mannn u need a doctor,” commented a third user.

The Salesforce Tower, formerly known as the Transbay Tower, is a commercial skyscraper in downtown San Francisco that was completed in 2018. It has 60 floors and is the 17th tallest building in the United States.

Share
Facebook
Twitter
Pinterest
WhatsApp
Previous articleMissouri executes man who shot couple in the back of their heads during robbery in their home in 1996
Next article4 concerts to catch in the D.C. area over the next several days