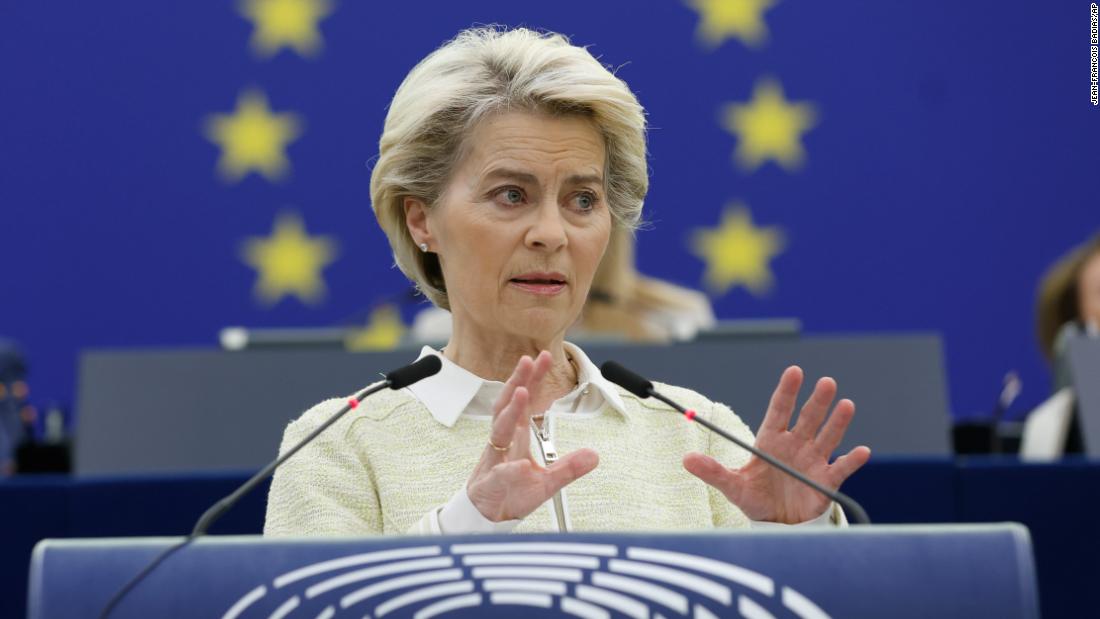 But the plan immediately ran into opposition from EU countries seeking a longer transitional period, including Hungary, which has reportedly already been offered an extra year to ditch Russian oil.

European Commission President Ursula von der Leyen said earlier Wednesday the measures would form part of a sixth round of sanctions against Russia over its invasion of Ukraine.

“We now propose a ban on Russian oil,” she said during a speech to the European Parliament. “Let’s be clear: it will not be easy. But we simply have to work on it. We will make sure that we phase out Russian oil in an orderly fashion, to maximize pressure on Russia, while minimizing the impact on our own economies.”

Crude oil supply would be phased out within six months, and imports of refined oil products by the end of 2022, she added.

News of the proposal boosted crude oil prices by about 4%. Brent, the global benchmark, was trading at nearly $109 a barrel, while US oil futures were above $106 a barrel at 12.30 pm ET.

Oil prices have risen by about 40% since the start of the year on fears that Russia’s invasion of Ukraine will deliver a supply shock, fueling inflation and piling pressure on European economies.

EU countries have already agreed to phase out Russian coal imports but the bloc has found it much harder to reach consensus on an oil embargo despite weeks of talks.

Hungary said it couldn’t back the proposal in its current form because it was worried about what it would mean for the country’s energy security. Nearly 60% of its imported oil came from Russia in 2021, according to the International Energy Agency.

“The very essence of decision-making in Europe is consensus,” Kovacs said. “We’ve been telling Brussels and all the European states, that on Hungary’s behalf, it simply cannot be done as they require.”

Slovakia — which got 92% of its oil imports from Russia last year — and the Czech Republic have also sought longer transition periods than those envisaged by the EU plan, Reuters reported.

Russia is the world’s second-biggest crude oil exporter, and last year accounted for about 27% of EU oil imports. The United States, Canada, United Kingdom and Australia have already banned imports.

Those sanctions — and a de-facto embargo by some European oil refineries and traders — have hit the price of Russian oil. Its benchmark Urals crude is now trading at a $35 per barrel discount to Brent, compared with less than $1 before the invasion.

Some customers in Asia are reportedly buying more Russian oil but not in sufficient volumes to offset the loss of Western buyers.

“Russia’s ability to redirect all unwanted cargoes from the West to Asia are limited, meaning that, in the case of embargoes, Russia will be forced to cut production further as it lacks storage capacity for extra crude volumes,” analysts at Rystad Energy wrote in a research report on Monday.

But the surge in global prices for oil and natural gas means Moscow continues to earn vast amounts of money from its energy exports. Rystad estimates that Russia will collect more than $180 billion in energy tax revenues this year — up 45% on 2021 — despite the oil production cuts.

Western countries continue to look for other ways to make it harder for Russian President Vladimir Putin to finance his war effort. Von der Leyen said the EU was proposing to remove Sberbank (SBRCY), and two other major banks, from the SWIFT system, the secure network that more than 11,000 financial institutions use to send messages and payment orders.

The Society for Worldwide Interbank Financial Telecommunication, based in Belgium, must comply with EU regulations. With no globally accepted alternative, it is essential plumbing for global finance.

— Anna Cooban and Julia Horowitz contributed to this article.