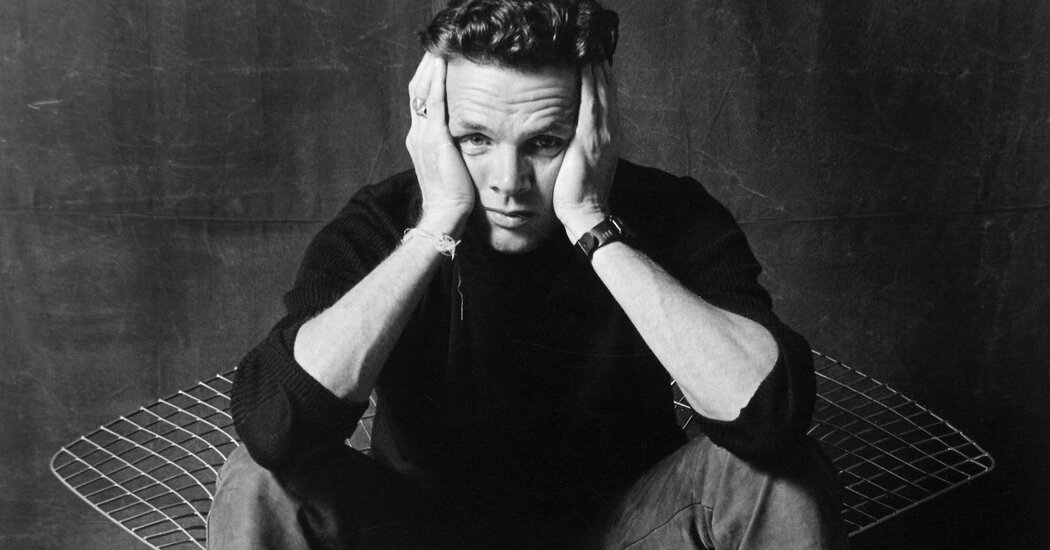 Marcus Leatherdale, who made classical portraits of Manhattan’s demimonde in the 1980s — Keith Haring, Andy Warhol and Sydney Biddle Barrows, otherwise known as the Mayflower Madam, all made their way to his Lower East Side studio — died on April 22 at his home in the state of Jharkhand, India. He was 69.

The cause was suicide, said Claudia Summers, his former wife. His partner of two decades, Jorge Serio, died in July, and Mr. Leatherdale suffered a stroke soon after, Ms. Summers said, adding that he had also been mourning the death of the couple’s dog and his mother in the last year.

Mr. Leatherdale was the Cecil Beaton of Downtown Manhattan. He photographed a not-yet-famous club kid named Madonna in her ripped jeans and his denim vest. The performance artist Leigh Bowery was majestic in a tinseled mask, corset and a merkin. Andy Warhol was a Hamlet in a black turtleneck. Susanne Bartsch, the nightlife impressaria, was a towering presence in red leather.

The Montreal-born Mr. Leatherdale had already traveled through India and Afghanistan in a van and been to art school in San Francisco before he landed in New York City in 1978, moving into the Wild West of the Lower East Side. He and Ms. Summers shared a loft on Grand Street, where Mr. Leatherdale set up his studio.

Theirs was not a traditional marriage, but they were best friends, and he was Canadian, so it made life easier if they wed. His boyfriend for a time was Robert Mapplethorpe, whose photography studio he also managed. Mr. Leatherdale and Mapplethorpe were a striking pair, dressed like twins in leather and denim, their faces as if painted by Caravaggio, and they often photographed each other.

Jean-Michel Basquiat was often hanging out there, playing his bongo drums; so were friends like Cookie Mueller, the doomed, gimlet-eyed author and Details magazine contributor who was for a time Mapplethorpe’s and Ms. Summers’ drug dealer, and Kathy Acker, the performance artist and novelist. But mostly what went on in the loft was Mr. Leatherdale’s work.

For Details magazine, a chronicle of downtown Manhattan’s creative communities — its galleries, clubs and boutiques — Mr. Leatherdale had a regular column called Hidden Identities, for which he would contribute veiled portraits of his friends.

He photographed Joey Arias, the husky-voiced drag performer, as a Japanese snow princess. Keith Haring was a rakish Santa Claus. Robin Byrd, the amiable stripper and cable television host, wore only her cowboy boots and a thong. Ms. Barrows, christened the Mayflower Madam for her lineage as head of a high-powered Manhattan escort service, wore a ball gown.

When Annie Flanders, Details’s editor (who died in March), pushed Mr. Leatherdale to include those whose fame extended above 14th Street, he photographed subjects like Jodie Foster, dressing the actress in a satin corset with a pouf skirt, one arm draped across her face — an atypical costume for someone more at ease in bluejeans.

“His photographs were a celebration of why we moved to New York City in the first place,” she said, “which was to be in the midst of that kind of creativity and boundary pushing in terms of gender and sexuality. Not that we thought of it that way or spoke in those terms. Marcus photographed the best of who we were, these idealized versions.”

Marcus Andrew Leatherdale was born on Sept. 18, 1952, in Montreal. His father, Jack, was a veterinarian; his mother, Grace Leatherdale, was a homemaker. He attended the San Francisco Art Institute and, once in New York, the School of Visual Arts.

Unlike Mapplethorpe, who died of AIDS in 1989, and to whom he was often compared, and unlike many of his subjects, Mr. Leatherdale seemed less focused on his own fame.

“He didn’t seem to be going for the glory in the same way that Robert was,” said David Hershkovits, co-founder of Paper magazine. “He was more restrained. I don’t feel like he was ever distracted by what anybody else was doing. Shiny objects wasn’t his thing.”

“Robert was determined to be a star, at all costs,” Mr. Leatherdale told I-D magazine in 2017. “So when I started to be known for my photography, tensions grew.”

He added: “We were artistic comrades, at first, until I got recognition. But in all fairness, NYC is a place where everyone is very career-oriented. I too was very ambitious, but not competitive.”

Yet Mr. Leatherdale, with typical self-deprecation, said he viewed Mapplethorpe as the “more accomplished artist.”

Critics often lumped the two together, even years after Mapplethorpe’s death.

“Marcus Leatherdale’s work has remained somewhat in the shadow of that of his senior colleague, Robert Mapplethorpe,” Holland Cotter wrote in a review of Mr. Leatherdale’s work in 1992. “Both take the nude figure as a central image; both show a penchant for theatrically posed and lighted studio setups. Whereas Mapplethorpe went for a combination of shock and slickness, however, Mr. Leatherdale’s recent work displays an interest in carefully staged tableaux with a symbolic content.”

By the 1990s, Mr. Leatherdale was photographing almost exclusively in India, making portraits of Hindu holy men, temple beggars, fishermen and pilgrims in the same elegant, classical manner he developed in New York City. He was drawn to the rawness of the life there, and the spirituality, Ms. Summers said. Later, he began to document the Adivasis tribes, a far-flung minority population.

“I want to preserve the tradition of these proud people as best I can, somewhat like Edward Curtis did with the American Indians,” he told an interviewer in 2016. “My work can be viewed as anthropological portraiture, even the vintage New York City work of the 1980s.”

With his partner, Mr. Serio, a makeup artist, he made homes in India, New York and Portugal.

Ms. Summers and Mr. Leatherdale divorced in 2018. He is survived by a brother, Robert. Information on other survivors was not available.

In 2019, Mr. Leatherdale collected his work from the 1980s in a show called “Out of the Shadows,” at the Throckmorton Fine Art gallery in Manhattan, and in a book of the same title, written with Ms. Summers. It’s a haunting record of a vanished time and place — collectively, a true memento mori, as Ms. Summers said, “though we didn’t realize it at the time.”

There is Divine, the star of John Waters’ “Pink Flamingos,” regal in a satin shift, crowned in a beehive. There, too, is Ms. Mueller, Tina Chow, Mapplethorpe and others who would soon be dead from AIDS. Stephen Reichard, once a handsome art dealer and consultant who liked to dress in sharp, expensive suits, is naked and skeletal from AIDS, a pieta on a hard wooden chair. It was his decision to be photographed this way in 1988, and to climb the three flights to Mr. Leatherdale’s loft on his own, though he struggled. Mr. Reichard died a few weeks later.

“I didn’t realize I was archiving an era that was going to be extinct,” Mr. Leatherdale said recently. “I was just getting by. This is just what we were up to. Of course, you think you will be 20 forever.”