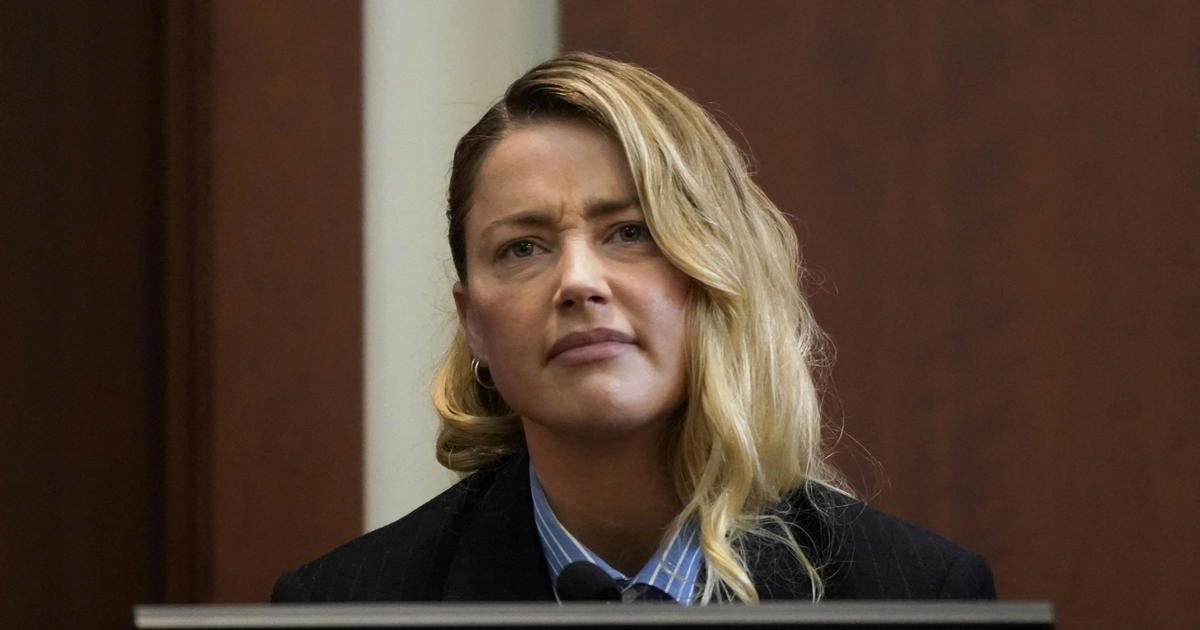 Actor Amber Heard took the stand Wednesday afternoon, following cross-examination of the first witness called by her attorneys. She is being sued by ex-husband and Hollywood star Johnny Depp, who spent four days on the stand earlier in the libel trial.

Heard told jurors how difficult it has been for her to relive her troubled marriage to Depp as part of a libel lawsuit he filed against her.

“I struggle to find the words to describe how painful this is,” she said at the outset of her testimony. “This is horrible for me to sit here for weeks and relive everything.”

She described an incident when she and Depp were having a conversation and she asked him what one of his tattoos said. He replied that it said “Wino.” Heard testified, “I just laughed because I thought he was joking, and slapped me across the face.”

“I didn’t know what was going on. I just stared at him, kind of laughing still, thinking he was going to start laughing too, to tell me it was a joke. But he didn’t. He said, ‘You think it’s so funny? You think it’s funny, b****?’ … And he slapped me again.”

She said she didn’t know how to react. “I as a woman had never been hit like that,” she said.

“I just stared at him because I didn’t know what else to do. And he slaps me one more time. Hard.”

She continued, “I’m all of a sudden realizing that the worst thing has just happened to me that could possibly happen to you.”

Psychologist Dawn Hughes testified Tuesday that Heard suffered post-traumatic stress disorder from violence she suffered at the hands of Depp, including multiple acts of sexual assault.

Depp has said he never physically attacked Heard, and that she was the aggressor who routinely hit him and threw things at him through the course of their relationship. Depp is suing Heard for $50 million in Fairfax County Circuit Court after Heard wrote a December 2018 op-ed piece in The Washington Post describing herself as “a public figure representing domestic abuse.” The article never mentions Depp by name, but Depp’s lawyers say he was defamed nevertheless because it’s a clear reference to abuse allegations Heard levied in 2016, in the midst of the couple’s divorce proceedings.

Hughes’ testimony contradicted that of a psychologist hired by Depp’s lawyers, who said Heard was faking her symptoms of post-traumatic stress disorder and suffered from borderline and histrionic personality disorders. Hughes disputed that Heard suffers from any personality disorder.

Hughes, in her testimony, said Heard acknowledged that she did at times push and shove Depp, call him names and insult his parenting. Hughes said she based her testimony on 29 hours of interviews with Heard, as well as interviews with her therapists and a review of court documents.

During cross-examination Wednesday, Hughes acknowledged that she wasn’t making factual determinations that Depp assaulted Heard on specific occasions. But she testified that Heard’s account of her experiences are consistent with accounts of those experiencing domestic violence.

Hughes said Heard initially was framing the encounters as consensual but “angry sex.”

“She wasn’t framing them as physical force,” Hughes said.

The trial, now in its fourth week, continues to capture public attention. More than 100 people, mostly Depp supporters and fans, were lined up Wednesday before 7 a.m. outside the courthouse for the 100 seats made available in the courtroom.

Share
Facebook
Twitter
Pinterest
WhatsApp
Previous article‘Moon Knight’ took Marvel in a different orbit, but it didn’t rise to the occasion
Next articleReview | Nilüfer Yanya sings in a remarkable voice as complex as her heritage