HomeLife Style‘Wish You Were Here’ Review: The Saga of Female Friendship
Life Style

‘Wish You Were Here’ Review: The Saga of Female Friendship 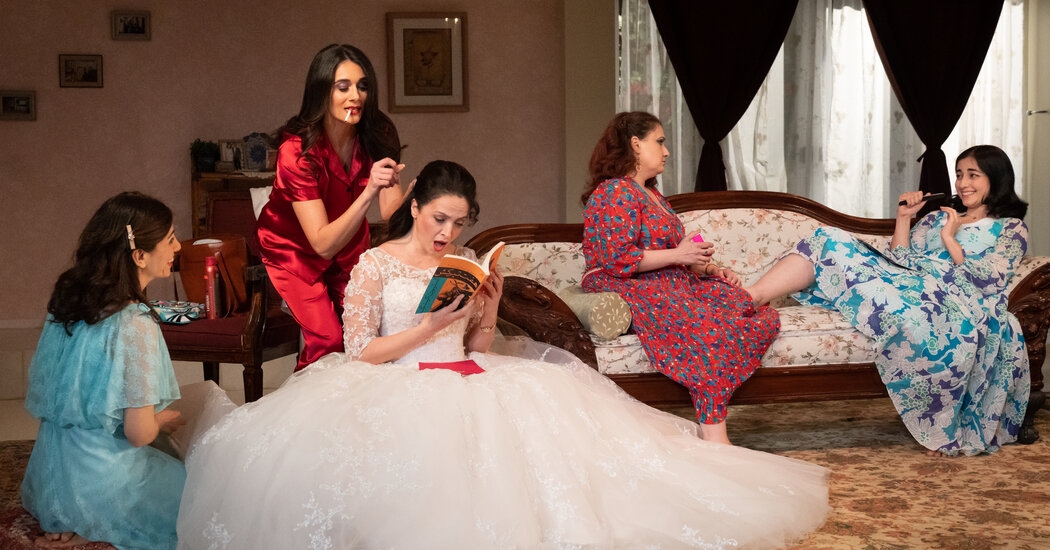 The five Iranian women of “Wish You Were Here,” which opened on Tuesday night at Playwrights Horizons, joke about sex and their bodies. They file one another’s toenails and lick their cheeks with a disarming degree of comfort. And they show off their psychic connections by playing rounds of “What am I thinking?”

Yet these friends can also be vicious, mocking one another with the targeted hits of a loved one who knows where to stick the knife.

The playwright Sanaz Toossi drops in on this group in 10 scenes — one for almost every year from 1978 to 1991, a period encompassing the Islamic Revolution, the Iran-Iraq War and the country’s steps toward economic stability. Pushing that upheaval somewhat awkwardly to the background, Toossi focuses instead on the women and how their relationships to one another — and to themselves — change with marriages, deaths and sudden departures. Their friendship is its own saga of constantly fluctuating degrees of intimacy and friction.

We meet the women at around 20 years old, all preparing for a wedding in a living room in Karaj, Iran: Salme (Roxanna Hope Radja) is the bride, wearing a snowy-white dune of lace and tulle, “big in a way that sort of feels humiliating,” according to the neurotic Shideh (Artemis Pebdani). Rana (Nazanin Nour), a rambunctious firecracker still dressed in her red silk pajamas, promises never to get married or have kids. Same goes for the churlish, eye-rolling Nazanin (Marjan Neshat), who’s aiming for an engineering degree. Zari (Nikki Massoud), carelessly reposed over a very 1970s floral couch, gives the impression of a naïve youth. These women taunt and prod one another, their insecurities and fears often colliding like bumper cars at a carnival.

Though the pure Salme, who faithfully prays for what she believes is the best for her friends — a husband and children for Nazanin, admission into an American medical school for Shideh — seems like she’ll be our main protagonist in the beginning, that’s quickly shown to not be the case. Nazanin becomes the anchor of every scene, even as the other women enter and exit, though, structurally, the play hadn’t previously indicated that would be the case.

Gaye Taylor Upchurch’s direction tries to bring out the color of these women’s personalities but collides with the limits of the script, which, squeezing 13 years into a 100-minute run, struggles to focus its lens and communicate the subtle dynamics among the friends. The characters lack context, beyond the very occasional mention of a fiancé or child, and so their actions — which they always make outside of the isolation of this one living room — lack stakes. The sequence of marriages and the not-so-distant sirens of war turn up as transparent markers of progress, but they never believably penetrate the tiny bubble of time and space where these characters live.

Arnulfo Maldonado opts for a kitschy set of a living room with patterned rugs, pink and beige walls and ornate Iranian furniture, though the stage remains oddly static even as the production moves through different living rooms across 13 years of different fashions, as beautifully captured in Sarah Laux’s costume design, from the pastry-pouf wedding dress and flirty bridesmaids dresses of the ’70s to a denim maxi skirt in the ’80s. Reza Behjat’s lighting design gracefully captures the sunrises and sunsets of the passing years.

Still, each of the actresses gives an expert performance. Pebdani, who has played one of my favorite recurring characters on the comedy series “It’s Always Sunny in Philadelphia,” is just as funny here as Shideh, though she has minimal scenes and little to work with. Nour and Radja bring appropriate exuberance and softness, respectively, to their characters, and in Zari, Massoud presents an arc from guilelessness to self-awareness and maturity.

Neshat, who provided profoundly expansive performances in another recent Playwrights production, “Selling Kabul,” and as the complexly drawn Toefl teacher in “English,” continues her streak of rich, marrow-deep character portrayals. With each of her characters, Nazarin included, Neshat gradually sheds their armors of self-possession and strength, their reserve and resolve, to reveal how fragile, scared and insecure they truly are. In other words, Neshat transforms empathy into a dramatic act we witness, in real time, on the stage.

With her last produced work, the Atlantic and Roundabout theater companies’ scintillating production of “English” from February, Toossi accomplished wonders with her language; she offered an examination of national identity, othering and the construction of a private and public self all within the subtle discussions of phonetics, pronunciation and syntax in an English language class in Iran. There are glimmers of that work here, too, as in the exquisite poetry of the final scene. (“She will never know how fast this earth can spin underneath you,” one character, now an American expat, swears in a monologue about her future daughter. “How one day you can have a home, and the next, as you are hurtling through the air, you will have to vanquish home.”)

Even as “Wish You Were Here” circles around themes of the female body and national politics, aiming to land somewhere with a statement, it constantly backs away. In a playwright note, Toossi asks: “Doesn’t every play exist within a set of politics? Must a play be political if the events of the play are affected by the politics of the play’s setting? Isn’t every play political? I can’t decide.” Unfortunately, despite the successes of the production, the playwright’s indecision creeps through.

It’s exciting to see a portrayal of the complexity of female friendships, including both the niceties and the petty rivalries alike. It’s something I’ve been considering a lot lately in conversations with my female friends — how we have shaped and been shaped by one another, how we’ve grown into or outgrown the roles we’ve been assigned in each other’s lives. There’s so much to appreciate and even more to explore here, within the confidences of rowdy, supportive, spiteful women; I just wish we’d have witnessed it onstage.

Wish You Were Here
Through May 29 at the Peter Jay Sharp Theater, Manhattan; playwrightshorizons.org. Running time: 1 hour 40 minutes.