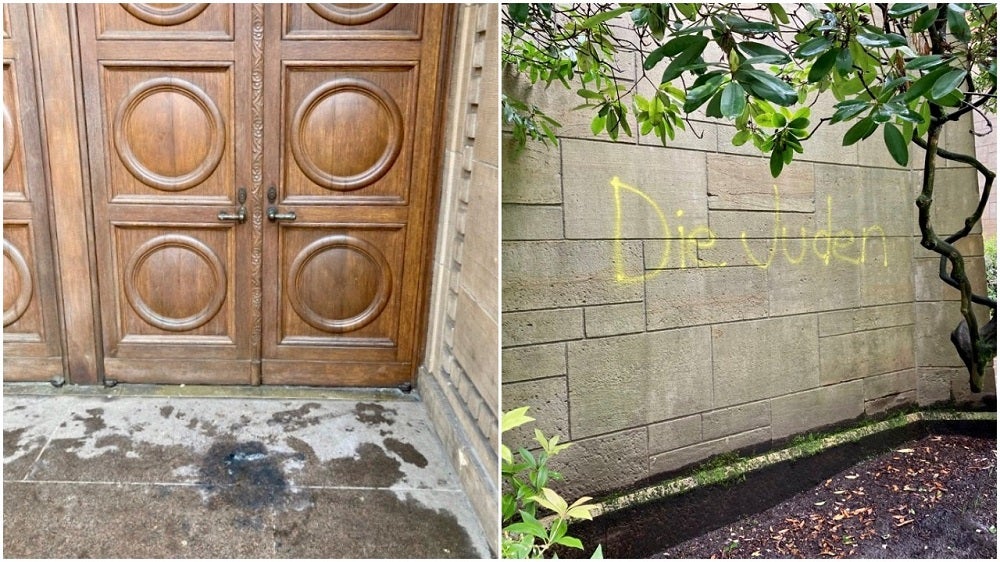 Police are offering a reward for information regarding recent acts of vandalism and arson against a synagogue in Portland, Oregon.

Scorch marks were discovered Monday on the doors of Congregation Beth Israel in northwest Portland. Anti-Semitic graffiti that read “Die Juden” was scrawled in yellow spray paint against one of its walls.

Rabbi Michael Z. Cahana condemned the vandalism and noted how recently it took place after Holocaust Remembrance Day on April 28.

“It’s easy for us in Portland to think this doesn’t happen around here. That we’re free of antisemitism and hate speech, but the reality is it’s very much a part of our world,” Cahana told Oregon Live. “It’s very much of a part of the Pacific Northwest.”

Cahana said he does not believe the vandalism is part of a wider plot but urged people to remain cautious.

“But be aware,” Cahana said. “And how poignant it is to have this just a few days after having our community’s Holocaust survivors in our sanctuary, where we were honoring their eyewitness, their experience. It really recommits us to being vigilant against antisemitism.”

Police, Portland Fire & Rescue and Crime Stoppers of Oregon are offering $2,500 for information leading to an arrest in the case.

Sen. Ron Wyden, D-Ore., who is a member of Congregation Beth Israel, condemned the vandalism in a Facebook post.

“Hate speech and vandalism must never be allowed to terrorize Portland or any community,” Wyden wrote. “I stand with Rabbi Cahana and our entire synagogue by adding my voice to his when he says we all must be vigilant against these attacks.”

Investigation into the acts against the synagogue come as Portland police are also searching for an unidentified man who targeted the city’s Muslim Community Center and attempted to set the building on fire in an unrelated incident. Authorities the act against the center may be a bias attack.