HomeSportsGolf on safari: animals roam the greens at Africa's only PGA-accredited course
Sports

Golf on safari: animals roam the greens at Africa’s only PGA-accredited course 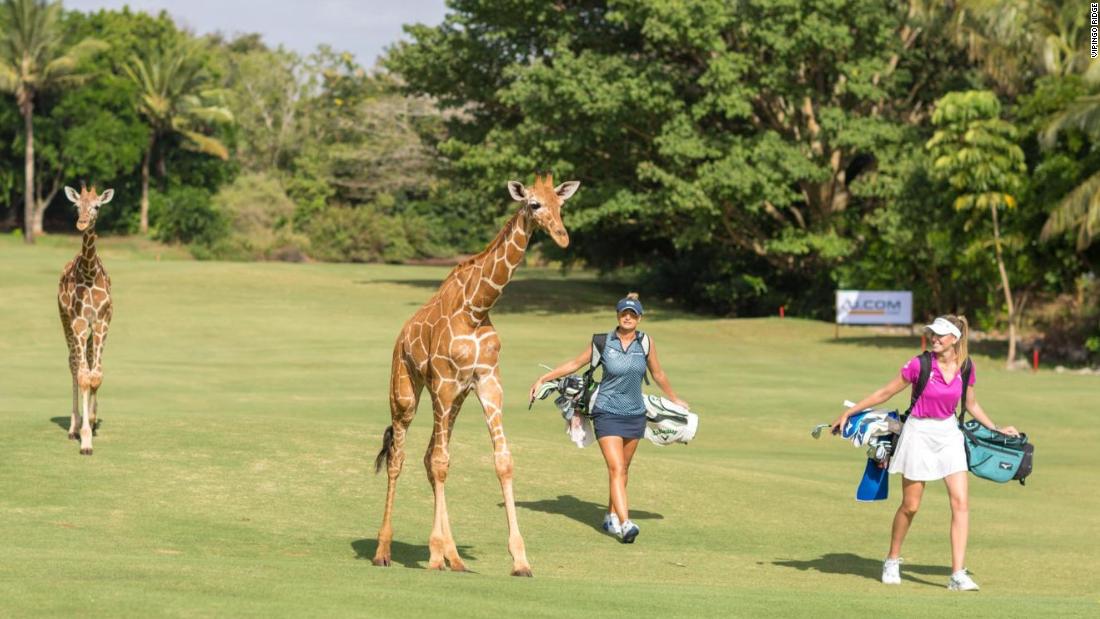 (CNN) — The hole six feet ahead of him, a golfer lines up his putt. Six feet behind him, a giraffe strolls idly by.

From birdies and eagles to guest appearances from deer and alligators, golf has long-enjoyed a connection with the animal kingdom. That pairing has rarely been more harmonious than at Vipingo Ridge, in Kenya.

A sprawling 2,500 acre mixed-use development on the country’s coastline, Vipingo Ridge is home to Africa’s only PGA accredited course, as well as a range of wildlife. With many arriving as rescues, a host of the region’s wild species are free to roam the entirety of the Baobab course, which is dotted with indigenous trees planted for its animal guests.

At Vipingo Ridge, in Kenya, golfers get to play alongside all kinds of wildlife.

“It’s such a nice thing to be able to go play golf and you’ve got wildlife just around you,” Vipingo Ridge’s director of golf Saleem Haji told CNN. “It’s not false, not a zoo … that’s where they want to be.”

Vipingo Ridge is an example of how large areas of privately owned land can be converted into animal sanctuaries or conservancies, Kenya’s Minister of Wildlife and Tourism Najib Balala told CNN

Vipingo Ridge from the sky.

It is hoped that animals such as antelope and the Grévy’s zebra, brought in from other African countries, can find a safe haven among the greens of Baobab course, Balala added.

For Vipingo Ridge chairman Alastair Cavenaugh, it is crucial to be proactive in order to protect wildlife. “Our intention is to create ultimately a breeding program where we can breed up stocks and improve gene pools with a view to then — in conjunction with KWS (Kenyan Wildlife Service) — reintroducing them either to the wild, into the parks or to other sanctuaries and conservation areas like ourselves,” Cavenaugh explained.

“With the way the population is expanding, human-wildlife conflict is only going to go one way and get worse. So I think there’s a lot of opportunity and scope for the government to partner developers and land owners who have land that they can commit to sanctuaries and conservation areas to create space for wildlife.”

Preserving and enhancing the future of Kenyan golf is also a priority at Vipingo Ridge, which serves as a base for training some of the country’s top young women’s players.

The course once again played host to the Magical Kenya Ladies Open, an event on the Ladies European Tour, in February, following a two-year hiatus, with Germany’s Esther Henseleit successfully defending her crown.

Vipingo Ridge will be hoping that future winners could emerge from its on-site PGA Academy. Overseen by a PGA professional, the academy has a range of cutting-edge equipment, and offers custom club fitting as well as swing analysis for all players, courtesy of a high-tech launch monitor. Using four high-speed cameras to track the club head and the ball, the monitor spits out data that can be used to tweak technique and equipment.

Sanna Nuutinin of Finland during the Magical Kenya Ladies Open at Vipingo Ridge in 2019.

“The technology golf has in the last 15 years has been dramatic,” Haji said. “The influence of technology … (in) understanding how to generate the most speed, which means you can hit the ball further — in today’s game it’s key.”

Next door to the academy, a club repair and assembly facility offers almost 200 club shafts of various materials and weights, providing near endless amounts of customization for players to fine tune the contents of their golf bag.

Haji believes Vipingo Ridge’s efforts to blood the next generation of golfing talent are reflective of the sport’s increasing popularity in Kenya. “I think golf is growing in the country,” he said. “There’s a general consensus that we need to involve a broader range of players, starting with kids.

“This has to go away from being the domain where rich kids can play and poor kids can’t — because Kenya has ambitions to produce champions.

“The more people you embrace to come and try out, the more chance you’ve got of finding a champion, that’s for sure.”