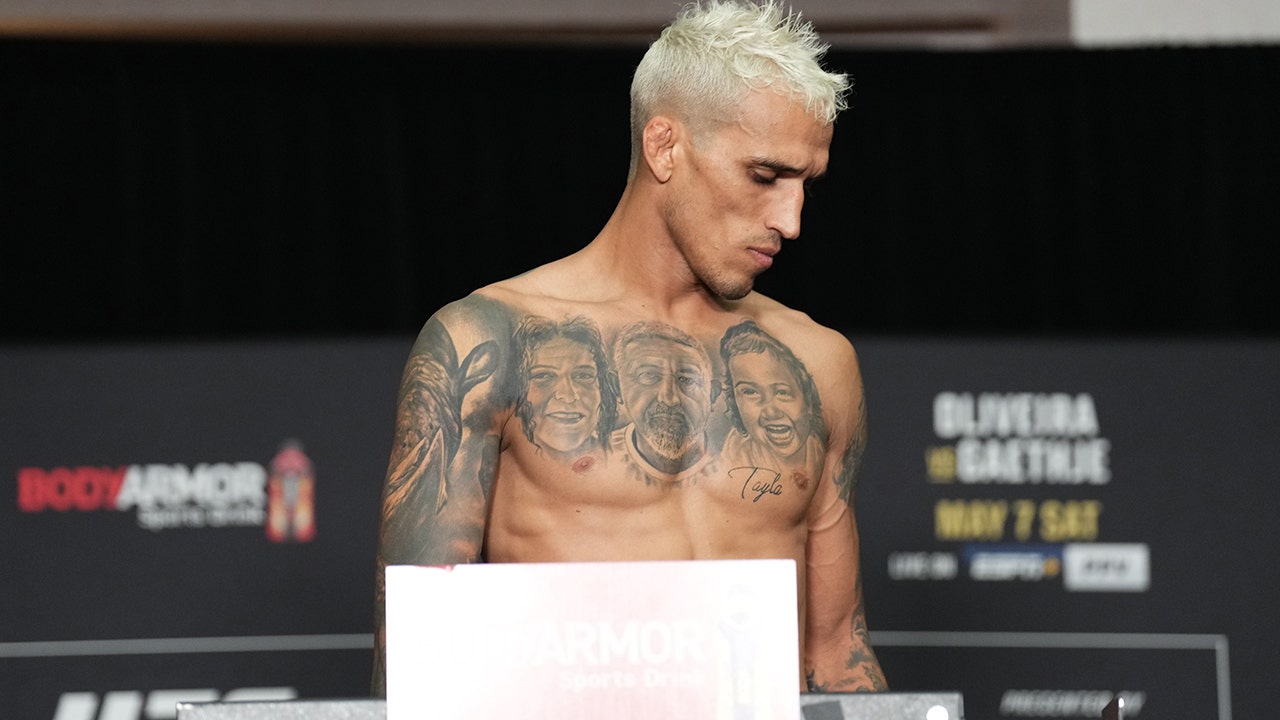 The two were set to square off for the lightweight title, but Oliveira, a 32-year-old Brazilian, missed weight by a half pound and was stripped of his title. He came in at 155.5 pounds. Gaethje weighed in at 155 pounds on the dot.

Charles Oliveira of Brazil and Justin Gaethje face off during the UFC 274 press conference at Arizona Federal Theatre May 5, 2022, in Phoenix, Ariz.
(Chris Unger/Zuffa LLC)

The other main event is still on for Saturday night in Phoenix.

Oliveira arrived to the weigh-in with about 5 minutes to spare and missed weight on the initial check. After getting another hour for a second chance he missed weight again, according to ESPN.

Oliveira hasn’t commented on the weight mishap, but he was getting flak on social media for a tweet posted before the weigh-in seemingly suggesting he wasn’t going to miss weight.

Charles Oliveira of Brazil on stage during the UFC 274 press conference at Arizona Federal Theatre May 5, 2022, in Phoenix, Ariz.
(Chris Unger/Zuffa LLC)

Oliveira was coming in on a 10-match winning streak, having won each bout since June 2018. He last defeated Dustin Poirier via submission in December.

Charles Oliveira of Brazil reacts after failing to make weight, vacating the UFC lightweight championship during the UFC 274 official weigh-in at the Hyatt Regency hotel May 6, 2022, in Phoenix, Ariz.
(Chris Unger/Zuffa LLC)

Gaethje recently defeated Michael Chandler in November 2021 via submission. His only loss since 2018 was to the Khabib Nurmagomedov.

The other main event between Rose Namajunas and Carla Esparza will go on as planned. That fight is a strawweight title rematch of the first-ever strawweight bout in 2014.