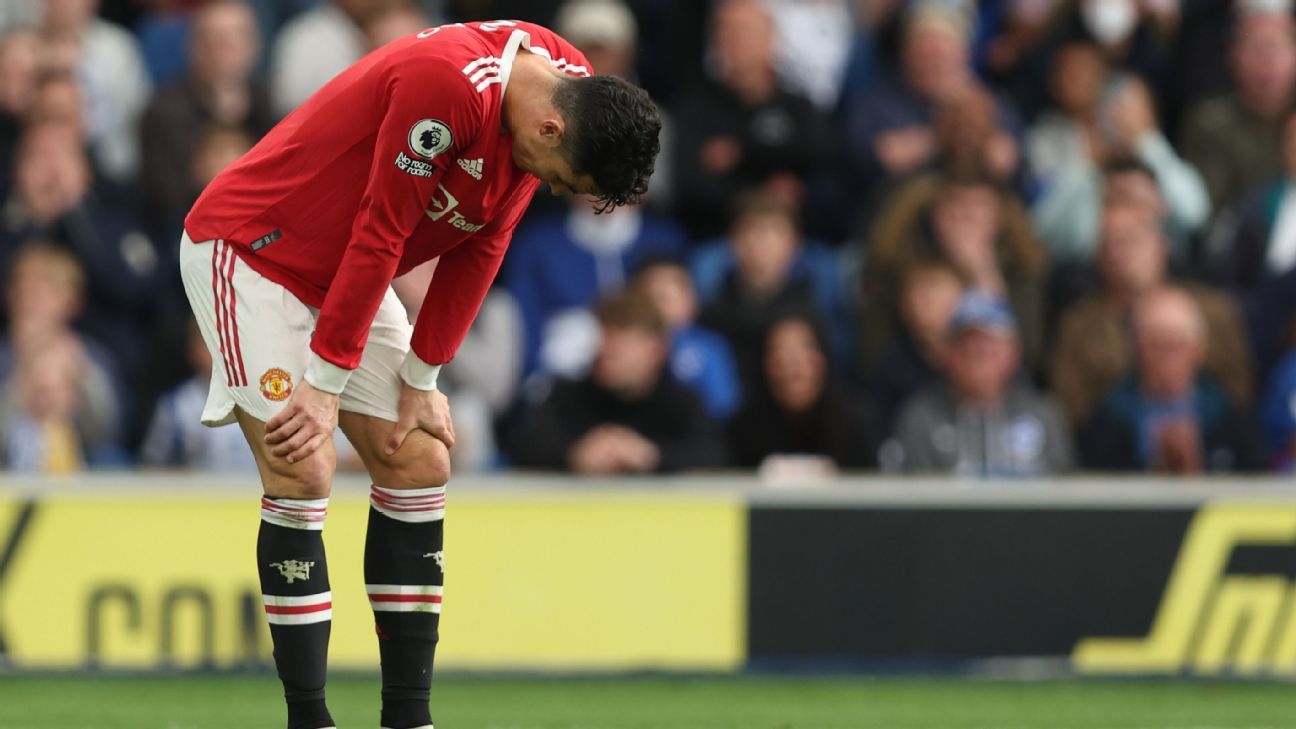 Manchester United‘s abysmal Premier League campaign hit a new low on Saturday night as they fell to a 4-0 loss at the hands of Brighton & Hove Albion.

The Red Devils looked slow from the word go and were made to pay for their poor play as Moises Caicedo put Brighton 1-0 up within 15 minutes. The Seagulls played with freedom and pizzazz and in the second half, they ran riot with goals from Marc Cucurella, Pascal Gross and Leandro Trossard rounding off an embarrassing evening for Rangnick’s men.

On the face of it, you could make an argument that one of the main positives for the visitors was that the scoreline didn’t exceed a four-goal deficit. They were defending much more resiliently to avoid further decline and on the odd chance they made something happen in the final third, it was always through some nice, quick passing in and around the box.

This was as close to a disaster-class as an ‘elite’ club can get. United looked afraid to be out there and, in a general sense, didn’t appear to care about any sort of intensive attacking moves. They were bullied, predictable with their decision making, anxious at every turn and just didn’t have any kind of direction aside from playing it back to one of their only capable first-teamers.

Manager rating out of 10

Ralf Rangnick, 4 — the Man United interim manager is so often viewed as a genius within the global football landscape but this just reiterated how lackluster he’s been since taking charge at Old Trafford. His starting XI was uninspired, the changes made it seem like he was on automatic from Monday’s win and there was no passion whatsoever from him on the touchline, which apparently resonated with his players.

– Which Premier League teams will qualify for Europe?
– ESPN+: Man Utd chat and more on ESPN FC Daily (U.S. only)

GK David De Gea, 4 — He could’ve been more alert for a few of the goals but in the end, the defenders in front of the Spaniard really let him down.

DF Alex Telles, 4 — A few good clearances couldn’t mask over an evening full of clumsy control and a lack of understanding of any basic defensive instincts.

DF Raphael Varane, 3 — Nearly gifted Brighton a goal, fell over himself countless times and was partly at fault for most of the errors his side made.

DF Victor Lindelof, 4 — A particularly off game for Lindelof who seemed to fall down to the level of those around him, particularly with his reactions to Brighton surging forward.

DF Diogo Dalot, 4 — Showcased a bit of drive in the last 10 minutes which was needed, especially after a sloppy yellow card and a questionable demeanour.

MF Nemanja Matic, 3 — From lethargic passing to not taking his time in possession, it’s no wonder Matic has one foot out of the door.

MF Scott McTominay, 3 — The Scot looked as uncoordinated as a Premier League player possibly could with a distinct lack of quality in all facets of his game.

MF Bruno Fernandes, 4 — Only really started putting his best foot forward when the game was dead and buried which speaks volumes about his current form.

MF Juan Mata, 5 — Between a nice effort in the second half and showcasing some good urgency, the only thing that let the veteran down was his pace.

MF Anthony Elanga, 4 — The youngster had to drop incredibly deep just to get any sniff of the ball and after failing to deal with the physicality of the opposition, he was subbed off.

FW Cristiano Ronaldo, 4 — The Portuguese sensation can shake his head all he wants but ultimately he was slow and ineffective in front of goal.

DF Harry Maguire, N/R — The captain forced a nice save with a header and actually showed some heart at both ends of the pitch.

MF Fred, 3 — In one of the worst cameos of the season thus far, Fred couldn’t keep the ball at his feet and was woeful with his positional play.

FW Edinson Cavani, 5 — While the veteran did force a few nice saves, his most notable contribution was a disallowed goal that highlighted United’s frustrations.