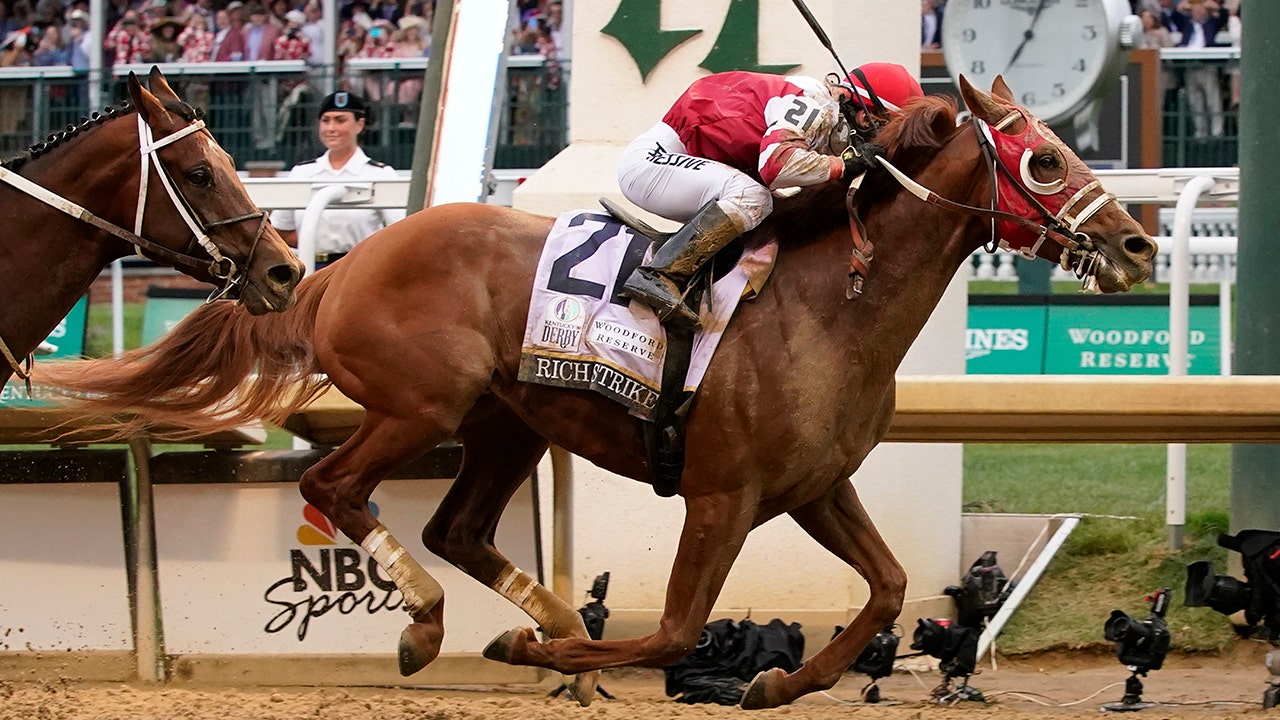 Rich Strike galloped to one of the biggest upsets in Kentucky Derby history on Saturday when he zoomed past Epicenter on the last stretch of the race to win the first leg of the Triple Crown.

Sonny Leon, in his first Derby, rode Rich Strike to the winner’s circle. The horse, which hadn’t won a race since Maiden Claiming at Churchill Downs last September, somehow pulled together in the final few yards to get the first win.

Rich Strike (21), with Sonny Leon aboard, beats Epicenter (3), with Joel Rosario aboard, at the finish line to win the 148th running of the Kentucky Derby horse race at Churchill Downs Saturday, May 7, 2022, in Louisville, Ky.
(AP Photo/Mark Humphrey)

Rich Strike was eligible for the race but only got into the event after Ethereal Road was scratched. The horse was bred in Kentucky by Calumet Farm and is owned by Richard Dawson’s RED TR-Racing, LLC. Eric Reed is the trainer.

Rich Strike (21), with Sonny Leon aboard, crosses the finish line to win the 148th running of the Kentucky Derby horse race at Churchill Downs Saturday, May 7, 2022, in Louisville, Ky.
(AP Photo/Mark Humphrey)

Dawson said he found out he was in the Derby 30 minutes before the deadline.

“I knew the horse could do it if he could find his way through the traffic. [Sonny Leon] gave him the greatest ride I’ve ever seen,” Reed said.

Leon said he brought his whole family with him to the race to watch him. Looking back at the race on NBC, Leon said “it was amazing.”

The colt was mostly in the back or the middle of the pack during the race and it wasn’t until the finish line got closer when Leon decided to make a move and Rich Strike went from about fourth place to the front of the leaders.

Fans watch the first race of the day at Churchill Downs Saturday, May 7, 2022, in Louisville, Ky. The 148th running of the Kentucky Derby horse race is scheduled for later in the day.
(AP Photo/Charlie Riedel)

“We are elated to see no known injuries during the running of the 148th Kentucky Derby and we congratulate the Rich Strike team, Churchill Downs, and the Derby on a successful event that saw the second-longest shot in history win the ‘Run for the Roses.’ American horse racing is closer to getting back on the right track,” Animal Wellness Action executive director Marty Irby said in a statement to Fox News Digital.

“The absence of Lasix and other drugs, coupled with infamous trainer Bob Baffert’s suspension following a failed drug test with Medina Spirit, and Churchill’s support of the Horseracing Integrity and Safety Act, put the ‘Run for the Roses’ in a much better light than we’ve seen in many years, and we hope the Preakness Stakes and Belmont Stakes see no injuries and much success as well.”

An over-excited horse was also seen biting the guide ponies before going back to the stables.

Rich Strike had finished in third place in the Jeff Ruby Steaks in April, fourth in the John Battaglia Memorial Stakes in March and fifth in the Gun Runner Stakes in December.

The Preakness Stakes is next for Rich Strike. The race is on May 21.