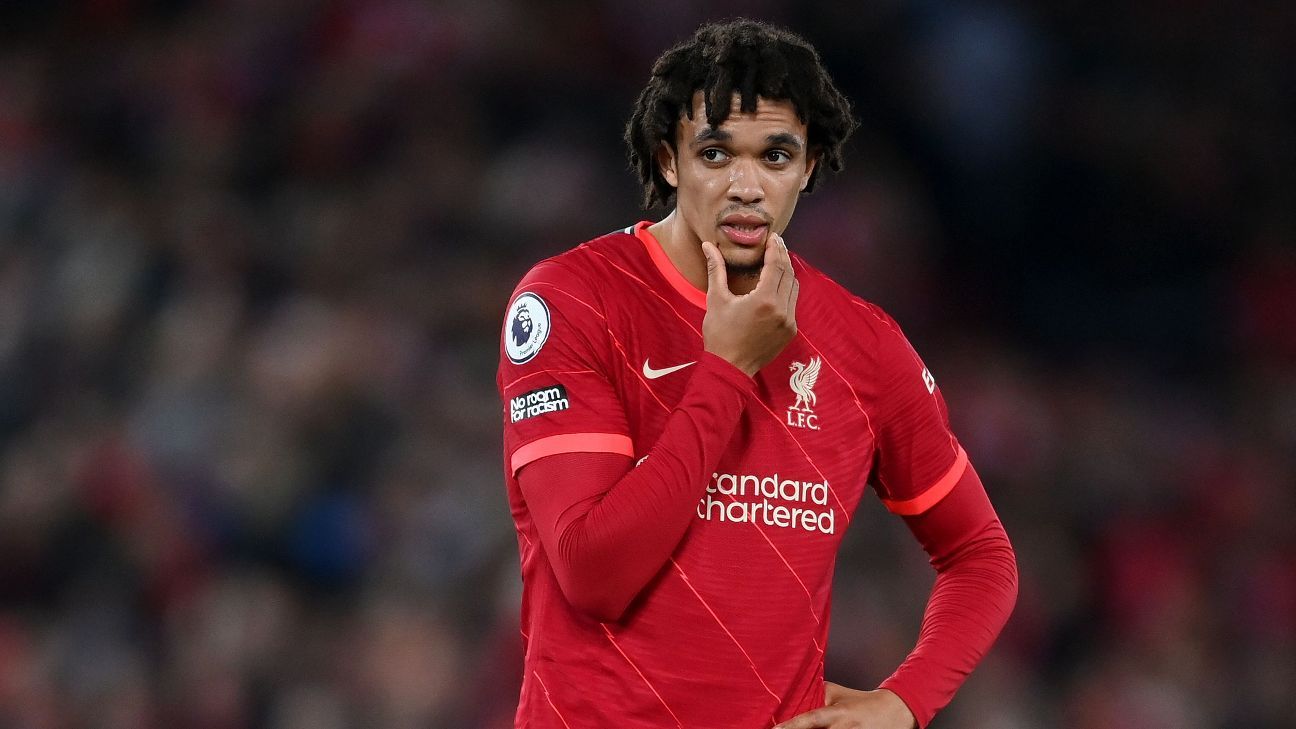 LIVERPOOL, England — The Quadruple is still on the horizon for Liverpool, but it is beginning to look like a more distant dream after Jurgen Klopp’s team finally stumbled in their pursuit a history.

Even though a 1-1 draw at home to Tottenham took Liverpool back to the top of the Premier League on goal difference, it could be short-lived with title rivals due to play Newcastle at the Etihad on Sunday. If Manchester City bounce back from their dramatic midweek Champions League exit against Real Madrid by beating Eddie Howe’s team, they will move three points clear at the top with just three games to play.

All ‘ifs’ and ‘maybes’ right now, but Liverpool knew they had to keep winning to keep the heat on Pep Guardiola’s side, and the failure to win against an impressive Spurs team has given City a much-needed morale boost at the end of a draining week.

But for an inexplicable decision by Pierre-Emile Hojbjerg in the fifth minute of stoppage time, when the Spurs midfielder headed sideways rather than at goal from six yards, Liverpool could have lost this game and suffered their first Premier League defeat since December.

Hojbjerg’s miss was significant for Spurs too. Had they won this game, Antonio Conte’s side would have moved ahead of Arsenal in the race for fourth. But the draw sees the Gunners remain a point ahead of their North London rivals and, if they beat Leeds at the Emirates on Sunday, will travel to the Tottenham Hotspur Stadium on Thursday knowing they can seal Champions League qualification with a win against their neighbours.

So, this pulsating game at Anfield ultimately ended with a draw that suits neither of the two teams, but still keeps alive fading hopes of achieving their Premier League ambitions.

“Obviously not the result we wanted, but the performance was, so with that I’m fine,” Klopp said. “It is incredibly difficult to play against an opponent with world class players and a world class manager when they have had a week to prepare and we play every three days.

“Harry Kane and Son Heung-min were completely rested, that is why it is so hard. That is why the Quadruple is so unlikely — there is a reason nobody has done it in this country. We will keep going.

“So the dressing room is not flying, come on, but there are other games to play. We just have to keep going.”

For Conte, there was a sense of frustration that his team failed to win the game, especially after Hojbjerg’s chance to seal victory late on.

“It’s not easy to play in this atmosphere,” Conte said. “It was difficult for my players with all the noise, but we played a good game and we had chances. We had a big, big chance in the final minutes and my players are disappointed. But they showed they have great desire and that is important for us.”

Tottenham’s season now rests on their battle with Arsenal for a top four spot and it could be resolved on Thursday, but Liverpool’s is multi-layered. In three weeks’ time, they could become the first team to achieve a Quadruple, yet they could also end up with just the Carabao Cup to show for their efforts if City pull clear to win the title and Klopp’s team lose to Chelsea in the FA Cup final and lose to Real Madrid in the Champions League final.

Judgement Day is coming fast in each competition, but Liverpool are still playing well. They were unfortunate not to beat Spurs and, in Luis Diaz, they have an attacking threat who has been a revelation since signing from Porto in January.

The Colombia international proved to be the match-winner after coming as a substitute against Villarreal in the Champions League semifinal second-leg on Tuesday and, against Spurs, his deflected shot from 20 yards on 74 minutes salvaged what could yet be a vital point in the title race.

Diaz has pace, incredible confidence to run at defenders and the ability to score and create, so he is beginning to make himself indispensable. Liverpool’s ambitions could rest on how often he starts, or otherwise, over the next three weeks.

Neither Chelsea or Real will want to face him at Wembley and the Stade de France respectively, but Liverpool’s performance against Spurs would also have given the two final opponents reasons for optimism.

Dan Thomas is joined by Craig Burley, Shaka Hislop and others to bring you the latest highlights and debate the biggest storylines. Stream on ESPN+ (U.S. only).

Trent Alexander-Arnold‘s defensive shortcomings were exposed on several occasions by Son, Ryan Sessegnon and Steven Bergwijn — and he was nowhere to be seen when Sessegnon passed to Son for Tottenham’s opener on 56 minutes.

Both Chelsea and Real will target Alexander-Arnold and, on the left, the loss of Andy Robertson to injury midway through the second-half will be of interest if the Scotland international has to be replaced by Kostas Tsimikas, who struggled to adjust to the pace of this game when he was substituted on for Robertson.

Liverpool are still a formidable force in so many areas, but they could only score once and almost lost the game at the end, so they are a team with vulnerabilities too.

They don’t display them very often, but every time they are exposed over the next three weeks, it could end hopes in any of three competitions.

So the stakes are increasing for Liverpool and the dropped points against Spurs have lengthened the odds against them in the Premier League. If that one proves to be elusive, it may impact on the cups too.