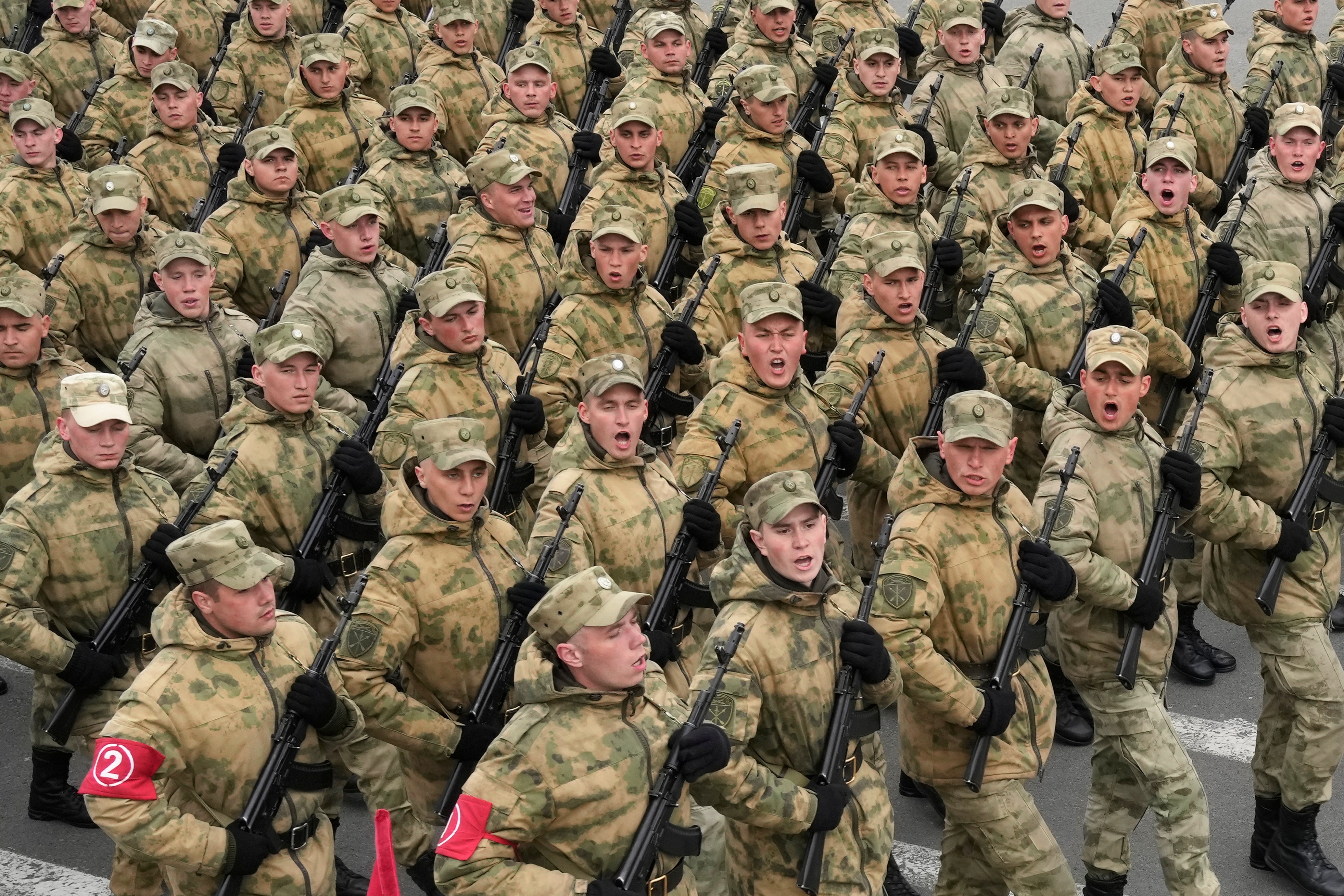 Russia is moving troops from combat zones in Ukraine to Mariupol in preparation for Russian President Vladimir Putin’s “Victory Day” parade in the southern port city, Ukraine’s Main Directorate of Intelligence of the Ministry of Defense warned Saturday.

The announcement comes just two days before military parades are scheduled to occur across Ukraine and Russia, celebrating the 1945 defeat of Nazi Germany.

Troops march during a rehearsal for the Victory Day military parade which will take place at Dvortsovaya (Palace) Square on May 9 to celebrate 77 years after the victory in World War II in St. Petersburg, Russia, Thursday, May 5, 2022.
(AP Photo/Dmitri Lovetsky)

Ukraine’s defense ministry posted a list of more than 200 high-ranking Russian military officials who have been sent to Mariupol to monitor the security situation.

Officials have said that Putin will use the parade as an attempt to prove his military success in eastern Ukraine even though brutal fighting continues in the region.

Fighting continues from the Ukrainian resistance’s final stronghold in Mariupol under the Azovstal steel plant where an estimated 200 civilians and soldiers remain trapped.

Ukrainian soldiers have refused to surrender and concerns have increasingly mounted that Russian forces will completely wipe out the remaining survivors by the May 9 parade.

Ukrainian President Volodymyr Zelenskyy said in a late-night address that he was continuing to push the Russians to honor a ceasefire and allow the evacuation of the remaining Ukrainians holed up.

“We are also working on diplomatic options to save our military who still remain at Azovstal,” he said. “Influential mediators are involved. Influential states.”

But dozens more were unable to be rescued due to Russia’s continued assault on the plant – despite repeated claims from Moscow that it would permit humanitarian evacuation efforts.

Russian Army soldiers stand in a military vehicle rolling during a dress rehearsal for the Victory Day military parade in Moscow, Russia, Saturday, May 7, 2022. The parade will take place at Moscow’s Red Square on May 9 to celebrate 77 years of the victory in WWII.
(AP Photo/Alexander Zemlianichenko)

The United Nations last week worked to broker an agreement to save the hundreds trapped under Russian shelling. But the efforts were halted by a renewed assault from Russian forces on the plant.

Ukrainian presidential adviser Oleksiy Arestovych claimed Russian troops were attempting to finish off the remaining resistance in Mariupol as a gift for Putin ahead of the May 9 parade, Reuters reported Saturday.