Bride creases up groom, guests by walking down aisle in T-rex costume 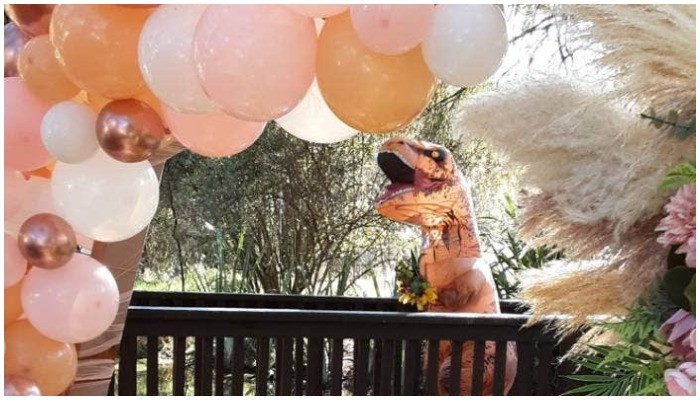 Everyone wants to make their wedding day extra special and memorable and do something different to ensure that. So a bride in New Zealand came up with the creative idea to show up at her wedding in a dress that no one would have expected – she walked down the aisle in an inflatable T-rex costume.

The hilarious wedding was reported by Emma Helleur on May 1, a wedding celebrant who has has married 31 couples in Nelson since October, 2021. She termed it “the most unique entrance she’s seen in her career.”

Helleur posted a video on her official TikTok account to show the photos of the “bridezilla”.

“The groom had his back towards the aisle but he could hear all of the guests laughing and he had no idea what was happening behind him,” she said while trying to control her own laugh.

“[…] and then he turned around was just cry-laughing. All the guests thought it was hilarious. It was very her,” Stuff quoted Helleur as saying.

The wedding celebrant declared this wedding her favourite of the season.

Helleur filmed bride Myo Thein’s big entrance which garnered over 430,000 views on TikTok, as per the publication.