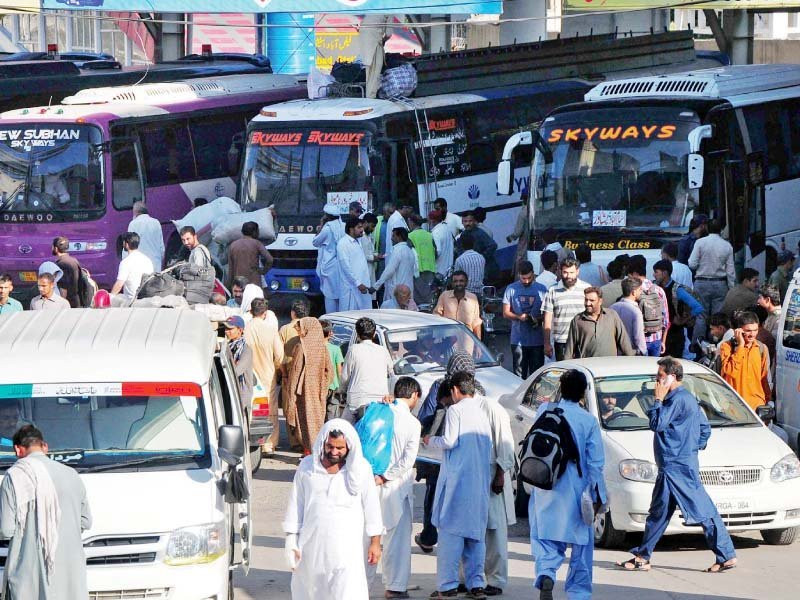 
At a time when demand for locally manufactured buses is extremely low and the original equipment manufacturers (OEMs) struggle to bear costs and keep running their plants, the transport system and infrastructure has not provided any relief either.

The main reason why intra-city bus transport is not popular is that there is no proper system and infrastructure available nor is accessible.

In the intra-city category, substandard buses are running on rickety infrastructure. Bus owners argue that weak demand from commuters, unsatisfactory return on investment due to low fares and no subsidy from the government have restrained them from updating their fleet.

Owing to the small number of buses, lack of policy and strict laws, the ordinary people can be seen commuting on the back of trucks, pickups and in three-wheelers.

The best public transport systems around the world are heavily subsidised and supported by the respective governments, making them viable and affordable for the service providers as well as the common man, they say.

In Pakistan, buses are not very much popular for intra-city travel as many people prefer two-wheelers and because of low number of buses and the lack of space in them.

In the past, Karachi has had a significant population of buses from the 1960s to the 1980s with more than 15,000 such big vehicles plying city roads. However, the situation turned worse in the wake of government’s negligence and sheer dependency on private transporters.

Now, only around 4,000 old and poorly maintained buses are running on roads and that too only on certain popular routes. Most of the buses do not have proper fitness certificates and they are mostly overloaded and jam-packed during rush hours.

In the past, the government did introduce a few public transport schemes but they could not be sustained for more than a few years due to the lack of operational planning, maintenance and repair, and funds-related issues.

Now, the government is taking positive steps for a better intra-city transport system by starting some rapid transit projects such as the ones in Karachi, Peshawar, Lahore and Islamabad.

According to a report prepared by the Japan International Cooperation Agency (Jica), Karachi needs 10,000 new city buses, however, less than 200 have been inducted by the government in the last 10 years.

To make intra-city bus transport more popular and successful, the government needs to provide support for the service operators and the common man in terms of subsidising the fares to make travel more affordable.

Also, it needs to introduce new projects to create awareness of public transport among the general public. Alongside these projects, it needs to provide feeder buses to transport passengers to and from the main lines.

The drive for transformation in the inter-city bus models started in late 2015, when a local manufacturer partnered with the world’s largest bus manufacturer to introduce the latest generation of buses in Pakistan.

Its main focus was the passenger needs and wants to travel in more luxury and safe buses. This prompted the transporters to update their fleet and thus the market observed an overall improvement in the inter-city buses.

The local manufacturer introduced the Euro 3 common rail buses for the first time in Pakistan, which were not only environmentally friendly but also consumed less fuel.

The domestic manufacturers and assemblers say they have the capability to produce such buses but they require government backing to encourage the commuters.

The local OEMs have already proved their capability by manufacturing/ assembling high-quality inter-city buses, which are running across the country.

Though the demand for public transport in Karachi is robust, the private sector doesn’t seem to be interested in investing in this area.

A major reason is that the public transport business does not provide good return on investment because of what market people say low fares and strict compliance requirements for the buses.

That’s why in most of the countries around the world, the public transport is either owned by the government or is subsidised for private transporters to make it viable for the general public.

Government support is not only required in terms of financing, but also in relation to the policies, rules and regulations, infrastructure and standards to make the public transport service sustainable and incentivise citizens to use it more.

Another reason is that the transport system in Karachi is mainly dominated by the small transporters that have 2 to 10 buses. These transporters do not have resources to invest in the modern buses.

That’s why they are mostly using the old buses and refurbished ones to get maximum return. The transporters say the current intra-city business model does not allow them to recover the capital cost of buses and this restrains them from updating their fleet.

Most of the government projects set out certain requirements, which are discouraging for the local OEMs and encourage the import of CBUs. In this regard, they cite recent projects of the Sindh and federal governments – called Green Line and Orange Line – where the authorities opted for imported buses.

The bus industry was already underutilised and was struggling to meet the operational costs due to low production volumes, and then came the new auto policy, which exacerbated their woes.

Under the policy, five new companies entered Pakistan’s market and introduced CBUs of Chinese buses at lower prices because of the advantage of low duties.

In this scenario, the demand for locally assembled buses will go down, leading to unemployment not only at the OEM level but also at the supporting vendors/ suppliers. The local manufacturers argue that the new entrants are bringing the similar buses that are already produced by the OEMs and they do not benefit the bus industry in any way.