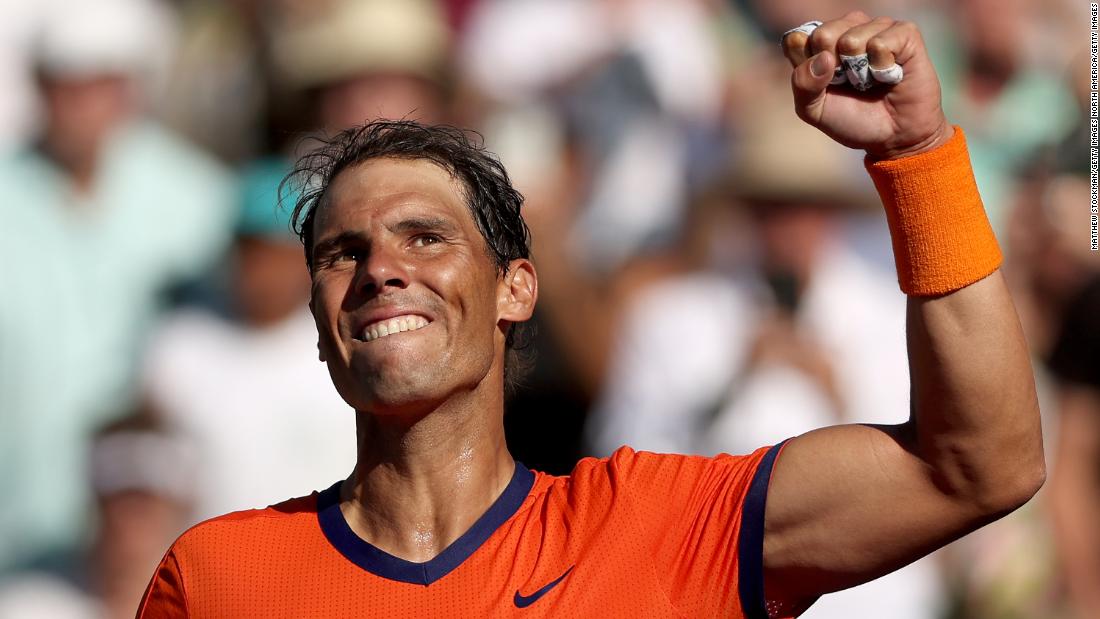 This run — during which Nadal won a record-breaking 21st grand slam at the Australian Open and titles in Melbourne and Acapulco — is the 35-year-old’s best ever start to a season.
“He is one of the toughest opponents on Tour,” Nadal said after the match, per the ATP. “It is very tough to control his weapons with his serve and forehand.

“I think I played my best match of the tournament so far today. I am very pleased with how I was able to win the match, with two difficult tie breaks. This victory means a lot to me.”

Nadal is looking for his fourth tournament win in Indian Wells after previously picking up the title in 2007, 2009 and 2013.

Up next for Nadal is unseeded Australian Nick Kyrgios, who reached the quarterfinals via walkover after round of 16 opponent Jannik Sinner withdrew through illness.

Kyrgios has been at his blistering best at times in Indian Wells and is yet to drop a set or a service game in the tournament so far.

Before Wednesday’s match, Nadal said he would be skipping the Miami Open at the end of the month as he aims to get ready for the clay court season.

Nadal didn’t play in the back half of 2021 due to knee and foot injuries and says it could be “dangerous” to transition from hard courts to clay too quickly.

“For my body, it’s not good to have quick transitions from different surfaces,” he told reporters.

“Clay to hard — well, hard to clay. If I play Miami, I will not have time to rest and no time to make a swift transition to the clay. I needed to push since the beginning [of the season] very hard, so that’s dangerous for my foot, for my knees.

“I need to make that transition step by step. I cannot make drastic changes like I did in the past, so that’s why I decided to stop after here and to have, like, three weeks before the clay court season start for me.”