Review: ‘Falling Out of Time’ Gives Song to a Father’s Grief 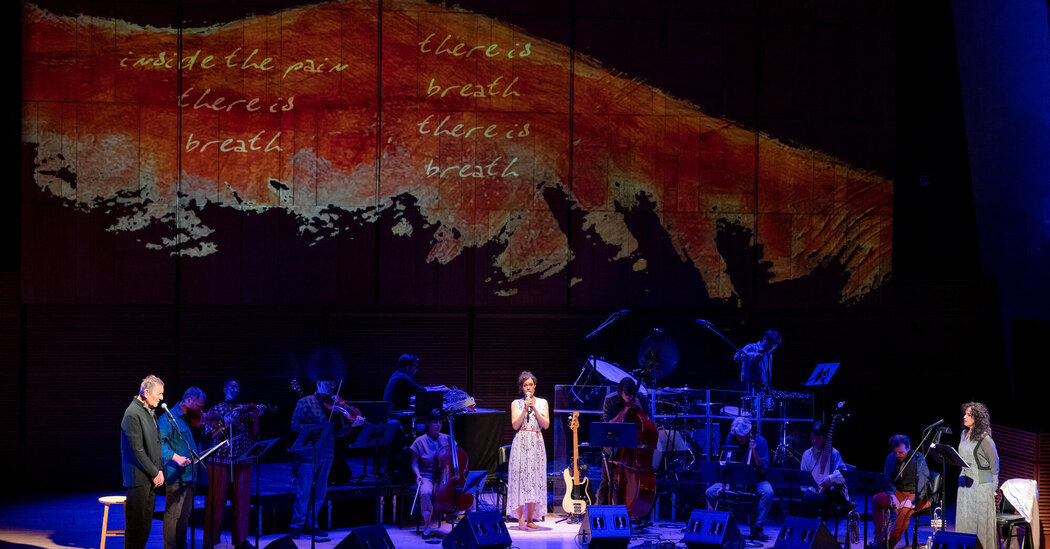 I didn’t know whether I was the right person to review the New York premiere of Osvaldo Golijov’s song cycle “Falling Out of Time” at Zankel Hall on Friday.

The work is based on the Israeli writer David Grossman’s book of the same name — part novel, play and epic poem — which expresses the grief after his son, Uri, died as a soldier in his country’s 2006 invasion of Lebanon, my parents’ homeland, which has been rocked for half a century by violent factionalism, including a civil war that took two of my father’s sisters.

At Zankel, the Silkroad Ensemble gave voice to a father’s cry across a dozen or so songs in 80 minutes. The use of folk idioms — Sephardic, Middle Eastern and something like the blues — made the performance eerily intimate and age-old, like a community’s spirit had been cracked open. The piece provides a wide embrace, one that wrapped around me, too.

Grossman’s book does not name a village or a country, nor does it assign heroes and villains in a geopolitical conflict. What it does do is describe people united in mourning. Golijov dedicated his “tone poem in voices” to the Parents’ Circle-Families Forum, an organization that brings together bereaved Israeli and Palestinian families.

It makes sense, then, that Golijov built the sound world of “Falling” out of the Silkroad Ensemble’s melting pot of instruments. There’s a classical string quartet; a jazz bass; a kamancheh, a Persian bowed instrument; a pipa, a Chinese lute, which takes the place a zither might otherwise occupy in such music; a modular synthesizer; a drum kit; a one-man brass section; and three folk vocalists who approximate Near Eastern modes without actually using microtones.

In the book, the Walking Man departs his home and leaves behind his wife to go to “there,” a place where he might reunite with his son. He walks ever-widening circles, first around his yard, then his house and finally his village. It’s an allegory of grief: You can trace it in different ways, but never escape it.

Golijov’s score unfolds deliberately, making a bane of patience: Grief will give you as much time as you need, and then it will give you some more. The strings played with broad tone. During “In Procession,” the percussionist Shane Shanahan drummed with unrushed rhythms, as the townspeople trailed up a hillside behind the Walking Man, who had become their Pied Piper of sorrow. In “Walking,” the bassist Shawn Conley plucked out a walking bass line with a dragging gait, and Dan Brantigan’s trumpet moaned like someone who was pushing through exhaustion. The synthesizer, played by Jeremy Flower, whistled an alien-sounding descant high above the other instruments — a portal to another dimension.

“Falling” is so closely tied to the strengths of the Silkroad, which commissioned the piece, that it’s hard to imagine the trumpet part without Brantigan’s intense feeling and astonishing control. Or the kamancheh without Kayhan Kalhor’s liquid bowing. Or the pipa without Wu Man’s delicacy.

Unfortunately, the same is true of the Walking Man, originally written for the Chinese vocalist Wu Tong’s raw expressivity and range, with notes so high they could make an operatic tenor’s eyes water. Yoni Rechter, a singer and musician with a long career in Israel, took the part at Zankel. He had a comforting, paternal presence, not unlike Tony Bennett, but vocally, he was tentative, imprecise and sometimes inaudible, even after taking melodies down an octave. Biella Da Costa, as the Woman, sang with deep, earth-rattling feeling. Nora Fischer narrated the show knowingly as the half-man, half-desk Centaur.

“Falling” unraveled toward the end of the night, with improvisatory blues that stood out awkwardly from the piece’s musical fabric. Fischer’s choice to speak the haunting lullaby that closes the cycle so memorably on its 2020 premiere recording diminished its impact.

In Jessica Cohen’s translation of the original Hebrew, Grossman makes a parent’s incomprehensible anguish legible: “It breaks my heart, my son, to think … that I have found the words.” At Zankel, Golijov and the Silkroad found the music — speaking for all of us who have had enough of sorrow.

Falling Out of Time