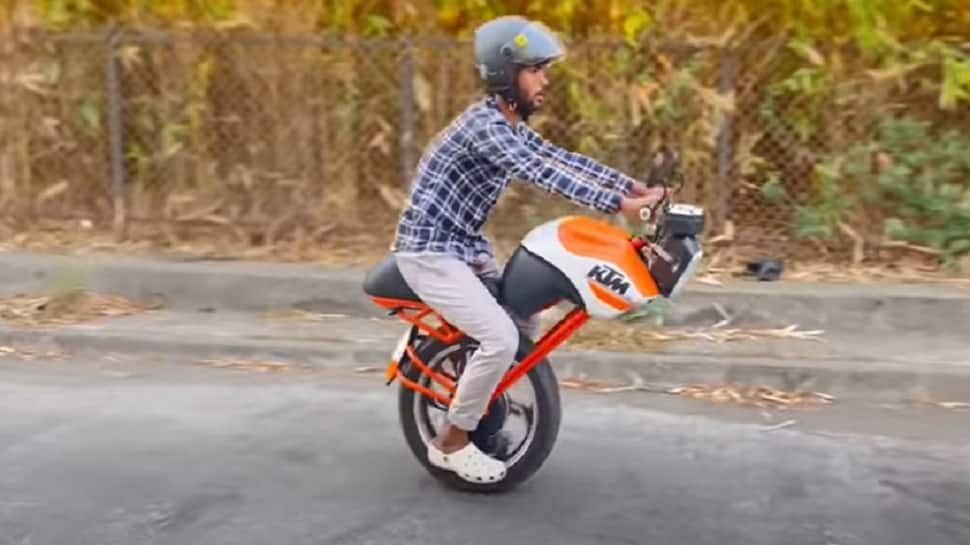 Combining modification techniques with new innovative ideas, a YouTuber has created a new one-wheeled and self-balancing KTM Motorcycle. This is not the first time the man has done something like this. He has been in the news earlier for creating a one-wheeled scooter. The creation of the man was brought in front of the public through a video uploaded on YouTube.

The video shows the man riding on his one-wheeled KTM motorcycle. The bike has been built by mounting a fuel tank on the frame of a Yamaha FZ. After which, they used pipes to create the rest of the frame. The next cut out a seat on a piece of cardboard and used the same cardboard as a stencil to cut out a cutout on a piece of metal. To make the seat, a piece of foam was pasted to the metal and then trimmed.

Moving on, the bike’s chassis was given final touches followed by spray painting the panels. The team has chosen a colour scheme similar to the colours on KTM bikes. It has got a white and orange livery.

Moving on, they assembled the bike by mounting the chassis on the wheel, which was later attached to the handlebar and tank. To complete the bike, a seat was mounted on the frame. They also added a subframe in the lower half for added strength.

The one-wheeled KTM motorcycle is powered by batteries which can be seen being assembled in the video. The bike can be turned on using an MCB on the bike. It also gets a fake headlamp on the front end.

A self-balancing sensor is the most significant feature of the scooter since it assists the scooter in self-balancing. It should be properly installed and calibrated; otherwise, the one-wheeled KTM will not stand up and balance on its own. The sensor is connected to the throttle cable by the cables.