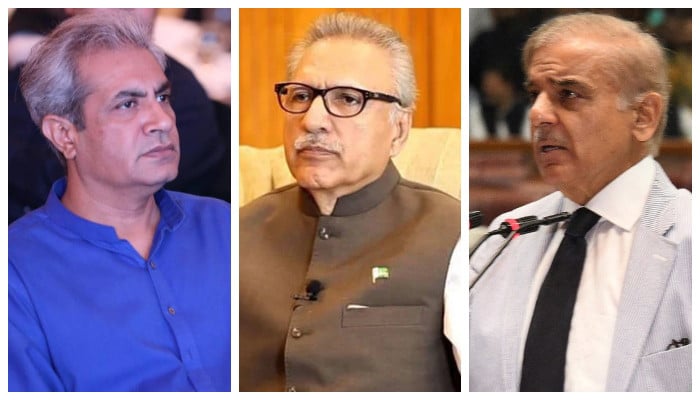 According to a statement from the President’s Secretariat, President Alvi has conveyed to the prime minister that the Punjab governor cannot be removed without his approval.

“Referring to clause 3 of Article 101 of the Constitution, he stated that ‘the Governor shall hold office during the pleasure of the President’,” the statement read.

The Shehbaz-led government had last week sent a summary to the president for the removal of Cheema and nominated Baligh-ur-Rehman for the office of governor.

Incumbent Governor Cheema has been causing problems for the PML-N in Punjab ever since he was given the post by Imran Khan during his last days in power. The governor had triggered a constitutional crisis after he was refused to administer the oath to Chief Minister Punjab Hamza Shehbaz.

Hamza was finally sworn in after the Lahore High Court ordered NA Speaker Raja Pervaiz Ashraf to administer the oath to Hamza.

Cheema had last week said that he would arrest CM Punjab Hamza Shehbaz Sharif if provided “a subedar and four soldiers” and had also asked Chief of Army Staff (COAS) General Qamar Javed Bajwa to play his “role” in the implementation of the Constitutional framework in Punjab.

Meanwhile, in the statement, the president said that the incumbent governor could not be removed as there was neither any allegation of misconduct nor conviction by any court of law or of any act committed by him contrary to the Constitution of Pakistan.

“It [is my] duty as Head of the State to represent the unity of the Islamic Republic of Pakistan in terms of Article 41 of the Constitution,” the president told the premier.

Giving another reason for rejecting the prime minister’s advice, he stated that he was convinced that the removal of the governor would be “unfair and against the norms of justice.”

The president emphasised that it was essential that the governor continue to serve his office to encourage and promote a healthy and clean democratic system, where members are not coerced or bought to bring about an illegitimate change and Article 63(A) of the Constitution “specifically discouraged such activities”.

The president further highlighted that he was “committed” to standing by the provisions of the constitution in these “difficult times”.

Highlighting the constitutional role of the Punjab governor, the president said that the governor had also sent a report earlier regarding the unfortunate happenings in the Punjab Assembly, questions regarding the validity of the resignation of ex-CM Punjab Usman Buzdar, and shifting of loyalties.