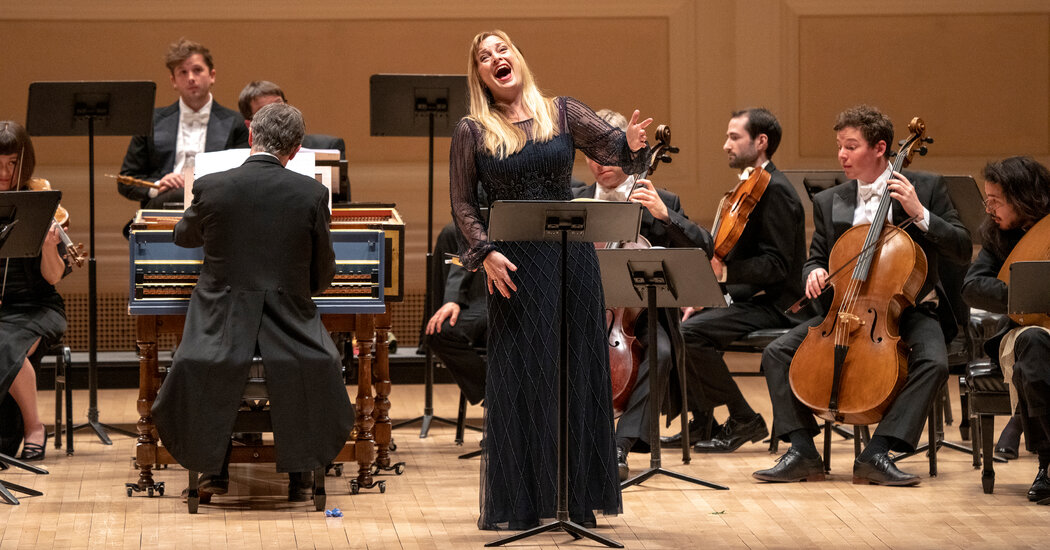 If you eat up Baroque shtick, as I do, the English Concert’s presentation of Handel’s “Serse” at Carnegie Hall on Sunday was probably right up your alley. Those with more rarefied taste were likely satisfied too, as the conductor Harry Bicket and his ensemble of early-music players offered up a surfeit of exquisite music-making.

The English Concert’s annual Handel series — this performance was the first since a shining “Semele” in 2019 — gives New Yorkers the chance to hear Baroque opera and oratorios performed by period instrumentalists of a high caliber. A certain magic occurs when Bicket gives the down beat: The players unleash gleaming rays of sound from the Carnegie stage.

The primary differences between the English Concert and a modern ensemble like the Metropolitan Opera Orchestra, which Bicket has also conducted, are its transparent texture and alert responsiveness. The English Concert can slow the tempo or shave a few decibels off the volume from one bar to the next. There’s elasticity in the way the ensemble’s sound expands and contracts, reacting to fluctuations in the intensity of the characters’ feelings and enlivening music built predominantly from strings and continuo.

Short ariettas and ariosos keep “Serse,” a comic love story, moving along. It’s peopled by serious historical characters — apocrypha be damned — and draws its humor from their unlikely humanization. Serse, the king, leverages his position to come between his brother, Arsamene, and Romilda — much to the delight of Romilda’s sister, Atalanta, who has designs on her beloved. In the process, Serse forsakes his betrothed, Amastre, who spends much of the opera fulminating while dressed as a man.

At Carnegie, the jokes started early. Lucy Crowe’s Romilda made a surprise entrance by popping up from a seat in the viola section. Daniela Mack’s Amastre proudly brandished a disguise that consisted chiefly of wearing sunglasses. Mary Bevan’s Atalanta, an incorrigible flirt, made a pass at Bicket and then at someone in the front row. Twice. And there were more conductor shenanigans, a genre mainstay of recent vintage: Bicket interrupted a tense moment in the drama to deliver a most unwelcome letter. The audience loved it.

The show’s star was undoubtedly Crowe, who tuned the color of her soprano to the music at hand. She summoned lovely, pastel tone and lambent high notes for “Nè men con l’ombre” and turned the brief but crucial duet “L’amerete?” into a fully realized scene. Clean attacks, silky legato and enchanting trills are at her disposal. If her refreshing impetuousness introduced a little roughness into her sound, it hardly mattered: She is a Handel singer to be heard.

The expressive opportunities Handel gives singers constrained rather than liberated some of the other performers. The mezzo-soprano Emily D’Angelo, who released a stirring album of contemporary songs, “enargeia,” last year, was largely humorless as Serse, a self-involved autocrat who nevertheless must plunge into romantic fancies and explosions of temper. When the music aligned with D’Angelo’s stern portrayal, as in the fiery “Se bramate d’amar, chi vi sdegna,” it gave off sparks. Her voice sharpened into focus as she propelled the aria with biting sound and fleet runs.

As Amastre, Mack’s dark, ruddy mezzo-soprano shone best against spare orchestrations. Paula Murrihy sang with polish but had difficulty finding the gravitas for Arsamene’s largely unadorned music. Mary Bevan relied on cute bits instead of phrasing to convey Atalanta’s coquettishness but connected in the character’s wounded moments. William Dazeley’s Elviro, a study in buffoonery, sneaked genuinely impressive high notes into his comic-relief responsibilities. As Ariodate, Neal Davies showed off a trim bass-baritone with some pep in it.

With three hours of glorious music, the English Concert nearly banished memories of the three years it took for the ensemble to return. Next up: Handel’s “Solomon” — in only 10 months’ time.