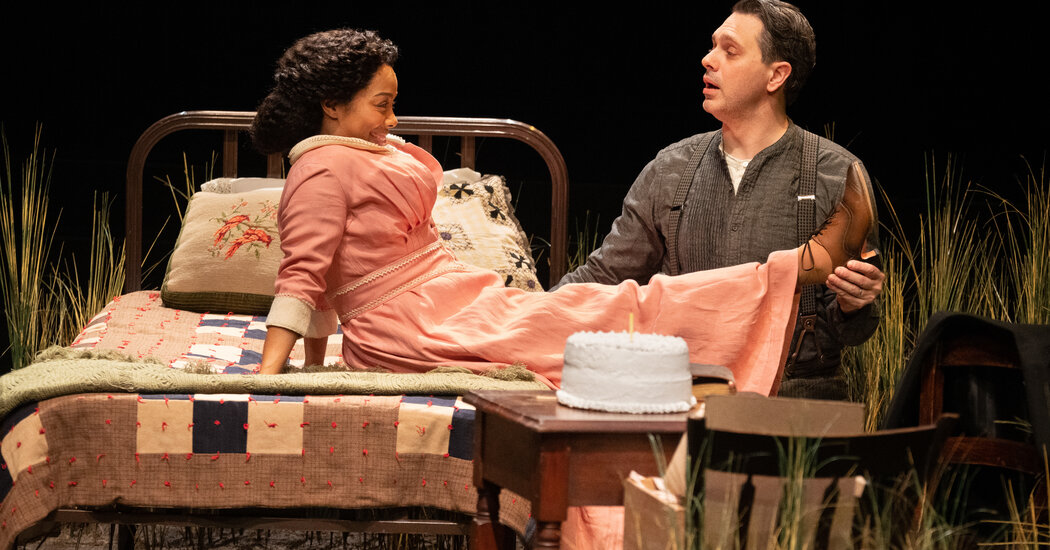 What troubles the women, especially Fanny, is the danger to Julia and to the community if a white man is found in a Black woman’s bed. And Herman (Thomas Sadoski) is not just white but poor: a barely scraping-by baker from a family he describes as “redneck crackers.” Because he still owes his mother, who staked him the money to open his shop, more than he has ever been able to earn, he and Julia can neither live openly in South Carolina nor move, he feels, to a state where the laws are different.

It is therefore no idle symbol that the wedding band he gives Julia for their anniversary is presented on a chain to wear around her neck; he knows she cannot wear it on her finger. And as the genteel setup of the first act turns to tragedy in the second after Herman falls ill, that chain begins to weigh and cut. Unable to call a doctor lest she wind up in jail for miscegenation, Julia is left to the mercy of Herman’s sister (Rebecca Haden) and mother.

That mercy is not forthcoming. The mother, in Veanne Cox’s terrifyingly reptilian performance, can barely contain her disgust long enough to evacuate her son by cover of night. As she spews her racist venom, both Julia and the ailing Herman spill their own, and the hate of the subtitle supplants the love.

Cox’s extended confrontation with Bradford — a cataclysm and catharsis of a country’s worth of mutual fury — is thrilling and awful and important to watch; but so is Bradford alone, even with no lines, when she is forced to leave her bedroom as the whites take over. Sadoski, too, is excellent, in the less explosive role of a man who discovers, as all of us must, that the harm he has done is no less destructive for having been unconscious. The rest of the cast likewise embodies and then throws in our laps the difficulty of love under what amounts to vicious apartheid.

Timpo’s production, with the audience seated on three sides of the long, T-shaped stage, emphasizes that reckoning, forcing us to stare through the story at one another’s reactions. (The set is by Jason Ardizzone-West.) It is also meticulously costumed (by Qween Jean) to pin down the characters’ social status, and sympathetically musicalized, not just in the spirituals and folk songs sung by the cast but also in an exceptionally fine scene-setting score, full of bluesy plaint and pain, by Alphonso Horne.

If the shifts in Julia’s personality are perhaps too sudden, compacted into the course of one weekend, that slight incoherence is one of the play’s pleasures. Even more than Childress’s “Trouble in Mind,” admirably revived last year by the Roundabout Theater Company, “Wedding Band” embraces its characters’ confusions, letting its arguments wander widely instead of making beelines, as is the more recent fashion, toward Big Points. Confusion is in fact the point; how could a story like this pretend to clarity?

It’s the useful kind of confusion, though: the kind that jangles but does not preach — and the kind our theater needs more of. When Julia, in despair, cries out, “I don’t want any whiteness in my house,” you feel the house she means includes the one you’re sitting in. You may wonder how, in either place, the worn-out double bed of America’s rocky marriage could possibly still be standing.