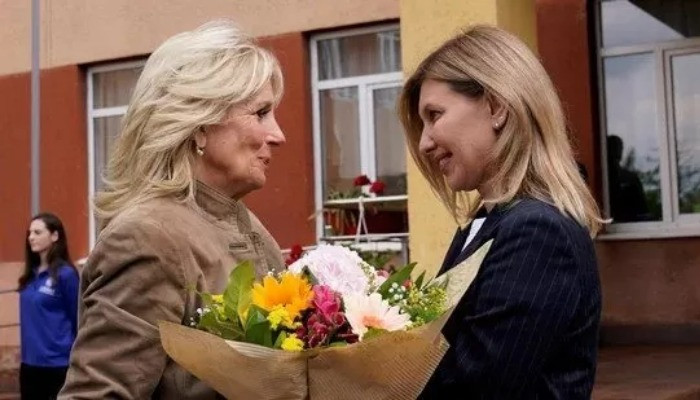 BRATISLAVA: US First Lady Jill Biden made an unannounced visit to Ukraine on Sunday, meeting her Ukrainian counterpart Olena Zelenska at a school sheltering civilians displaced by the war.

“I wanted to come on Mother’s Day. I thought it was important to show the Ukrainian people that this war has to stop and this war has been brutal and that the people of the United States stand with the people of Ukraine,” Biden told reporters.

The 70-year-old wore a large pin in the form of the blue and yellow Ukrainian flag.

She travelled to Ukraine from Slovakia as part of a regional tour that included Romania and was meant to be yet another display of American support for Ukraine and the countries assisting it in the wake of the Russian invasion.

A US official travelling with President Joe Biden’s wife also said it was Zelenska’s first public appearance since Russia invaded Ukraine on February 24.

“Because we understand what it takes for the US first lady to come here during a war when the military actions are taking place every day, where the air sirens are happening every day, even today,” she told Biden.

“We also feel your love and support during such an important day,” the Ukrainian said.

Following a closed-door meeting, the first ladies joined local children in a classroom crafting cardboard and tissue paper bears as presents for their mothers.

Biden and Zelenska both crafted their own bear, using white and yellow tissue paper.

During their face-to-face talks, Biden asked Zelenska how she was holding up as a mother during wartime. She and President Volodymyr Zelensky have a 17-year-old daughter and a nine-year-old son.

Zelenska said she was grateful that she “is able to hold her children’s hands every night even though she can’t be with her husband,” said Michael LaRosa, a spokesman for Biden.

Zelenska also said her biggest concern right now is the mental health of children, soldiers and other people in Ukraine, he said.

Biden first expressed an interest in March in visiting Ukraine but the opportunity did not arise until later, LaRosa said.

After the unannounced trip to Ukraine, Biden returned to Slovakia.

There she had met earlier with refugees, aid workers and residents in the city of Kosice and the village of Vysne Nemecke. In Bratislava, she met with US embassy staff and government officials.

Nearly 5.5 million refugees have fled Ukraine since Russian President Vladimir Putin launched his invasion, according to the United Nations. More than 360,000 of them have crossed into Slovakia, according to UN figures.

In Romania, too, Biden met with Ukrainian refugees on Saturday and praised them as “amazingly strong.”

“We stand with you, I hope you know that,” she said at a school in Bucharest, accompanied by her Romanian counterpart Carmen Iohannis, according to images transmitted by TVR public television.

More than 810,000 Ukrainians have entered Romania since the start of the war, according to UN figures released on April 29.