WHO vs India: How Many People Really Died Of Covid? | Hot Mic with Nidhi Razdan 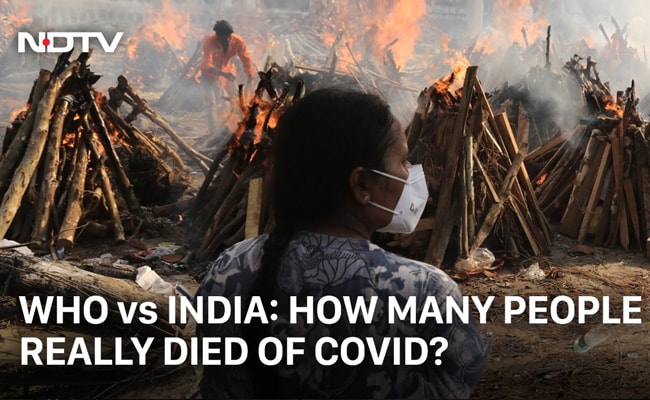 This is Hot Mic and I’m Nidhi Razdan.

The World Health Organization has claimed that Covid could have killed as many as 47.4 lakh people in India in 2020 and 2021, either directly due to infection or through its indirect impact. This figure is 10 times the country’s official death toll of 4.81 lakhs at the end of 2021. India has strongly rejected these figures, setting off an ugly spat with the WHO. So, how exactly did the WHO arrive at these figures and did India vastly under-report the number of people who died from Covid? Or is the WHO’s methodology problematic as India claims? First, let’s understand that in a pandemic it’s not always possible to say whether a death was from Covid or not. So, the number that actually becomes important for experts is what is called “excess mortality.” Excess deaths are very simply a measure of how many more people are dying than expected compared with previous years.

Although it is difficult to say how many of these deaths were due to Covid, they can be considered a measure of the scale and toll in a pandemic. Now, the WHO report says that the deaths that are linked  indirectly to Covid are those that happened due to conditions for which people were unable to access treatment because hospitals were overburdened. It also accounts for fewer deaths having taken place due to road accidents, etc. because lockdowns were in place in large areas. One of India’s main arguments is that the WHO has gone by mathematical modeling and not real data on deaths which are recorded by India’s Civil Registration System or the CRS. Now, the WHO numbers were released just two days after India CRS released its annual data for deaths for the year 2020. CRS data for 2021, the second and more devastating pandemic year, is still not out. The CRS, by the way, does not record the specific causes for deaths, so it gives you an overall picture.The Indian government says it had shared the 2020 data with the WHO, which it says ignored the findings. But the WHO says that India’s figures for 2020 only came a couple of days before they published their report and they will incorporate this in  their next update. Now as several experts point out, death registration data in India is not available from all states at the same time and is not always up to date which is why modeling studies then become important and relevant. If this data was readily available, then estimating excess deaths would be much simpler and much easier.

Now, for the WHO report, the world body relied on official figures of annual deaths that came from 17 Indian states until December of 21. And they also say they depended on media reports that had obtained figures through the Right to Information Act or the RTI. Dr. Randeep Guleria, the head of AIIMS, however, criticized the WHO for this method. He said that they’re relying on “hearsay evidence from the media or from unconfirmed sources.” India has reasoned that owing to its large area, diversity and a population of 1.3 billion, there cannot be a one-size-fits-all approach and model which may be applicable to smaller countries but cannot apply to India. Importantly, 2021 was the year that India was badly hit by the Delta wave when the number of deaths due to Covid are expected to have been much higher and those official figures from India are not ready yet. While the Indian government and the WHO, the W.H.O., are in a war of words, the fact is that other agencies do have claimed under-reporting by India, such as The Lancet. India typically counted Covid deaths only in the cases that were confirmed through lab testing, which means that during the Delta wave in particular when testing resources were in short supply, and health care systems overwhelmed, many suspected Covid deaths likely fell through the cracks. It’s also not easy counting the dead in India. About half of the total deaths occurred at home, according to official data, especially in villages. And women are often undercounted and registration is especially low in the poorer states such as Uttar Pradesh and Bihar.

So, yes, it is very likely that India has under-reported Covid deaths, though the dispute would be over the number – will it be as high as the WHO data suggests? We don’t know. However, there are some other important nuances as well. One is that India has not stopped counting Covid deaths even now. Kerala, for example, has counted over 20,000 Covid deaths over the last four months but not all of them have happened this year and they’ve been doing a huge backlog. India has, however, also made a habit of questioning the methodology of every agency does not agree with whether it’s the WHO or the Reporters Without Borders World Press Freedom Rankings or World Democracy Indices by The Economist and others. And the rebuttal is always the same. We do not agree with the methodology. Counting Covid deaths is not just about keeping records. It is about learning from the pandemic and preparing for future outbreaks, as well as strengthening our health systems. So if we can learn from this controversy with the WHO, we will do ourselves better in the long run.