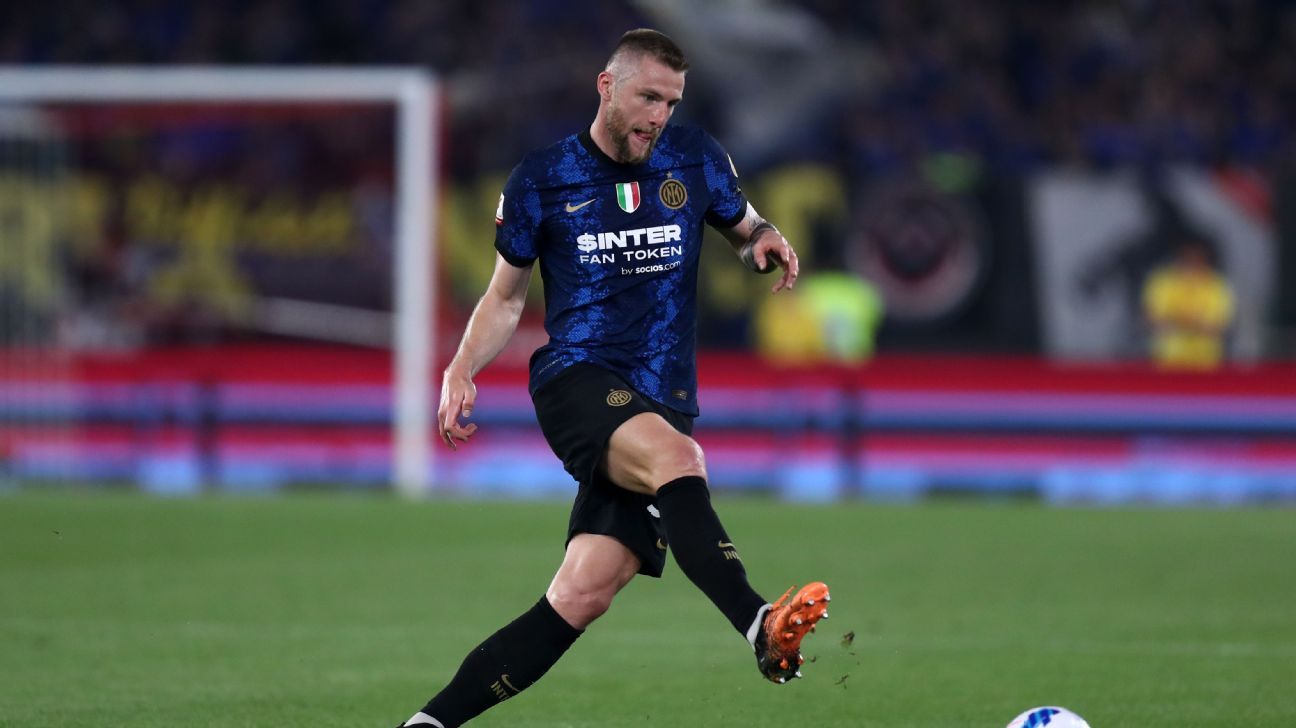 Manchester United, Chelsea, and Tottenham Hotspur are all keen on Internazionale defender Milan Skriniar, which has prompted the defending Serie A champions to offer him a new deal, according to Gazzetta dello Sport.

Those Premier League sides have expressed interest in acquiring the 27-year-old centre-back in the summer, and that has seen Inter move quickly to try to secure him down to a long-term deal.

The Nerazzurri are looking to offer the Slovakia international a five-year contract that would see his stay extended until the summer of 2027, with a salary that would increase each year, starting €4.5million-per-season.

Skriniar has been a key player for Simone Inzaghi’s side in the current campaign, making 34 starts in a season that could see Inter repeat as champs on Sunday, though they will need their neighbours AC Milan to slip up in an away clash against Sassuolo.

Having completed their takeover of Newcastle last October by buying out previous owner Mike Ashley, the Saudi Arabia-backed consortium which now controls the club invested over £90 million in new signings during the January transfer window, including England defender Kieran Trippier and Brazil midfielder Bruno Guimaraes.

But while sources said that head coach Eddie Howe will be backed in the transfer window with substantial funds this summer, agents and clubs have been made aware that Newcastle’s new owners will not pay excessive fees or wages in order to bolster their squad.

Newcastle failed in a January attempt to take Lingard on loan for the second half of the season, with Manchester United’s owners, the Glazer family, only prepared to offload the 29-year-old in a permanent transfer with a fee attached. But while Lingard will be available on a free transfer when his Old Trafford contract expires at the end of June, sources said that Newcastle’s owners will not sanction a substantial signing-on fee or excessive wages to land the England international.

Newcastle’s stance on Lingard has reverberated around the game, with sources telling ESPN a number of clubs and agents are waiting to see how Newcastle progress in the early weeks of the transfer window before attempting to do business the club.

10.08 BST: Arsenal and Netherlands forward Vivianne Miedema has rejected interest from Barcelona and Paris Saint-Germain to sign a new contract with the north London club.

The Women’s Super League 2021-22 Golden Boot runner-up had reportedly held talks with several top European clubs with her contract due to expire this summer. However, Arsenal have announced that she has opted to stay in England.

Arsenal signed Miedema in 2017 from Bayern Munich and the 25-year-old has gone on to break multiple records in the WSL. She is the top scorer in the league’s history and in March became the first player in WSL history to reach 100 goal involvements. She is also the only player ever to score against every team she has faced in the league.

09.21 BST: Ousmane Dembele will make a counteroffer to Barcelona’s latest renewal proposal next week, according to Diario Sport.

Bayern Munich, Chelsea and Paris Saint-Germain are interested in signing the French winger, who becomes a free agent this summer. Dembele, who was close to leaving Barca in the winter transfer window, is keen to remain at Camp Nou.

His agent, Moussa Sissoko, will meet with Barca representatives next week for further contract-extension talks in the hope of making a final decision soon. According to Mundo Deportivo, Sissoko’s wage demands are still far from what Barca have offered the player.

Barca know the deal to keep Dembele is unlikely and have already considered his replacement, Leeds winger Raphinha. The 25-year-old Brazil international has scored 10 goals in 35 appearances for Leeds this season.

08.44 BST: Federico Bernardeschi, 28, will play his last game for Juventus at Fiorentina on Saturday, according to Tuttosport.

Following a meeting between club executives and Bernardeschi’s agent, it was agreed by mutual consent for the player not to continue in Turin beyond this summer, when his contract expires.

The Italy international has made 182 appearances for the Bianconeri and won three league titles, two Coppa Italia among other trophies in his five seasons with the Turin giants.

08.00 BST: Arsenal are weighing up their options after being told Manchester City will demand £55m for Gabriel Jesus this summer, sources have told ESPN’s James Olley.

Arsenal are in the market to sign at least one forward and have sounded out the 25-year-old over a possible move.

Initial contact has now been made between the two clubs and sources have told ESPN that Arsenal have baulked at City’s valuation given he only has one year left on his contract.

However, the amount is based on City’s respect for the player — who has scored 95 goals in 235 appearances — but also a desire to recoup the €60m fee paid to Borussia Dortmund to sign Erling Haaland.

City boss Pep Guardiola would prefer to keep Jesus but will not stand in the striker’s way if he pushes to leave.

Arsenal will wait to see what European competition they qualify for this weekend before deciding their next move but sources have told ESPN that Arsenal did not expect to finish in the top four this season and therefore their long-term budgeting has not been significantly affected by the recent slump.

– Barcelona are considering making a move for Valencia star Goncalo Guedes, writes Mundo Deportivo. Los Che are looking to move on the 25-year-old forward this summer, and are looking for a fee of around €40m. It is expected that more talks will take place between the two sides before any final decision is made by the Blaugrana, with Atletico Madrid also reported to be interested in his services.

– AC Milan are interested in signing Morgan Gibbs-White, according to The Athletic. The 22-year-old has been a standout performer this season while on loan at Sheffield United from Wolverhampton Wanderers, and it looks as though the San Siro could look to tempt him to Serie A, despite his plans to garner more first team action in Bruno Lage’s side next season.

– West Ham United have identified Moise Kean as a possible alternative option to Michail Antonio, reveals Calciomercato. The 22-year-old forward Keane is on loan at Juventus from Everton, but the Serie A side recently met with the Hammers in talks over a possible deal. The Bianconeri have an option to make his stay permanent with a fee in the region of €35m.

– Kylian Mbappe will make the final decision over his future on Sunday, reports Foot Mercato. Real Madrid were recently reported to have agreed on terms with the 23-year-old France international, but Paris Saint-Germain have been working hard to do everything they can to keep him at the Parc des Princes.

– Tottenham are eyeing a move for Barcelona centre-back Clement Lenglet, according to Sport. The Premier League side have enquired about a possible loan deal until the end of the season, and they would be willing to cover a large part of the 26-year-old’s €6m-per-season salary. The Blaugrana would prefer a permanent move, but they could be willing to allow him to leave on loan if that is not possible, with the France international making just six starts in LaLiga this season.