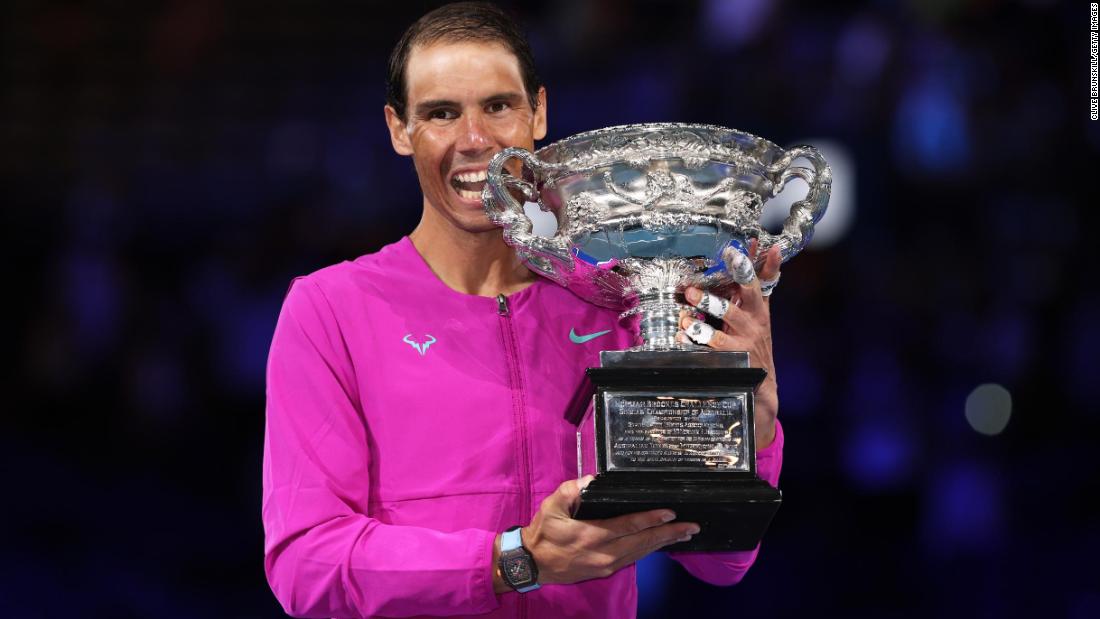 The three had been tied on 20 for a while, but after overcoming a long-running foot injury, Nadal now stands a step above the members of tennis’ “Big Three.”

However, although he recognized his achievement in winning his record-breaking grand slam title, Nadal admitted it doesn’t change his outlook on his career or legacy.

“No, I don’t want to change my point of view, honestly. Of course, for me, it’s amazing to achieve another grand slam at this moment of my career. Just means a lot to me,” he told reporters.

“I feel honored. I feel lucky to achieve one more very special thing in my tennis career. I don’t care much if I am the one or not the one or the best of the history, not the best of the history. Honestly, today, I don’t care much. For me, it’s about enjoying nights like today. That means everything for me, no? Means even more to achieve the second Australian Open more than any other thing.”

So with Nadal looking like he’s returning to his best tennis, with Federer continuing to struggle with injury and questions surrounding Djokovic’s participation in future events due to his Covid-19 vaccination status, what could the future hold for the superstars of the sport?

‘I am proud to share this era with you’

Nadal, Federer and Djokovic have lit up tennis over recent years, doing battle on numerous occasions and delivering some famous encounters.

Both Federer and Djokovic were quick to congratulate Nadal on social media after his victory on Sunday.

“What a match! To my friend and great rival (Nadal), heartfelt congratulations on becoming the first man to win 21 Grand Slam titles,” Federer wrote on his Instagram stories.

“A few months ago, we were joking about both being on crutches. Amazing. Never underestimate a great champion. Your incredible work ethic, dedication and fighting spirit are an inspiration to me and countless others around the world.

“I am proud to share this era with you and honored to play a role in pushing you to achieve more, as you have done for me for the past 18 years. I am sure you have more achievements ahead but for now enjoy this one!”

Djokovic wrote on Twitter: “Congratulations to (Nadal) for 21st GS. Amazing achievement. Always impressive fighting spirit that prevailed another time. Enhorabuena. (Medvedev) gave it his all out there and played with the passion and determination we have come to expect from him.”

The 40-year-old Federer has been struggling with a knee injury, which is the reason he’s been absent from the court.

World No. 1 Djokovic — arguably the favorite to win the tournament beforehand — was deported from Australia after losing a court challenge against the Australian government’s decision to cancel his visa on public health and order grounds.

The second grand slam of the year is the French Open at Roland Garros which begins on May 22.

Nadal, now returning to full fitness, is sure to be the heavy favorite on the clay courts of Paris having won a record 13 French Open titles.

Djokovic’s availability at the grand slam in France is still in doubt as the country’s Sports Ministry told CNN earlier in January that all professional athletes who wish to compete in France will have to be vaccinated against Covid-19.

France’s vaccine pass law, approved by parliament in January, will require people to have a vaccine certificate to enter public places such as restaurants, cafes, cinemas and sports arenas, among others.

“The rule is simple. The vaccine pass will be required once the law comes into force in institutions that were already subject to the health pass (sporting or cultural). This will apply to everyone (spectators, professional sportspeople),” a French Sports Ministry spokeswoman told CNN.

That new legislation puts the chances of Djokovic, who has not been vaccinated against Covid-19, competing at Roland Garros in jeopardy.

Nadal and Federer are older though than the 34-year-old Djokovic — Nadal is 35 and Federer is 40 — meaning the Serbian does have time on his side to be able to try and catch Nadal.

But with a new crop of tennis superstars blossoming at the moment — with Medvedev at the forefront alongside Alexander Zverev, Stefanos Tsitsipas, Andrey Rublev, Casper Ruud and Felix Auger-Aliassime amongst others — staying at the top has never been more difficult for tennis’ greatest ever players.